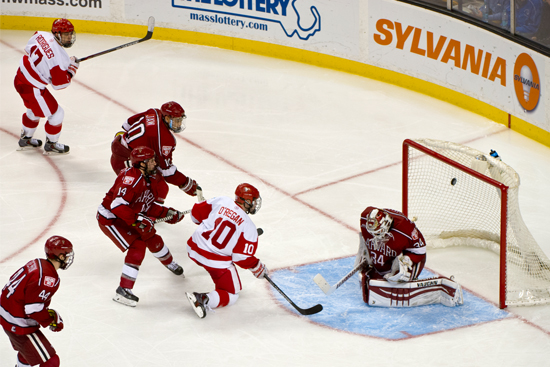 For the first time in more than 30 years, the BU men’s and women’s ice hockey Terriers played in the annual Beanpot Tournament on the same night. A heavy snowstorm postponed the first round of the men’s tournament from Monday evening to Tuesday. It turned out to be a victorious evening for the men, who pulled off an exciting 4-3 double overtime victory against Harvard at TD Garden. For the women, who had hoped to make it a twosome, a disappointing loss to Harvard dashed their chance to win their first Beanpot trophy as a varsity team. The men advance to the Beanpot championship next Monday against Northeastern, which bested Boston College in the other semifinal; the icewomen play in the Beanpot consolation game the following night against Northeastern, which fell to Boston College in the first semifinal.

It took 82 minutes and 18 seconds of play, but the Terrier men’s ice hockey team punched their ticket to the Beanpot final for the first time since 2012 when Danny O’Regan (COM’16) scored the double overtime goal that lifted BU to victory over Harvard. The Crimson played valiantly, thanks in large part to goalie Steve Michalek, who made a whopping 63 saves out of 67 attempts, but in the end it’s the Terriers who will shoot for their 30th Beanpot trophy next Monday night at TD Garden against Northeastern.

O’Regan’s goal came following a turnover in the Harvard zone. Evan Rodrigues (SMG’15) fed O’Regan, who one-timed the pass past the apparently unstoppable Michalek. It was O’Regan’s team-leading 18th goal of the season. Jack Eichel (CGS’16) got an assist on the goal, giving him 41 points on the season—a tie for most points in the NCAA.

This was the fourth double overtime in Beanpot history. Boston University played in a triple overtime semifinal 50 years ago against Northeastern, winning 5-4.

The game began at 5 p.m. in a largely empty TD Garden, the result of a massive evening rush hour traffic tie-up that crippled much of Boston. The gridlock was caused by the remnants of Monday’s storm. However, a large contingent of BU students was on hand to cheer on their team. The atmosphere in the arena changed during the overtime periods as Northeastern and Boston College fans awaiting their 8 p.m. semifinal game began rooting for Harvard—much to the consternation of Terrier fans.

Terrier Nation didn’t have much to cheer about during the game’s first 30 minutes. After Cason Hohmann (SMG’15) scored the first goal of the game to give the Terriers a 1-0 lead, the Crimson made three consecutive goals to carry a 3-1 lead at midpoint.

The Terriers responded with two unanswered goals, from Nikolas Olsson (CGS’16) and Ahti Oksanen (COM’16), to even the score heading into the second intermission. Oksanen’s goal came with just 23 seconds left in the second period.

During the third period, BU launched an assault, registering 12 shots before the Crimson could get off their first of the period, but the Terriers failed to capitalize on their chances.

Harvard’s best opportunity to take the lead was thwarted when goalie Matt O’Connor (SMG’16) turned away a Harvard shot during a scrum in front of the net midway through the third period. Several Harvard players began celebrating, erroneously thinking the puck had crossed the goal line, but officials reviewing the play in video replay ruled that it hadn’t, keeping the score knotted at three.

Harvard’s biggest challenge of the evening was in attempting to shut down forward Eichel, who came into Tuesday night’s game with 15 goals and 40 points and is expected to be an early pick in June’s NHL draft. They managed that feat until the second overtime period, when Eichel recorded his lone assist.

This was the second time this season Boston University and Harvard duked it out in overtime. The Crimson defeated the Terriers 3-2 on November 25.

The Terriers will return to TD Garden next Monday to face Northeastern in their quest for a 30th Beanpot title.

It took only 34 seconds for Harvard to grab the lead in the women’s Beanpot Tournament semifinal last night at Harvard’s Bright-Landry Hockey Center. The goal from sophomore Sydney Daniels set the stage for the Crimson domination of all three periods and a surprisingly definitive 9-2 victory. Daniels wasted no time before striking again, directing a breakaway pass to the stick of senior Lyndsey Fry, who took the puck home. While Harvard was striking, the Terriers skated for seven full minutes without taking a shot, and when the first period ended, the Crimson had a comfortable 2-0 lead.

Poulin, who competed for Canada in the 2010 Winter Olympics in Vancouver and in the Sochi Winter Olympics last February, when the Canadians clinched their second gold, has scored 17 goals and 30 points in just 20 games. Lefort is second in goals, with 15, and Tutino is tied for team lead in assists, with 16. The Terriers have also received plenty of support from Victoria Bach (CGS’16), who has tallied 14 goals. Last night, however, the Terrier standouts appeared to stand down.

The second period pounding by Harvard started with a goal by Crimson junior Mary Parker off a pass from sophomore Abbey Frazer. Just seconds later, senior Hillary Crowe put one in off the post, and two minutes after that Crowe scored again, with an assist from junior Miye D’oench.

Long overdue, BU got on the scoreboard when Lefort took a pass from Poulin and put the puck in the net, but 13 seconds later Harvard freshman Dani Krzysczyk responded with a goal, and in less than a minute Crimson junior Jessica Harvey had bounced the puck in off the top to the goal, giving Harvard three goals in three minutes and six seconds.

The third period started with another goal by Harvey, which was answered by Bach, who was in turn answered by Crimson senior Samantha Reber. When the final buzzer sounded, it was Harvard 9, BU 2, with the Crimson outshooting the Terriers 32 to 14.

The women’s ice hockey Terriers will play Northeastern in the tournament’s consolation game next Tuesday, February 10, at the Bright-Landry Center at Harvard.

The BU men’s ice hockey team takes on Northeastern in the championship game of the 63rd annual men’s Beanpot Tournament on Monday, February 9, at 8 p.m. at TD Garden, 100 Legends Way, Boston. Harvard and Boston College play in the consolation game at 5 p.m. at TD Garden. Ticket prices and information can be found here. The game will be televised on NESN.

The BU women’s ice hockey team goes up against Northeastern in the consolation game of the 37th annual women’s Beanpot Tournament on Tuesday, February 10, at 4:30 p.m. at Harvard’s Bright-Landry Hockey Center in Cambridge. Boston College and Harvard play in the final, at 7:30 p.m. at the Bright-Landry Hockey Center. Tickets are available at the Harvard online ticket office. The games will be streamed live on ESPN3.

Mixed Bag for BU at Beanpot