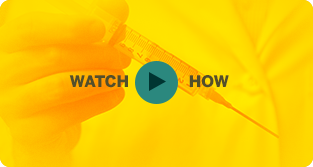 An estimated 27 million Americans suffer from osteoarthritis, a degenerative disease that destroys cartilage and underlying bone in knees, hips, fingers, and spine. Those living with the condition endure daily pain and stiffness.

While pain medication, physical therapy, and weight loss all help alleviate symptoms, there’s no known cure for this most common form of arthritis. The best solution for patients in late stages of the disease is a hip or knee replacement, but those replacement parts typically last only about 15 years. With a great many Americans living into their 80s, those who develop osteoarthritis at midlife face an unpleasant choice: either forego surgery and live with pain, or opt for a joint replacement and hope that it won’t wear out before they do.

It’s the type of medical challenge Mark Grinstaff and his lab, the Grinstaff Group, enjoy tackling.

“The more challenging a problem is, the more it drives us to think about it in the most critical and creative ways that we can,” says Grinstaff, a College of Arts & Sciences professor of chemistry, a College of Engineering professor of biomedical engineering, and a member of the ENG Division of Materials Science and Engineering. “If we can develop therapies that will address the early and middle stages of osteoarthritis, that can be very valuable.”

Since he arrived at BU 11 years ago, Grinstaff and his graduate students have spun three biotech companies out of their bench research. Flex Biomedical is one of them. Grinstaff and Michel Wathier, one of his former postdoctoral fellows in chemistry, cofounded the company in 2008, after creating a viscous polymer that when injected into animals’ joints improves lubrication and lasts longer than one of the leading osteoarthritis products on the market, Synvisc-One, made by Genzyme. Group members hope to get their polymer into clinical trials and receive the US Food and Drug Administration’s stamp of approval within three years.

In the video above, Mark Grinstaff and members of the Grinstaff Group discuss how they are developing new ways to diagnose and treat osteoarthritis, a degenerative disease that destroys cartilage and underlying bone in knees, hips, fingers, and spine.

Meanwhile, 5 of the Grinstaff Group researchers, a cadre of more than 20 graduate students and postdoctoral fellows with expertise in chemistry, pharmacology, and biomedical and mechanical engineering, are attacking osteoarthritis from other angles. While some members are investigating various polymers for their lubrication and creating a new polymer that reinforces diseased cartilage, others are developing a more accurate method to diagnose osteoarthritis. They split their time between Grinstaff Group headquarters on the fifth floor of the Metcalf Center for Science and Engineering and the Beth Israel Deaconess Medical Center labs of their clinical collaborator, Boston Children’s Hospital orthopedic surgeon Brian Snyder.

Chemistry postdoctoral fellow Cynthia Ghobril is addressing the first obstacle by developing new synthetic high molecular weight polymers as biolubricants for the cartilage. When injected into a joint, they would stick to the cartilage surface and restore some degree of lubrication between long bones. This strategy would allow the polymers to remain in the joint longer. Ghobril hopes that eventually her polymers will stay in place for several months instead of several days, so patients would require injections only a couple of times each year to manage pain.

Benjy Cooper (GRS’16), a chemistry doctoral candidate, is tackling the second problem by developing a polymer that helps cartilage retain its mechanical integrity. So far, Cooper has tested his molecules on cartilage and bone cores from cows. After refining his polymer in cellular assays and in small animals, he plans to test it in large animal studies. 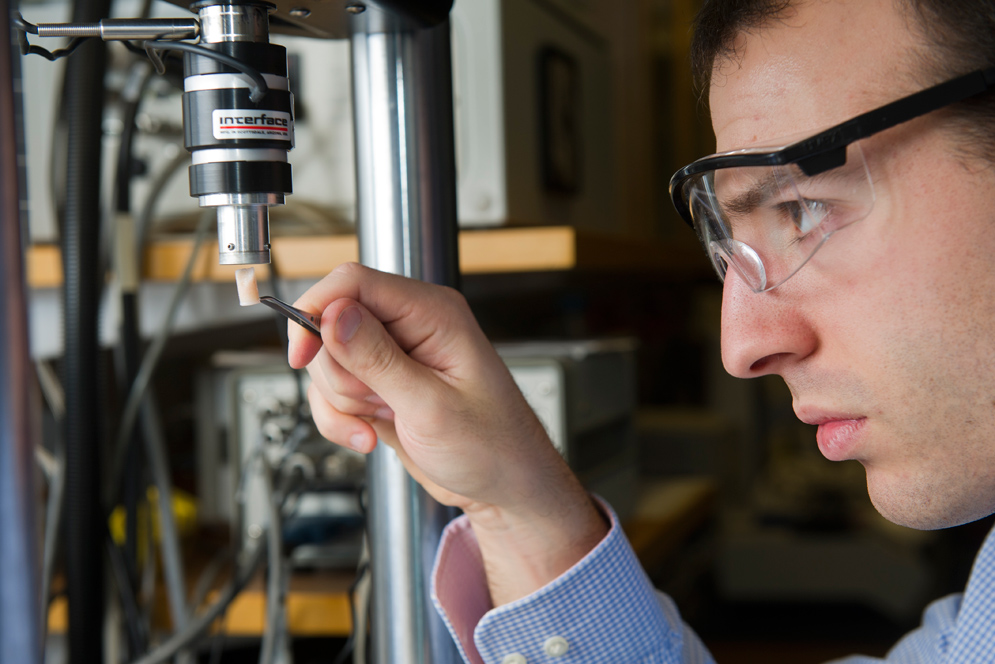 Benjy Cooper (GRS’16) inserts a bone and cartilage core to test the degree of friction and wear to its surface when submerged in natural or synthetic lubricants.

“That’s very limiting,” he says. “It would be great if we had a quantitative way to assess the stage of the disease.”

Neel Joshi believes he may have developed one. The former Grinstaff Group postdoctoral fellow, now an assistant professor of chemical and biological engineering at Harvard, created a positively charged small molecule, called CA4+, that attaches to negatively charged molecules called glycosaminoglycans, or GAGs. Under a CT scan—which combines a series of X-ray views taken from multiple angles—Joshi’s contrast agent glows to reveal the presence (or relative absence) of GAGs, which retain water and maintain cartilage’s strength and durability. A low GAG count indicates the onset of osteoarthritis.

By using Joshi’s contrast agent during CT scans of cow knee cartilage and rabbit knees, the team can quantitatively measure how thick and firm the tissue is. They believe physicians could eventually use the tool to more accurately diagnose and treat osteoarthritis in humans.

“We have a marker that can identify the biochemical and biomechanical health of the cartilage tissue,” Lakin says. He and Rachel Stewart (ENG’14), another biomedical engineering doctoral candidate, are now testing CA4+ on larger joints, including the knees of racehorses and human hips and knees. “Imaging intact, large, and live specimens is a more complex challenge for us,” Stewart says, “so we are working on optimizing it.” 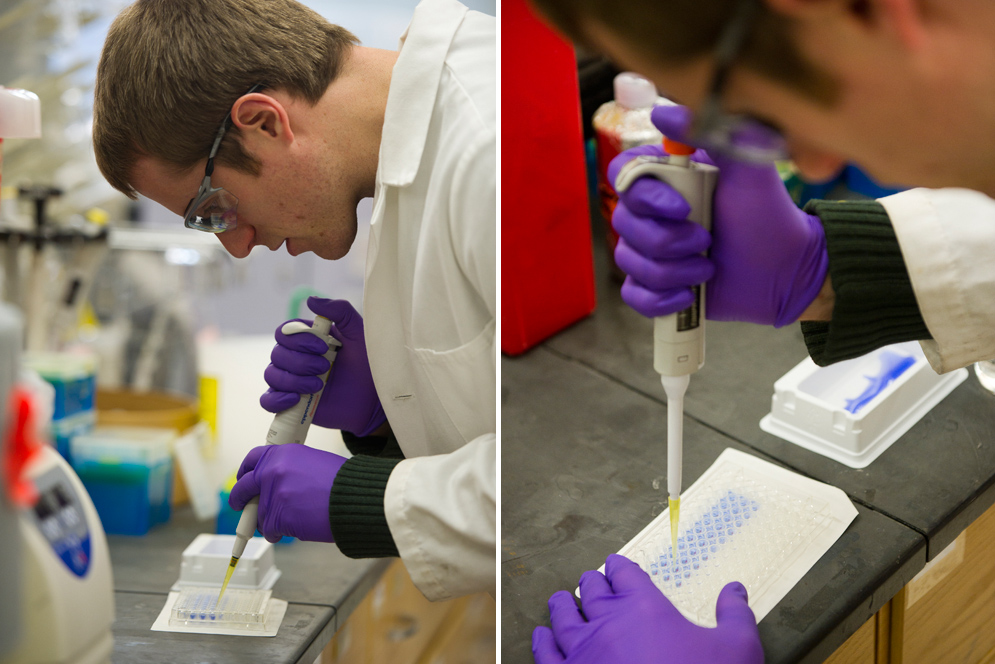 Benjamin Lakin (ENG’14) performs an assay to determine the amount of weight-bearing glycosaminoglycans, or GAGs, within the cartilage.

Lakin is also developing CA4+ for use in small animals. “There’s a lot of interest in a monitoring tool for osteoarthritis in mice,” he says. “That’s what all pharmaceutical companies use to test drugs, but they don’t have a monitoring tool to tell if their treatment is working or not.” Large groups of mice are now raised and sacrificed at various points in the disease’s progression to determine a drug’s success or failure. The team’s monitoring tool would give researchers the freedom to conduct longitudinal experiments without the expense (and moral hazard) of large-scale animal studies.

The biomarker is among the group’s “suite of contrast agents” under development, says Jonathan Freedman (MED’17,’17), that will someday include a small molecule and nanoparticle used with MRIs. While CT scans are cheaper, faster, and more commonly found in hospitals nationwide, MRIs are the preferred imaging technology of physicians for assessing soft tissues.

“The idea is ultimately to have the best early stage diagnostic that we can,” Lakin says, and to produce it within the next decade.

That could spell relief to the third of Americans 65 and older who, according to the Centers for Disease Control and Prevention, are affected by osteoarthritis and to younger patients who develop the disease following a car accident, a career in high-impact sports, or physically demanding military service—rates of diagnosis were 26 percent higher for service members age 20 to 24 than for the general population, according to a 2011 study released in the journal Arthritis & Rheumatism.

“We’re coming at this from a very academic sense,” says Freedman, a medical student and pharmacology doctoral candidate who brings a physician’s eye to the project. “All this work is trying to repair the knee to prevent the underlying cause, but most people would just be happy if their pain goes away.”

A Better Way to Find and Treat Osteoarthritis
2
share this