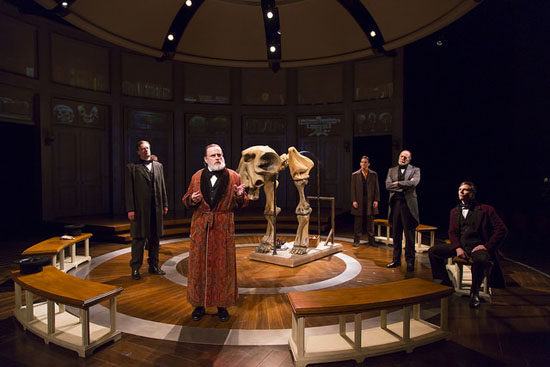 The date carries no significance for the layperson, but according to one of those in attendance, “The world changed” on October 16, 1846. On that day a group of medical workers, profiteers, and naysayers gathered in an amphitheater in Massachusetts General Hospital—since dubbed the “ether dome”—to witness the first operation performed with surgical anesthetic. After inhaling the compound ether, the patient had a tumor removed from his neck so painlessly that he was stunned after waking to learn the procedure was over. Before anesthesia, everything from tooth extractions to appendectomies was done with patients in restraints, often with nothing more soporific than whiskey. When playwright Elizabeth Egloff was commissioned to write the historical drama that became Ether Dome, she was swept up by a tale laced with greed, deceit, and a band of nefarious characters worthy of Dickens.

The current production of the Huntington Theatre Company, Ether Dome, produced in association with Alley Theatre, Hartford Stage, and La Jolla Playhouse, was directed by Michael Wilson, Hartford Stage artistic director for more than a decade. The play weaves a tangled web around Horace Wells, a Hartford dentist whose experiments to reduce his patients’ pain leads to an epic battle for recognition and remuneration, with hints of the unsavory future of the health care industry’s dance with pharmaceutical companies. Wells’ descent into insanity is believed to have been the inspiration for Robert Louis Stevenson’s classic The Strange Case of Dr. Jekyll and Mr. Hyde. The cast of 16 features Michael Bakkensen as Wells, and Huntington veterans Karen MacDonald (CFA’72) and Ken Cheeseman. The play, set in MGH, runs through November 23 at the Calderwood Pavilion at the Boston Center for the Arts.

Egloff’s play The Swan has been produced numerous times in this country and abroad. Several of her other plays have been directed by Wilson: The Devils, Wolf-Man, and The Lover. A graduate of Yale Drama School, Egloff is the recipient of numerous awards, including the Helen Merrill Award, the Lila Wallace Foundation Writers Award, the Oppenheimer Award, and the Kesselring Prize. BU Today spoke with her about the origin of Ether Dome, what the play says about the state of health care today, and why the story requires an unnerving dose of blood and gore.

BU Today: What inspired you to write this play?

Egloff: Actually the idea was director Michael Wilson’s. He got some money from the state of Connecticut to develop historical plays. He had walked past a statue of Horace Wells, in Hartford, and when he asked people about it, he got a hazy version of the story and asked me to work with him on adapting it for the stage. Originally it was supposed to be a shortish play about Wells and his crooked associate, William Morton, but as soon as I started reading up on it, it became clear that it involved many other people, other doctors who Morton had stolen from. He was a notorious con man, and I realized that the story kept getting more and more complicated.

Which character is the true center of the play?

William Morton is the engine of the play, but really the person we connect with most is Horace Wells. The play is about their relationship. There were so many story lines, we couldn’t decide what could be the string we were going to hang everything on. That’s been a battle, picking the lines that would advance the story.

Parts of the play are quite gory.

Yes. I’ve become immune to it. There are three operations in it, but you need it to be at a certain level of gore and blood so you understand how necessary it was to find a solution to the pain problem. And the difference in that first, silent operation is so dramatic.

Was Morton, who takes credit for anesthesia, a fraud?

Morton never went to medical school and he never went to dental school. The fact that he didn’t kill the patient that day at Mass General is a fluke.

Did you have to sacrifice much historic accuracy for the sake of the script?

It’s historically accurate, but there are some details that are changed, because I needed to be able to be coherent. Some details are simplified, but I really wanted it to be as accurate as possible. The battle was over who would get the credit for ether as an anesthetic, so each principal had his own version of the story, and the stories don’t jibe. I wanted things to remain ambiguous so people in the audience are left discussing what they believe really happened.

How do these events resonate in today’s world?

These events mark the turning point for modern medicine. But they also mark the first battle over ownership of drugs, and doctors versus pharmaceutical companies. It was also one of the first battles over patients’ rights. Until then, doctors were always selling various tonics. But this was such a serious drug that the idea of selling it at all was an anathema and believed to be a violation of the Hippocratic Oath by the doctors at Mass General and others. But of course Morton is doing it for the money, and he cons Mass General into thinking the anesthetic was some special new compound when it was just ether. You could call him Novartis, you can call him Pfizer. Doctors have always fought over credit, but it’s the intense commercialization of medicine that is so repellent, and this is the first time this conflict plays out.

The Huntington Theatre Company’s production of Ether Dome runs at the Calderwood Pavilion at the Boston Center for the Arts, 527 Tremont St., Boston, through Sunday, November 23, 2014. Tickets may be purchased online, by phone at 617-266-0800, or in person at the BU Theatre, 264 Huntington Ave., or the Calderwood box office. Patrons 35 and younger may purchase $25 tickets (ID required) for any production, and there is a $5 discount for seniors. Military personnel can purchase tickets for $15, and student tickets are also available for $15. Members of the BU community get $10 off (ID required). Call 617-266-0800 for more information. By public transportation, take an MBTA Green Line trolley to the Copley Square stop or the Orange Line to Back Bay. Follow the Huntington Theatre Company on Twitter at @huntington.

Birth of Anesthesia: the Play