In the video above, students demonstrate the moves they have learned in FitRec’s Aerial Dance Silks Skills class. Photos by Gina Manning

Carolyn Harper was suspended sideways six feet in the air on a recent Thursday morning, her body held in place by a draped piece of red nylon. With one leg wrapped tightly in the fabric to support her weight, she formed an arabesque by stretching her other leg out behind her at an angle.

“Are you in?” her partner, Alissa Rickborn (GRS’16), asked. Harper (SAR’15) nodded and gave the OK for Rickborn to take hold of her back leg and gracefully run around in a circle. When she let go, the effect was magical: Harper spun elegantly through the air.

The two women are among five students enrolled in Aerial Dance Silks Skills, a noncredit FitRec class that teaches dancers how to climb, swing, drop, flip, spin, and perform using aerial silk material suspended from the rafters of the FitRec gym. When done correctly, dancers give the illusion that they are flying and dancing in midair. 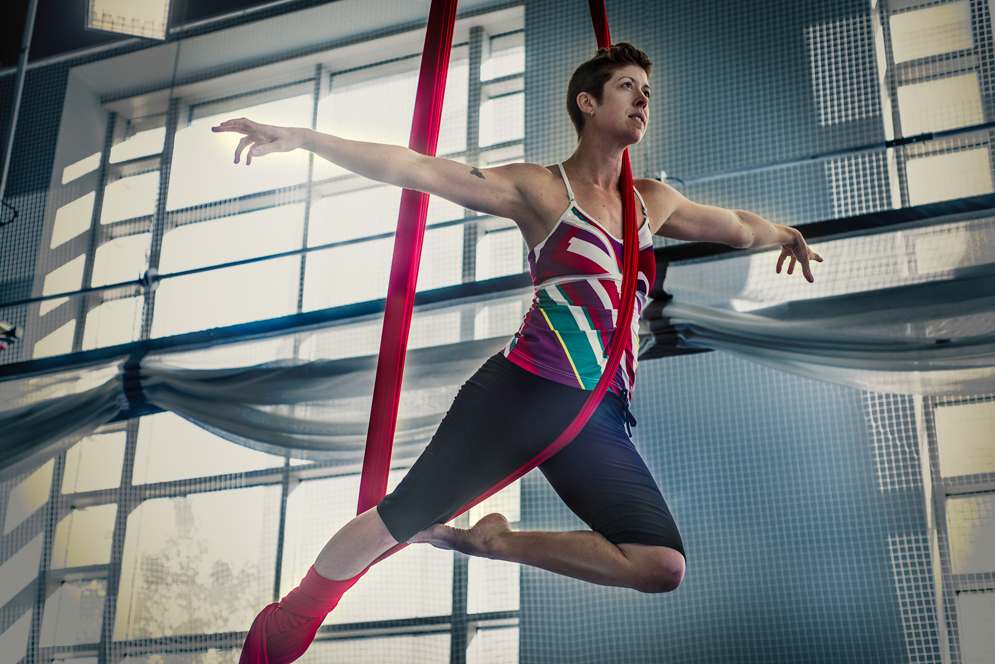 Dance student Theresa Racicot is suspended 10 feet in the air in aerial silks.

Aerial dance developed from traditional circus arts like the trapeze and corde lisse. The art form is fairly new, says class instructor Marin Orlosky-Randow, who trained in classical ballet. The aerial silk material, first developed in the 1980s, is not actually silk, she says, but more akin to an industrial-strength spandex.

Orlosky-Randow credits Cirque du Soleil with demonstrating that circus arts can be transformed into a fully choreographed show with characters and an emotional arc. In addition to silks, the aerial dancers use trapezes, aerial ropes, and aerial hoops.

“We’re in this post–Cirque du Soleil era where we’re asking, what else we can do to keep the art moving forward?” says Orlosky-Randow. “I think a lot of people are still figuring out what aerial dance is, both performers and the general public. As it’s a fairly young field, I find it exciting, because there’s still a lot of new ground to cover.”

Micki Taylor-Pinney, who has been the dance program director for Physical Education, Recreation, and Dance (PERD) since 1985, says aerial dance has quickly attracted a loyal following of students, alumni, and the general public since PERD offered the first class last year. 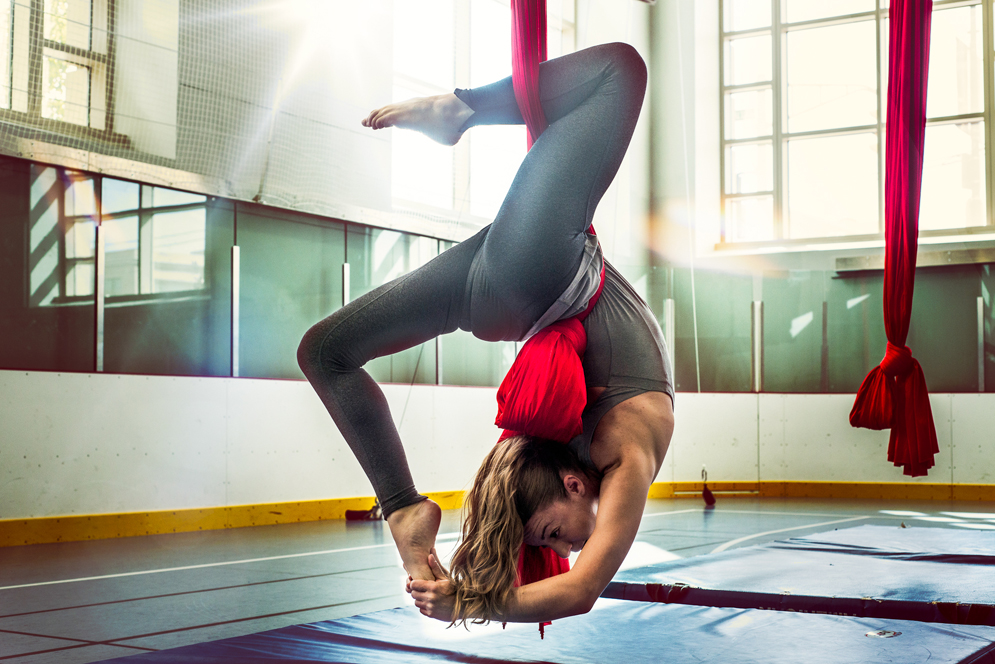 Taylor-Pinney says that students take the classes for a variety of reasons—a desire to experiment, a chance to develop choreography, the unique opportunity to master the daring skills that circus arts demand. PERD will offer a record number of seven aerial dance classes this spring, among them a silks repertory class, “with the hopes of having aerial dance in our informal spring show,” she says. Currently, there are four classes offered, covering both introductory and more advanced levels, with a few intensive workshops held throughout the year.

Many of the more complicated and graceful moves require a dancer to first perform a foot lock, a stabilizing move where one foot is “tied” to the silks in a figure eight knot. This knot gives dancers peace of mind as they dangle as much as 30 feet in the air (the large cushioned mats below offer some reassurance, too). With that skill mastered, dancers move on to more complicated climbs, inversions, and rotations.

While Rickborn acknowledges that flipping in the air can be scary, she says the class has quickly become the highlight of her week. The triathlon athlete also says it’s her best workout. “It takes a lot of abs and upper arm strength to hold yourself up there,” she says, something many people don’t realize when they first sign up for the class. “I love how aerial dance combines strength with stretching and movement. I feel like a monkey when I hang upside down and spin around.”

By offering more classes and performances, Orlosky-Randow hopes more BU students will give aerial dance a try. “I think there’s something about it that taps into the excitement people have as kids from climbing on rope swings or trees,” she says. “There’s something about swinging that feels very freeing.”

Flying through the Air with the Greatest of Ease