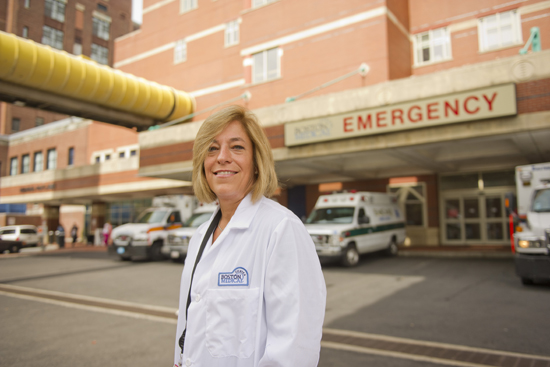 Judith Linden says that in treating sexual assault victims, “it’s most important to make sure that patients are believed, understood, and get the care they need and asked for.” Photo by Cydney Scott

Nearly a third of women are sexually assaulted at some point in their lives, but less than half will seek medical care for their injuries. For those who do, emergency care often fails to conform to established protocol.

For the past 15 years, Judith Linden has worked to improve and streamline evaluation and treatment of adult sexual assault victims seeking care at hospital emergency rooms. The School of Medicine associate professor of emergency medicine has written an overview, published in the September 1 issue of the New England Journal of Medicine, of the evolving state of that care, which increasingly involves the use of sexual assault nurse examiners (SANEs). SANEs are quick-responding, specially trained, certified professionals who perform forensic medical-legal exams. When cases go to trial, the SANEs are available to testify. The program was pioneered at Boston Medical Center and there are now 650 nationally, according to Linden. Some—for example in San Diego—are at freestanding sites.

Linden’s review study points out that especially in the absence of physical injury (about half of all cases), victims “are often frightened, emotionally traumatized, and embarrassed. They often fear that they will not be believed, and they may also fear for their safety if they know the assailant or if the assailant has access to their personal information.” And she also reports that many rape victims doubt that their cases will be prosecuted successfully, a justified fear in light of the fact that in the United States fewer than half of rape cases end in convictions. Medical providers should understand, Linden stresses, that “it is not their responsibility to determine whether a sexual assault has occurred, since such a determination can rarely be made on the basis of examination alone.”

The U.S. Department of Justice, the World Health Organization, and the American College of Emergency Physicians have issued guidelines for the treatment of patients after sexual assault. Linden underlines the importance of following consistent procedures, from evaluation of traumatic physical injuries to emotional support to evidence collection. Although every sexual assault case is different, maintaining protocol is crucial, she says, noting that cases where SANE-trained nurses gather forensic evidence end in a 92 to 95 percent prosecution rate.

BU Today spoke recently with Linden about the demands of caring for sexual assault victims, how emergency medical staff is rising to that challenge, and what improvements can be made.

BU Today: Is the medical response to adult sexual assault close to being standardized or does it vary widely?

Linden: I don’t think it’s standardized at all. The beauty of having a SANE program or response team is that it establishes protocols. There are still a lot of community hospitals that don’t follow the same protocols.

What are some of the problems hospitals face in establishing sexual assault protocols?

I think staffing is a difficult issue. These cases can take a long time; it can take up to six hours for an exam, longer to make sure victims have proper treatment and the counseling they need. The ER is very unpredictable—traumas come in, and you have to prioritize patients. Sexual assault patients’ injuries may not be life-threatening. Each hospital, unless it’s SANE-certified, comes up with its own protocol. We’ve gotten to the point where EMS will often triage to SANE sites.

Boston Medical Center has SANE examiners. What impact has the SANE program had?

That’s the million-dollar question if you want continued funding. Our SANE program funding is cut every year; last year it almost became unworkable, but it was restored in a supplemental budget. We’re hoping lawmakers will approve another supplemental budget. You want to show that these programs improve patient care and treatment, but you also want to prove that they’re cost-effective. Are they getting criminals out of the system, or are we saving the state money? Are they (the culprits) pleading out? Not that many studies have looked at this. There was one done in Massachusetts and several other states showing an increased prosecution rate. Anecdotally, in our SANE program there’s a 97 percent success rate when SANE is involved. Different districts don’t share information.

You write that it’s not the medical team’s responsibility to determine whether a sexual assault has occurred. Does that mean that every person arriving at an ER saying she or he is a sexual assault victim, regardless of degree of physical injury, gets the same response?

The response is the same for every woman or man who presents complaining of sexual assault. When practitioners perform a sexual assault exam they probably won’t be able to tell if there’s been an assault just from the exam. A practitioner isn’t asked to decide whether it did or did not happen. He or she is collecting evidence, and the whole thing gets passed on to the justice system. Sometimes people come in and say, “Can you tell me if I was assaulted? I passed out; I woke up with my clothes off.” My point is, it really doesn’t matter. When someone comes in with chest pain, it’s not alleged chest pain. You treat these people as sexual assault victims. It’s very rare that someone will go through this whole embarrassing, invasive questioning if nothing happened. One reason these cases are so scary to clinicians is they’re not familiar with them, and they’re scared of the justice system. They worry that they’ll have to testify. I try to bring it back to the care. We have to offer good medical care based on the latest protocol.

What happens first when a sexual assault victim comes to the ER? Is he or she afforded privacy? Do victims sometimes have to wait a long time for attention?

At least in our emergency department, they’re given top priority triage and get a room immediately. You don’t know if the attacker has followed them to the ED. Does this always happen? Maybe not. Best practice is they should not wait out in the waiting room. The other problem we have is, we take them back, close the door, and the practitioner will just leave them there. I don’t want that to happen either. What we can’t see, for example, is strangulation injuries. The victim may have bruising or difficulty breathing. I don’t want that person to sit in the waiting room.

After sexual assault victims are released, what kind of follow-up is there currently and what role does the hospital play in ensuring a victim’s safety once he or she leaves?

That’s where we ask for social worker colleagues. Safety planning is very complex. What we try to do, if the victim has identified the person (and most of the time they can’t identify the person), is we try to get creative, have them stay with friends or family. One of the more complex situations is if they live in a dorm—that’s where lawyers and crisis counselors are involved. Authorities can have a suspected attacker moved out of the dorm. Safety planning is not a cookie-cutter solution.

Which of your concluding recommendations is the most urgent?

First and foremost, to make sure that patients are believed, understood, and get the care they need and asked for. It’s important to treat them for STDs and possible pregnancy. In Massachusetts, it’s the law: we must offer all rape victims emergency contraception. And it’s important for them to know where to access services in the future.

How has your role evolved as clinician advocate for sexual assault victims?

I came to Boston Medical Center after my residency and never left. When I joined BMC 15 years ago it was right when the SANE program was being formed, and I loved the program because it was very nurse-driven. To me, it is incredibly important that we continue training our young doctors to offer accurate and compassionate treatment. I felt if I didn’t get myself trained as a SANE, my residents would be missing out. It’s important to train our future doctors, who may not have done a SANE exam by the time they graduate. It’s important that they go off to community hospitals with this knowledge. I keep up-to-date on all the latest protocols and treatments; I serve as a 24-hour resource to them and make sure that the medical community stays involved.

There are 4 comments on ER Care for Sexual Assault Victims