More than 300 students volunteered in this year’s BU Community Service Center Alternative Spring Breaks program. Now in its 24th year, ASB pairs students with 36 organizations around the country, rebuilding homes, assisting at animal shelters, and working at food banks, among other projects. We are bringing you first-person accounts of some of those trips, described by both students and coordinators as unforgettable. Read more.

The sickeningly sweet scent of honeysuckle and rotting garbage filled the air as we walked down the narrow path to the Christian Community Center’s guesthouse, where we were staying during our Alternative Spring Breaks trip to Puerto Rico. We had come to spend the week volunteering with a local HIV/AIDS awareness program.

Two chained pit bulls barked next door, and somewhere—always heard but never seen—roosters bickered and crowed. Driving from the airport on steep and winding roads, we had passed shabby houses, colors faded, backyards full of bottles, trash, and forgotten belongings. Locals sat on plastic chairs outside, wary of our two matching passenger vans so obviously out of place. We had arrived in Caimito, San Juan’s second largest barrio, far from the luxury resorts and beaches of the main part of the city. This was Puerto Rico.

As volunteers working at Iniciativa Comunitaria, a nonprofit that serves some of the city’s poorest citizens, we were prepared to see another side of the city. The neighborhood we were staying in offered a sneak preview of the hardships we’d see throughout the week.

Our host for the week was Reverend Juan, the pastor of Christian Community Center, a Catholic church. A youthful man in his 60s, he asked us to call him simply Juan. His magnetic energy drew us in to tales of his past and his musings on life. On Sunday, we attended mass out of respect for the hospitality the church was providing us. Women prayed loudly in Spanish, toddlers ran amok, tambourines jangled offbeat to the small congregation’s warbled hymns. We introduced ourselves to the church members in mostly broken Spanish. Regardless of whether they understood us, each hugged us at the end of mass, communicating wordless hellos and thank-yous. Welcomed so warmly by Juan and the people of Caimito, we felt there was more to Puerto Rico than met the eye. 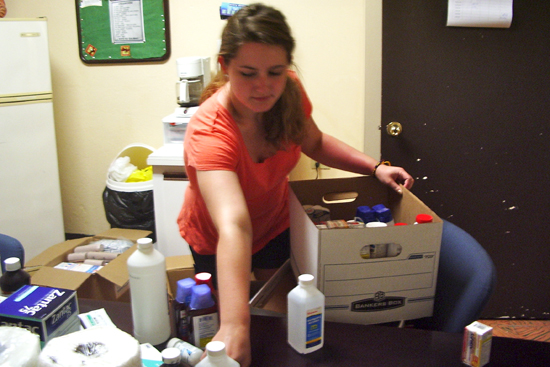 Monday marked our first day of service at Iniciativa Comunitaria, located in Hato Rey, another poor area of San Juan, about 30 minutes from the church. I spent the morning with a small group recording warehouse inventory, marveling with the others at one particular supply of tricolored condoms. At lunchtime, we reunited with Iniciativa public relations director Anyeline Céspedes, who gave us a tour of the facility.

Started in 1992 by local physician Dr. Jose Vargas Vidot, Iniciativa Comunitaria provides care to citizens excluded from basic health services. During the week, the center offers free breakfast and lunch to those who are homeless, as well as a place for them to shower and change their clothes. Another part of the complex provides a facility where sex workers can sleep during the day and receive free kits of condoms and lubricant. Regular workshops also teach women how to negotiate condom use with their clients to avoid transmission of sexually transmitted diseases, including HIV. Through the center’s Brega Bien media program, at-risk youths create their own awareness campaigns. 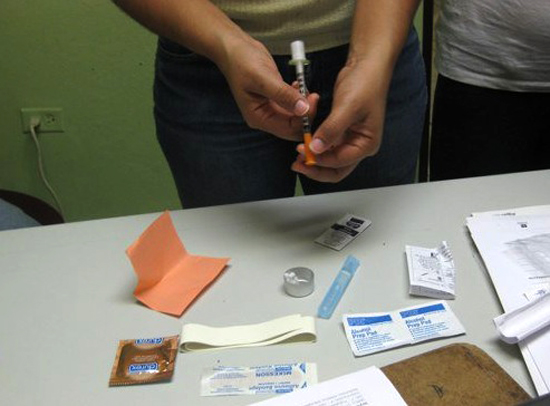 Iniciativa Comunitaria’s most controversial service is its needle exchange program, which aims to prevent the spread of HIV through needle sharing. Intravenous drug users can obtain free kits that include clean needles, alcohol swabs, a tie-off, and other drug paraphernalia from a bolted vending machine. According to Anyeline, about 800 people a day use the vending machine. Iniciativa also provides HIV testing, medical services to those with HIV or AIDS, and detox programs for drug users.

Since its establishment, Iniciativa Comunitaria has served more than 100,000 people. While we were there, we had an opportunity to meet Dr. Vidot, who continues to run the program. 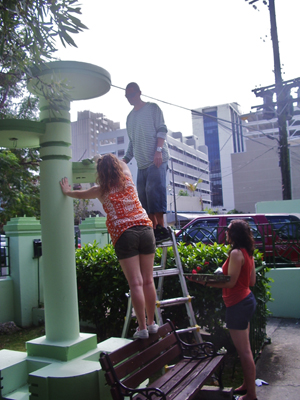 The rest of our week at Iniciativa was spent organizing donations, painting the building’s exterior, serving food, assembling condom kits, helping employees organize their offices, and making fundraiser bracelets. Our group was surprised at how closely we were able to interact with the program’s clients. One homeless woman laughed with us as we posed for corny group photos. Another client jokingly made fun of me for being a “gringa” and standing in the shade to avoid getting sunburned. Like the people of Caimito, they were welcoming us, complete strangers, into their lives, lives that involved harsh realities.

Our free time proceeded in typical spring break fashion: lounging on beaches, exploring Old San Juan, hiking in El Yunque, and kayaking the bioluminescent bay. Most nights we were invited to dinner at the homes of gracious BU alums and friends of students in our group, where we ate wonderful local cuisine. Many of them went out of their way to show us around the island. Again, more people were inviting us into their daily lives without a second thought. “You’ll visit us again?” was always the question. That we were welcome back anytime was simply implied.

On our last day of service, we were given T-shirts for our hard work that said, “El Arte de Abrazar”—The Art of Hugging—representing Iniciativa’s belief that something spiritual occurs between two people when they hug. Thinking back on all the wonderful people we had met—poor, wealthy, young, old—I realized they had one thing in common. Each person had greeted us with open arms, impressing upon us with a heartfelt embrace their kindness, their generosity, their gratitude.

Perhaps Iniciativa is on to something, I thought. Perhaps hugging really is an art form.