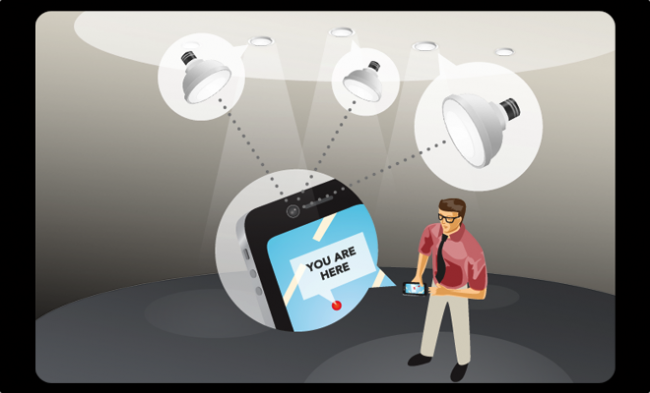 We’ve taken something that’s been around since Edison and turned it into a way of transmitting information.” -Dan Ryan, CTO of ByteLight

Dan Ryan and Aaron Ganick, both Electrical Engineers, met at Boston University as undergrads. They became quick friends as they continued to bump into each other in class and around campus. Little did they know that a common childhood passion and a local science museum would play prominent roles in shaping their futures.

At the 2011 TEDGlobal conference, Harald Haas demonstrated sending data through LED lights to project video onto a screen without an external wi-fi source. However, Dan and Aaron, recent Boston University Grads, invented a unique extension of this breakthrough–using LED lights to transmit location information to mobile devices within buildings. Even Google, which relies on wi-fi for mapping the insides of buildings, has not been terribly successful in mapping interior locations.

Enter ByteLight, Aaron’s and Dan’s small start-up based entirely around proprietary software that can accurately map the inside of buildings using only LED lighting to transmit location information. So, with the trend toward LED lighting replacing fluorescents in many buildings throughout the world and the continued growth of mobile smart devices, LED lights that broadcast location data stands to revolutionize how we interact within shopping malls, museums, trade shows, office buildings, factories, and even airports and airplanes.

ByteLight’s firmware can be licensed to LED manufacturers, who embed the ByteLight technology directly into the LED lamp as it is being manufactured. In fact, ByteLight recently licensed LED manufacturer, Solais, to produce ByteLight-enabled LED lighting for commercial and enterprise building solutions. Soon, you’ll be able to download a ByteLight app that can be used wherever ByteLight technology is used. Personally, I would love grocery stores to read my grocery list and outline the best route through the store–I’d settle for a map that pinpoints where to find the coconut milk.

For now, the best way to experience ByteLight in the wild is to visit the Museum of Science in Boston, Massachusetts, where ByteLight has been installed in the Cahners ComputerPlace exhibit. With specially equipped iPads loaded with a custom app, patrons explore the exhibit as the device camera interacts with the “smart” LEDs to display specialized content. Best of all, the museum is already switching to LED lighting, so ByteLight fits nicely into the budget. In fact, compared to other interior location based service solutions such as QR codes and wi-fi, the Museum’s Director of Information and Interactive Technology, Marc Check, thinks that ByteLight is the most economical solution. And Marc has researched options extensively. In his experience, wi-fi isn’t reliably accurate or dependable within a few feet—plus, the infrastructure is expensive and there’s often lots of latency. QR codes seem inexpensive until you compare the trade-offs. QR codes are not aesthetically pleasing, especially within art installations. Also, there’s a layer of abstraction to managing the codes, statistics, and integration with the museum’s existing content management system. Furthermore, QR codes are not interactive.

CTO, Dan Ryan, and CEO, Aaron Ganick, both credit the Museum of Science in Boston with inspiring them, as children, to pursue electrical engineering in college. And as fate would have it, the very museum that inspired Dan and Aaron’s careers just became the home of the first ByteLight installation. Aaron credits one of the most inspirational college professors he’s ever met, Dr. Thomas Little, Associate Director of the NSF Smart Lighting Engineering Research Center, with empowering, challenging, and mentoring him. A fellow entrepreneur, Dr. Little understands how to prepare researchers for technology entrepreneurship.

ByteLight is just getting started. In spite of the fact that they’ve built a solid product and partnered strategically to mass-produce and install their invention for location based services inside buildings, both Aaron and Dan dream bigger.

They won’t admit to any solid plans for future development, but as location-based services through ByteLight technology matures, expect to see integration with accessibility, safety, entertainment, and even energy conservation applications. In fact, ByteLight provides developers with an SDK so that others can dream up applications that have not even been imagined yet.

So, as science literally comes full circle for Dan, Aaron, and the Museum of Science, the next chapter is already being written. Each day, youngsters enter the Museum of Science, iPad in hand, eagerly interacting with the Cahners exhibit.  Just like the Internet, tablet, and smart devices, these kids will grow up to expect to see this technology everywhere in their lives—and it is just getting started.