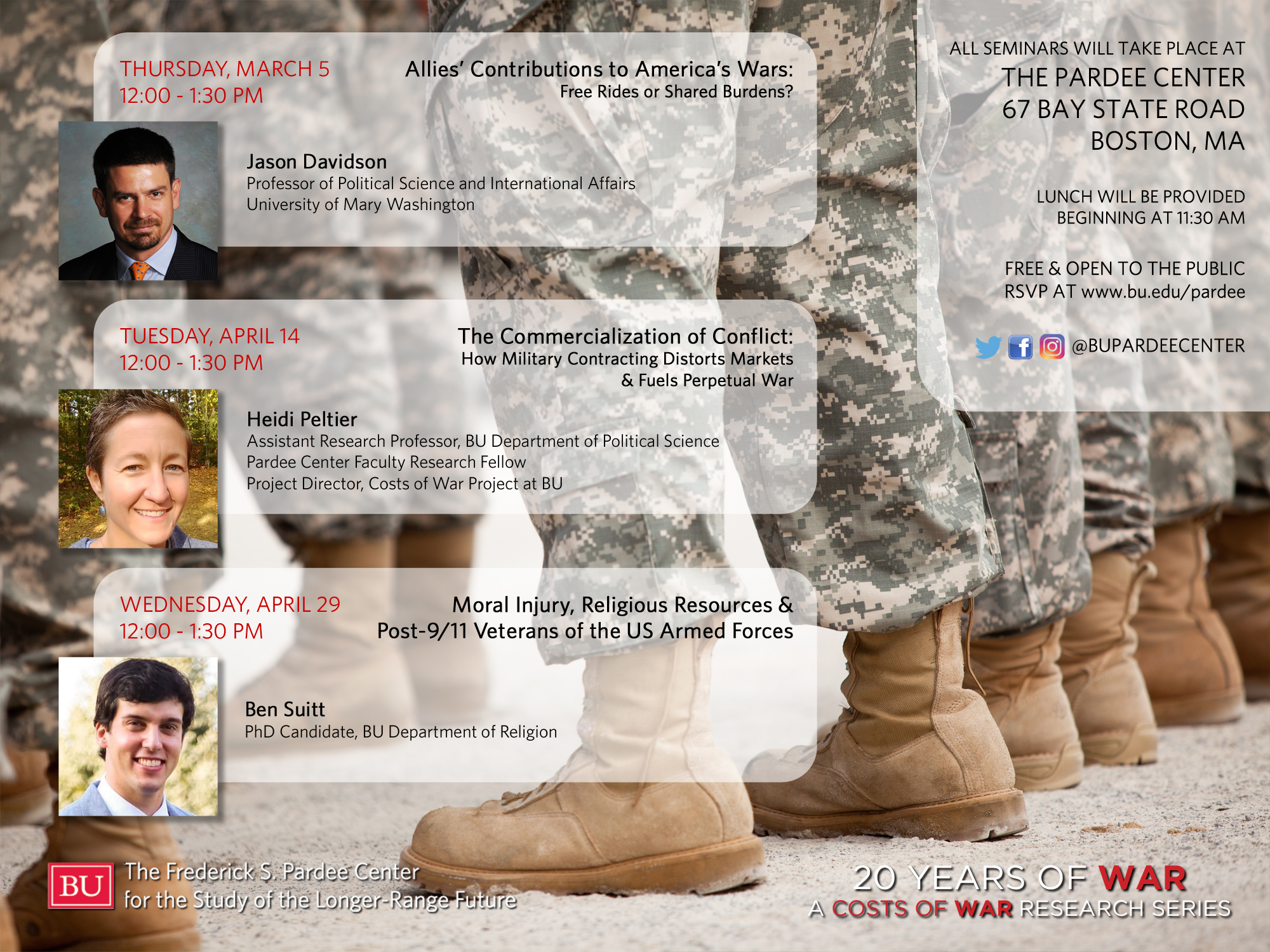 The Frederick S. Pardee Center for the Study of the Longer-Range Future invites you to attend an upcoming seminar series exploring various costs and consequences of the post-9/11 wars. The seminars are part of the “20 Years of War” research series, a two-year collaboration with the Watson Institute for International and Public Affairs at Brown University to expand the ongoing Costs of War project. The “20 Years of War” research series explores the human, financial, environmental, social, and political costs of the post-9/11 wars and illustrates how the impacts of the wars will ripple into the future.

Critics of the United States’ allies—including President Donald Trump—argue that they underspend on defense, free-riding off of the United States’ relatively large defense budget. What the critics miss is that alliance burden-sharing is about more than just defense spending. America’s allies have made significant contributions of troops and materiel to U.S.-led wars from the Persian Gulf War onward. Jason Davidson, Professor of Political Science and International Affairs at the University of Mary Washington, will provide a detailed look at the contribution major U.S. allies have made to U.S.-led military operations in the post-Cold War era, and the significant costs they have incurred. He will also discuss varying motives that lead allies to contribute, noting that allies sometimes contribute primarily because the U.S. has asked them to. Other motives include the allies’ national interest, prestige, or social norms. Finally, Prof. Davidson will discuss explanations for why allies vary in the level of contribution they make to a particular conflict.

At least half of U.S. federal spending on the wars in Iraq, Afghanistan, and other areas in the “War on Terror” has gone to private contractors. Contractors not only build weapons systems for the military, but they also provide various services in war zones, including food services, construction, housing, transportation, and security. War is lucrative for these contractors, and whereas the public has an incentive to withdraw from war and stop wasting tax dollars and human lives, private contractors who profit from war have the opposite incentive. Heidi Peltier, Assistant Research Professor in the BU Department of Political Science and a Pardee Center Faculty Research Fellow, will discuss how the commercialization of the post-9/11 wars contributes to three interrelated phenomena: (1) budgetary distortion, or militarization of the federal budget; (2) market distortion via “Say’s Law,” wherein supply creates its own demand, as the profit-motive fuels the supply of war-related goods and services and leads to lobbying for defense funding; and (3) labor market distortion, as contractors are able to hire military veterans at low cost, and both veterans and civilians can find more lucrative job opportunities working for military contractors than in other industries.

With an epidemic of moral injury among servicemembers of the U.S. Armed Forces today, there is a growing need to understand the role of religion, and other meaning-making resources, in the onset and mitigation of trauma. Different Christian practices, beliefs, and communities may help soldiers avoid experiencing moral dissonance or may help them to manage manifestations of moral injury. Alternatively, it may be the source of great tension, exacerbating dissonance or even leading to or enhancing trauma. Ben Suitt, a PhD candidate in the Department of Religion, will present the ways post-9/11 veterans who identify as Christian used religious resources to navigate the disruptive experience of a military career, paying attention to how different faith narratives, religious beliefs, and levels of religiosity affected them. Additionally, he will explain whether and to what extent they experienced conflict between their involvement in the military and those religious frameworks. The result will be an analysis of the differences between servicemembers who used religious resources to navigate the onset and manifestations of moral injury and those who found those resources enhanced their dissonance.