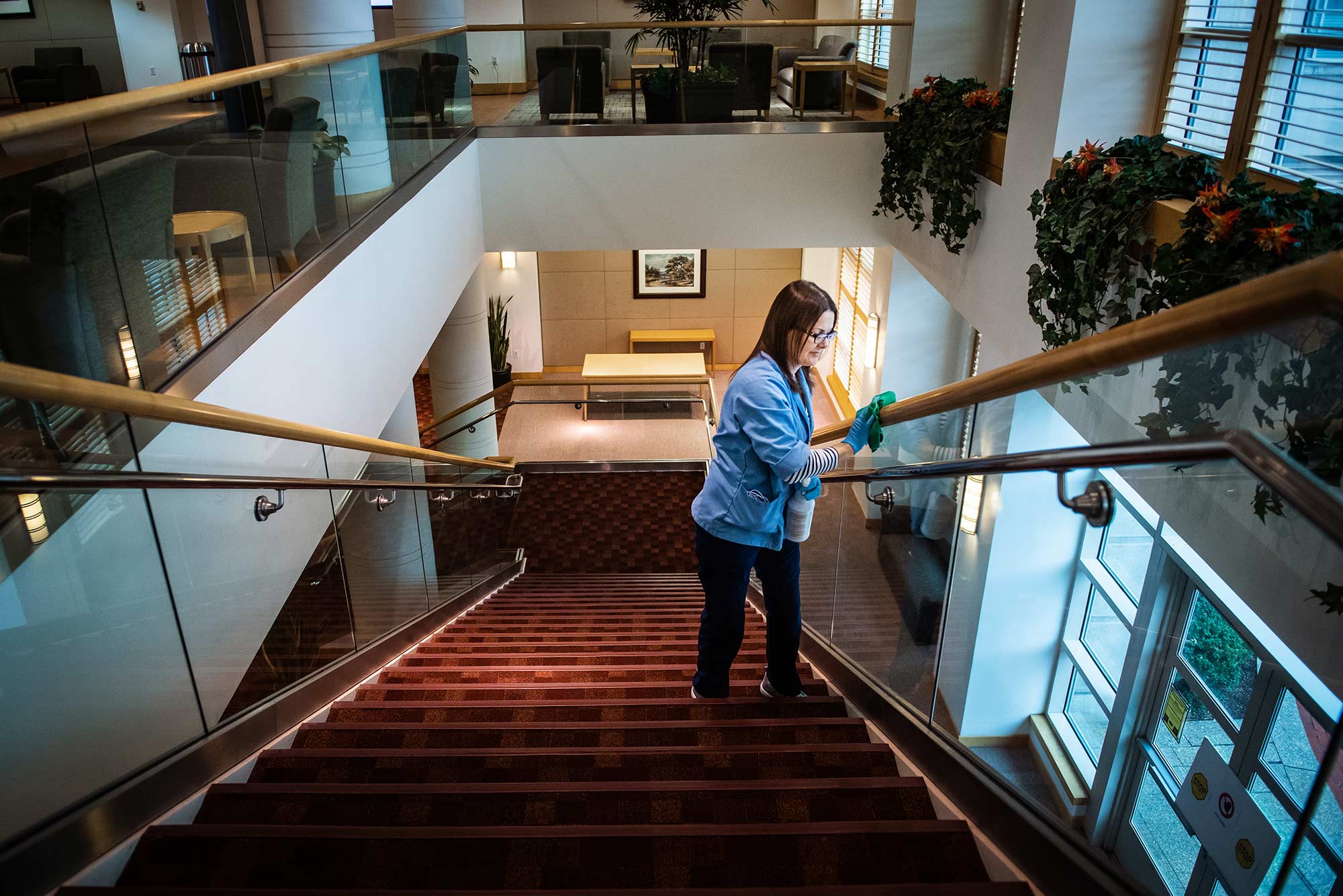 BU custodian Grace Araujo wipes down the staircase handrails at StuVi I. Photo by Jackie Ricciardi

They’re disinfecting the buildings, down to the last door handle—and you can’t do that over Zoom

The word was going out. BU faculty would be told to shut down their classrooms and learn to teach remotely. Staff deemed nonessential could work from home, too. Within days, students would be packing their dorm rooms, leaving the campus all but deserted.

But Bill Walter and his crew weren’t going anywhere.

On Thursday, March 12, Walter, assistant vice president for facilities management and operations, called an emergency meeting with Carlos Vazquez, his director of custodial operations, and the custodial staff’s 19 area managers. They gathered around a conference table at their headquarters behind Nickerson Field. Walter was on the speakerphone from home, where he was self-quarantining after a thirdhand exposure to coronavirus.

“It’s showtime,” he told his team.

The 471 men and women on his custodial crew wouldn’t have the luxury of working from home. You can’t disinfect a toilet bowl or take out the trash on Zoom. They had to clean and maintain BU’s 300 buildings, where many students were still in residence, and where many faculty and staff were still working.

Walter, who is in his 40th year at BU, reminded his team that they had worked through many flu seasons—and “snowmageddon,” in 2015, when they’d shoveled out the campus day after day, sleeping on couches in dorm hallways because the storms shut down highways.

But this was something new—the pandemic of a deadly virus that can linger on surfaces for hours or possibly days, making deep cleaning all the more important, but also potentially risky. Area manager Ken Parlee remembers the message that came over the speakerphone: “Mr. Walter said this was going to be our biggest challenge ever.”

The custodial team—and the tradespeople, plumbers, carpenters, and electricians, the entire Facilities Management & Operations crew—prides itself on always being ready. They’re constantly planning ahead, for Move-In day, for intersession, for Move-Out day, and for Commencement.

“If you want to have supplies,” Tom Daley, associate vice president for facilities management and operations, says, “you have to think ahead.”

By the end of January, Vazquez was tracking the worsening news from China. If the average person in Boston, or elsewhere in the United States, wasn’t yet overly concerned about the virus, Vazquez, who had emigrated from Costa Rica and worked his way up from maintenance worker, felt otherwise. He told Walter BU should start preparing. They needed to make sure they had plenty of top-grade sanitizing gear and other essential cleaning supplies on hand. Walter had learned a couple of decades ago to trust Vazquez’s judgment and gave him the go-ahead.

“As we watched this thing coming,” he says, “we racheted it up week by week.”

By the time Walter was mobilizing his area managers over the speakerphone in mid-March, Vazquez had stocked the warehouse, a squat white and blue building at 120 Ashford Street, with box loads of the hospital-grade disinfectant Oxivir TB, hand sanitizer, soap, and roll upon roll of paper towels and toilet paper. “I try to be prepared for anything,” Vazquez says. “My goal is as long as we don’t have any sick students, I can say I did my job.”

Over the years, Vazquez has cultivated relationships with key suppliers, like Simplex Janitorial Supplies, which serves campuses across New England. “Carlos is tough,” says Alan Brown, who founded Simplex with his brother 40 years ago. “Carlos gets what BU needs.”

“We couldn’t believe it,” Brown says. “It sprays a mist that covers everything, it adheres to every surface, it clings like it’s a dust magnet.” Vazquez took the prototype back to BU and began using it.

Now, in the midst of the pandemic, the CEOs of major airlines are showing off their green guns. Having acquired half a dozen of them toward the end of 2019, Vazquez bought another 20 green guns, at $400 apiece, and distributed them among the area managers weeks ago. You can’t find a green gun to buy anywhere now, according to Brown.

“This is the job”

Inside the high-rise StuVi I dorm at 10 Buick Street, Area one manager Mario Moura is watching as Joe Botelho, a member of his custodial staff, uses one of the green guns to spray the elevators, door handles, railings, and couches in the lobby lounge with Oxivir TB. “We spray the elevator buttons seven, eight times a day,”  Moura says.

But not all their weapons are high-tech. Those last few drops of Purell you wish you could get out of the bottle? Lead storekeeper Fernando Braga figured out how to drain them into a new plastic sealed container, rigging up a hose and valve so he could refill empty pump dispensers and spray bottles with Purell. “This greatly increases the availability of Purell on campus,” says Walter.

While Botelho is firing the green gun in the dorm lobby, coworkers Evette Galvao and Grace Araujo are wiping down surfaces and cracking jokes about the green gun.

“I have bills to pay,” says Galvao. And “I love to clean,” she says. “When I finish here, I go to my other job. I clean an elementary school.”

They all wear disposable gloves. “We change gloves several times a day,” says Araujo. “Some people put sanitizer on top of their gloves.”

“We wash our hands all the time,” Moura says.

And yet the job has risks, especially now.

BU has strict safety protocols in place to protect its workers, Daley says, and if there is a known case of COVID-19, an outside biohazard team is called in to perform a thorough decontamination. A list of such spaces gets distributed to the managers so they can avoid accidentally sending workers into harm’s way.

“Let’s face it, this is what we signed up for,” says Parlee, as he walks through the nearly empty three-story dining hall at the Yawkey Center for Student Services at 100 Bay State Road, where he and his crew had stacked the hundreds of tables and chairs to reinforce social distancing. “This is the job. The students come first.”

On a shelf above the desk in his small basement office are rows of handwritten thank-you cards from previous years’ graduating seniors; many of them had work-study jobs in BU’s Educational Resource Center.

“Dear Papa Ken,” one note reads. “I’m going to miss you so much…You have made all of my days at the ERC brighter and I can never thank you enough for your support and friendship. Also, you’re so good at your job and you always inspire me as a manager.”

Ties on the custodial crew run deep. When Parlee’s father died, in February, Walter came by to offer condolences. Team members show up for one another’s family weddings and funerals. No one quits. These are coveted jobs. The benefits are generous.

“You’re proud of what you do,” says 30-year BU lead custodial worker Riley Whitehead, who is part of Parlee’s crews.

Joe Perriello, area manager for the FitRec Center and Agganis Arena, home of BU’s ice hockey team, has three daughters, Rose (Wheelock’14), May (CAS’16), and Sophia (CAS’19), who have graduated from BU with help from the University’s tuition remission benefit for faculty and staff. A fourth, Anna (CAS’22), is now learning remotely at home.

It’s Tuesday, March 17. Perriello is sitting in the stands at Agganis. On the ice rink below, one of his crew is riding a Zamboni in circles, the machine methodically scraping away the ice.

FitRec is closed, but the work there remains, and in buildings across campus. “We shampooed the carpets [at FitRec] last night,” says Perriello, who is still catching the daily 5:30 am train from Weymouth to Boston.

Things keep changing for these workers, just as they do for the rest of us. On March 17, BU President Robert A. Brown announced that all students, with exceptions only for emergency circumstances, would have to leave campus. The custodial crew was there to help the last students move out. Wielding the green guns, they disinfected hundreds of carts before the students used them. And when the carts were returned, they sprayed them down again. “They were spraying the heck out of the carts,” says Walter. His self-quarantine was over by then and he’d driven in from Northborough to help out over the weekend, stopping at Harbor Freight Tools to pick up 12 more disinfectant sprayers.

Still ahead for the custodial workers is a deep cleaning of all the dorm rooms.

On March 26, Brown announced that Commencement would be postponed until late summer or fall. The custodial crew will be ready.

Meanwhile, they’re carrying on with one ritual of the annual May Commencement. “We’ll still be planting flowers,” Walter says. “I think that’s important.”

There are 43 comments on Spraying, Wiping, and Cleaning, BU Custodial Workers Never Stop, Even in a Pandemic

Spraying, Wiping, and Cleaning, BU Custodial Workers Never Stop, Even in a Pandemic
43
share this