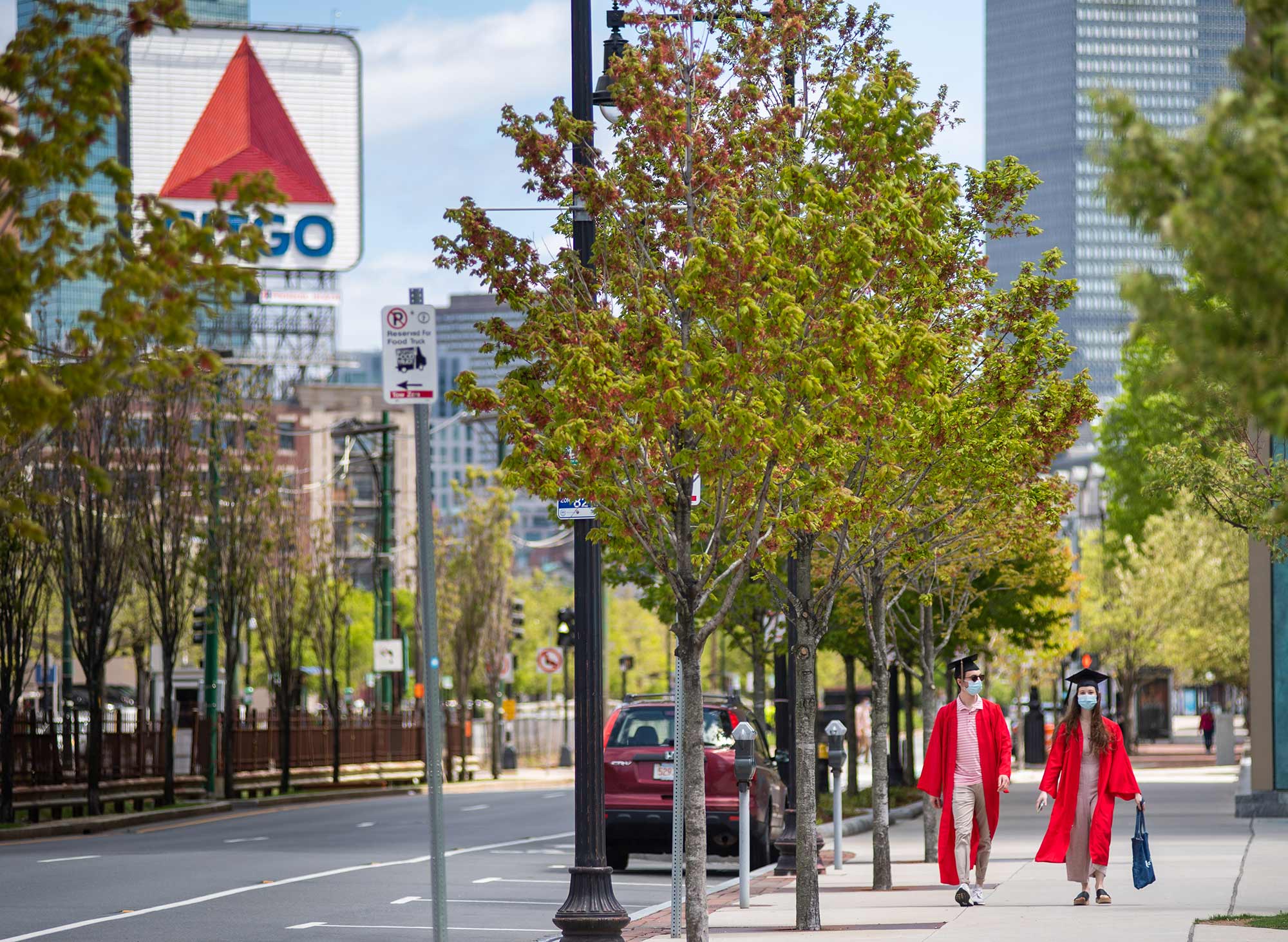 To mark the end of their college careers, Joe Besser (Questrom’20) and Michelle Goltsman (COM’20) take a walk around campus on May 17, the original date scheduled for BU’s 2020 Commencement. Photo by Cydney Scott

Also in our Weekly Coronavirus Roundup: deadline for students to file CARES funding application is Saturday

If you have a question or comment related to BU and its response to the COVID-19 crisis, on the subject of the move-out, remote learning, retrieving personal belongings, or anything else, please visit Boston University’s special COVID-19 website. Questions are being answered there by specific departments in a timely fashion. Thank you.
—Doug Most, executive editor, BU Today

Quote of the week:

Put it on. That’s all you can say. Don’t resist it. Don’t let your ego get the best of you.

Stat of the week:

Volunteers calling admitted students, wherever they are

While 2020 BU grads are still winding down from their socially distanced celebrations last weekend, a small army of BU faculty and staff volunteers are calling every one of next year’s admitted students this week to welcome them to the University. But it sounds like the volunteers are getting as much out of it as the students.

“My first call, I spoke to a kid from the DC area, a great kid with great energy who was fired up to talk to someone from BU. It was awesome,” says Joe Jones, men’s basketball head coach. “He was blown away that we would take the time to call. He’s a basketball fan, so we had a nice talk about that.”

Each of the 304 volunteers had a list of about 20 randomly chosen students to call under the plan by Enrollment & Student Administration and the Dean of Students office.

The student Jones spoke to “was really excited about the opportunity to go to BU,” he says. “He really felt like it is a place that he could call home. He felt like people here really care about each other and that this call was an example of why he chose BU.”

The goal was to talk to all 3,000-plus students in the Class of 2024, says Dan Solworth (CAS’06), Dean of Students chief of staff and director of operations. “We wanted to really put some effort and time into reaching out, talking to, and connecting with our incoming class.”

The volunteers started making calls on Monday, and by Wednesday they’d reached about half the admitted students. Agenda items included summer Orientation and how that will look in the COVID-19 era, as well as how the University is gearing up for fall. They hope to finish today, Friday, May 21.

Solworth’s own list comprised 23 students in China. “I was up in my living room in the middle of the night last night making my calls so I could adjust to their time zone. I had one student in Hong Kong, and I asked if he had any questions and he said, ‘Yes. When can I move there? I’ve got to get out of my mother’s house!’

“So there’s been some real positivity and moments of levity happening in these conversations. It’s a moment for us to show these students that we really care about them and we’re thinking about them now,” Solworth says.

Also among the volunteers was Kelly Nee, chief of the BU Police Department, who tackled a list of international students from Taiwan, Switzerland, and the United Kingdom. She says the conversations offered a nice contrast to the prevailing pandemic atmosphere in Boston. Talking to them “felt great, honestly. It’s so surreal here.”

The students she spoke with were all excited about coming to Boston and committed to BU. But the first one she contacted, a College of General Studies student from Taiwan, was apprehensive at first.

“I said ‘I’m Kelly Nee and I’m calling from BU,’ and he’s like, ‘Hi.’ And I said, ‘I’m the chief of police,’ and he was dead silent,” she says. “And I’m like, ‘Hello? You still there?’ Then I said, ‘I’m calling to welcome you,’ and as I got excited and positive, he flipped the switch and became likewise. He was really excited to hear from someone from BU.”

The most common question among the students on her list was what the campus would look like when they arrived. “I told them, ‘I think you’ll be wearing masks and you’ll be social distancing, as everyone will be, but we’ll get through it together,’” she says.

“I’ve been here three years, and the interactions with students are the best,” Nee says. “It’s been exciting for me to connect with them and hear how positive and optimistic they are, even in these gray days we are living through. It made me feel more positive. It’s fun to be a part of it.”

Saturday, May 23, at noon is the deadline for students to apply online for emergency funding under the federal CARES Act to offset unexpected financial problems caused by the campus shutdown and COVID-19 emergency.

The University received about $15 million through the Higher Education Emergency Relief Fund, part of the stimulus package formally known as the Coronavirus Aid, Relief, and Economic Security Act (CARES). While BU could have used up to half of the money to offset its own expenses, it has dedicated all of it to help students.

Eligible students must have incurred expenses related to the disruption of campus operations in March and the move to remote learning for the second half of the semester. Examples of eligible expenses include travel, computers, data plans, housing, meals, and other educational supplies.

To date BU has received 6,705 applications and notified 4,350 students that they had been awarded a total of $11.4 million. Some 37 percent of awarded students were Pell Grant recipients. BU is continuing to evaluate applications for the remaining funds, so if you haven’t heard about yours yet, sit tight.

A theatrical success via Zoom

Boston Theater Marathon XXII: Special Zoom Edition, which featured 10-minute plays written by New England playwrights and presented by New England theater companies, raised $56,000 for the Theatre Community Benevolent Fund over six weeks, beginning in early April. Presented by BU-based Boston Playwrights’ Theatre (BPT), the daily noontime events drew about 7,500 viewers, many of them locals who look forward to the annual event, but the marathon also attracted theater fans from Texas, California, India, and Denmark. The average was 160 viewers per performance, just shy of the combined capacity—176—of both BPT theaters. Numerous  BU playwrights and alums were involved, and the College of Fine Arts School of Theatre sponsored Ships in the Night, written by Kayce (Katherine) Kvacek (CFA’20).

Stepping on the seal, in pixels

Keyu Xu (COM’20), a newly minted alum from Zhejiang province, China, who is currently living in Boston, created a Commencement ceremony for herself in the video game Animal Crossing: New Horizon, and you can watch it here. It’s become pretty popular in the BU community on the Chinese social media site Weibo, and we thought you might enjoy seeing it.

Boston and Beyond News

More from the CARES Act: Unemployment

The Baker-Polito Administration announced today that Massachusetts residents who are eligible for the federal CARES Act and qualify by having exhausted their regular unemployment compensation may now receive the new Pandemic Emergency Unemployment Compensation (PEUC). PEUC provides up to 13 additional weeks of benefits to individuals who have exhausted regular unemployment compensation and who meet the other eligibility requirements of the CARES Act. If an individual’s standard unemployment claim has expired, they must file a new standard claim. Residents should apply through the standard unemployment benefits portal, available here. Those receiving PEUC will also receive $600 weekly through the week ending July 25.

The US Department of Health and Human Services will provide as much as $1.2 billion to drug manufacturer AstraZeneca to develop a potential coronavirus vaccine from the Jenner Institute at the University of Oxford, in England. The laboratory has already scheduled tests of its new coronavirus vaccine in more than 6,000 people by the end of June.

China has proposed new security laws for Hong Kong, bypassing the local government and taking aim at the protests that have roiled the semiautonomous city, the New York Times reports. China’s leader, Xi Jinping, has moved to use the COVID-19 pandemic to rally the Communist Party in time for the National People’s Congress, the annual legislative meeting that opens on Friday. The Hong Kong laws are expected to be voted on there.

Find BU Today’s latest coverage of the pandemic here. The University’s hotline for faculty, staff, students, and visiting scholars to call for referral of their virus-related medical concerns is 617-358-4990.