Dominique Badji (CGS’13) headed in his third goal of the season October 15, giving the men’s soccer team a 1-0 overtime victory over Stony Brook. Photos by Steve McLaughlin and Cydney Scott

It is almost impossible to miss Dominique Badji on the soccer field. At six feet, the freshman forward is one of the tallest players on the Boston University men’s soccer team. The long and lanky Badji seems all legs and arms as he races around the field.

But it’s more than Badji’s long limbs that set him apart from his teammates. Most Terriers have spent years playing in structured youth and school programs and tournaments, but Badji (CGS’13) had none of that: growing up, he lived in three African countries where developmental soccer was unheard of.

Born in Dakar, Senegal, Badji and his family lived in poverty and political instability. His father was a translator who worked as the liaison with the village’s Peace Corps volunteers, befriending several of them. One of the volunteers, Janis Timberlake, offered to help the family relocate to Tanzania when she moved there, so Badji, his father, and his younger brother, Charles, went to Tanzania. Timberlake became Badji’s legal guardian. The family later followed her to Zimbabwe when she accepted a position at the U.S. Embassy there.

The one constant throughout his childhood, Badji says, was soccer. “From an early age, I loved soccer. I loved how fast-paced the game was, the chance to play with neighborhood boys. Wherever I lived in Africa, I just played with friends. There wasn’t much grass, so we played on sand. If we wanted something firmer, we played on a road.”

The 19-year-old recalls those early pickup games fondly. “My friends and I would form teams,” he says, “and then we would all throw in some money to entice one of us to step out of the game and serve as a ref. They’d do the best they could, but no one wanted to be a referee.”

Reluctant refereeing did not make for the best behaved games. “Some of our games would end in arguments. We would just walk away because we didn’t like the calls,” Badji says with a laugh. “We would give the friend reffing a hard time.” 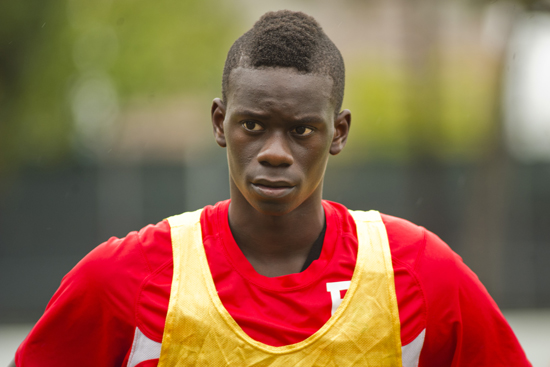 When Badji was 16, Coly returned to the United States to take a job with the State Department, in Washington, D.C. Anxious for better academic opportunities, Badji decided to go with her, leaving his father and brother in Zimbabwe. He enrolled in Episcopal High School, a boarding school in Alexandria, Va. Virtually everything he encountered there was strange and new—including the way soccer was played.

“The biggest thing I noticed was that no one here looks at each other,” says Badji. “In Africa, we said hi to everyone walking down the street. We stopped and talked. We at least smiled. When I came to the States, there was none of that. People don’t look at you when you’re walking right next to them. That struck me right away. It was a hard thing to adjust to.”

“They were very organized, and emphasized following the rules. They were very strict about them,” recalls Badji. “There were rules I was not used to, rules I’d never even heard of.”

What the teenager lacked in knowledge he compensated for in raw talent. He quickly demonstrated his agility on the field, an ability to harness his size and speed to get past opponents, affording him more chances at the net.

Badji also played basketball and ran track and field during his two years at Episcopal, but education, he says, took precedence over athletics. “When I came over here, my father told me that academics had to come first,” he says. “So while I played sports, they weren’t my focus. I was thinking about finding the best college academically. I did not think I would play sports in college.” 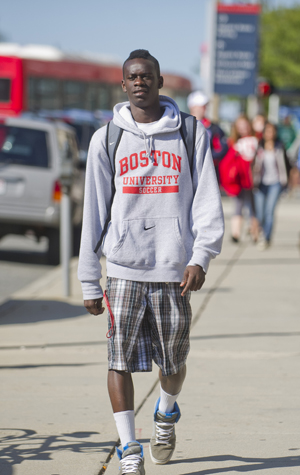 But Badji’s prowess on the field had already caught the notice of college soccer scouts and coaches, including BU head coach Neil Roberts. In recruiting him, Roberts stressed both the University’s excellent academic curriculum and its strong soccer program. The deal was clinched after Badji met his Terrier teammates during a visit to campus last spring. “They were so welcoming that I thought this was the best place to be,” he says. “Boston University provided me a high level of academics alongside the chance to continue playing soccer. I knew I wouldn’t have to compromise my academic career.”

Badji intends to transfer to the School of Management after he completes his coursework at the College of General Studies. He hopes to parlay his opportunities at BU into reaching what he says are his two primary goals: “I want a career in management. But I also want to try for a professional soccer career. And here, I can pursue both.”

Just weeks into his rookie season as a Terrier, Badji has already proven himself. He ranks second on the team in points (8), shots (28), and goals (3) and is the team’s leading freshman in all offensive categories. In a crucial league match on October 15, he scored a header goal with just 1:15 left in overtime to wrest a 1-0 victory over Stony Brook.

Unforeseen circumstances have put him in the team’s starting lineup more often than Roberts had planned.

“Due to injuries to some of our upperclassmen, we have had to play our freshmen sooner,” says Roberts. “I would rather have eased them into the game. But we had to start Dom, and he’s learned via trial by fire, and done well.”

The Terriers are 7-6-0 so far this season, 3-1-0 in America East play. The team is currently ranked second in the conference and has won four nonleague games, among them a win over nationally ranked Providence College on October 4.

Despite the nearly 8,000 miles separating them, Badji keeps in weekly contact by email with his father, now a French teacher in Zimbabwe. “I tell him about my classes and soccer. He gives me advice about academics, but he stays away from soccer,” Badji says.

The BU men’s soccer team takes on crosstown rival Boston College tonight, Tuesday, October 18, at 7 p.m. on Nickerson Field. Tickets are free for students with a sports pass, $2 for faculty, staff, and students without a sports pass and $5 for the general public. Tickets can be purchased at the gate the day of the game. More information is available here.

Kat Hasenauer Cornetta can be reached at katcorn@bu.edu.