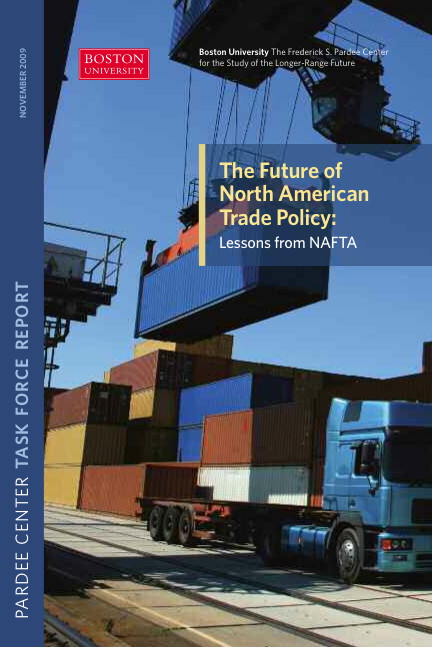 The Future of North American Trade Policy: Lessons from NAFTA

Boston University’s Frederick S. Pardee Center for the Study of the Longer-Range Future convened the task force of experts (listed below) from the United States, Canada and Mexico who authored the report, The Future of North American Trade Policy: Lessons from NAFTA.

The task force was convened by BU professor and Pardee faculty fellow Kevin P. Gallagher, along with Timothy A. Wise of the Global Development and Environment Institute at Tufts University, and Enrique Dussel Peters at the National Autonomous University of Mexico.

The report is intended to contribute to the discussion and decisions stemming from ongoing reviews of proposed reforms to NAFTA as well as to help shape future trade agreements. It offers detailed proposals on topics including services, manufacturing, agriculture, investment, intellectual property, labor, environment, and migration.

Fifteen years after NAFTA was enacted, there is widespread agreement that the trade treaty among the United States, Canada and Mexico has fallen short of its stated goals. While proponents credit the agreement with stimulating the flow of goods, services, and investment among the North American countries, critics in all three countries argue that this has not brought improvements in the standards of living of most people. Rather than triggering a convergence across the three nations, NAFTA has accentuated the economic and regulatory asymmetries that had existed among the three countries.

In 2008, candidate Barack Obama stated, “I voted against CAFTA, never supported NAFTA, and will not support NAFTA-style trade agreements in the future.” President Barack Obama has yet to demand renegotiation of NAFTA, but he has reiterated the need to rethink NAFTA and to change the template for U.S. trade agreements. Now in the wake of the financial crisis nations across the globe are re-thinking trade policy as well.

The Task Force recommendations detailed in the report include:

The Pardee Center Task Force on North American Trade Policy convened at Boston University in March 2009 and included participants from Canada, Mexico and the United States who work in various disciplines, contributing many perspectives and a range of policy options for the longer-range future of trade in North America.

The Task Force Members, each of whom contributed a chapter to the report, include: