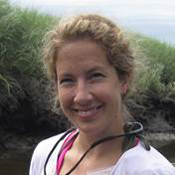 Wally Fulweiler is a biogeochemist and ecosystem ecologist broadly interested in how humans alter coastal environments. She earned my Ph.D. from the Graduate School of Oceanography at the University of Rhode Island in 2007 and conducted postdoc at Louisiana State University before joining Boston University in 2008. She was awarded a Sloan Fellowship in 2012, the first time this award was given in Ocean Sciences. In 2014, she was awarded the Cronin award from the Coastal Estuarine Research Federation. She received tenure in April 2014 and became the Director of the BU Marine Program in in 2016.

Her research group is focused on answering fundamental questions about energy flow and biogeochemical cycling of nutrients (nitrogen, phosphorus, and silica), carbon, and oxygen across the land-ocean continuum. She is particularly interested in how anthropogenic changes effect the ecology and elemental cycling of ecosystems on a variety of scales (i.e. local: nutrient loading; regional/global: climate change). Current research is centered on the transformations and the ultimate fate of nitrogen in the marine environment, the impact of climate change on benthic-pelagic coupling, silicon cycling in forests, salt marshes, and urban systems, and the environmental controls on greenhouse gas emissions in coastal systems.