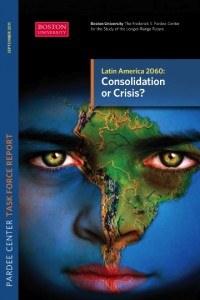 This report is the outcome of the Pardee Center Task Force on Latin America 2060 convened in November 2010 by Pardee Center Faculty Fellows David Scott Palmer, Professor of International Relations and Political Science and Director of Latin America Studies, and Carlos Blanco, Visiting Professor of International Relations, at Boston University. Task Force members (listed below) include leading scholars and practitioners from Latin America and the U.S. At the meeting, the members discussed the many advances made by Latin America in recent years and considered both the opportunities and the challenges the region faces over the next five decades.

Most of the participants, drawing on their areas of expertise as well as the exchanges in the meeting, finalized their analyses and projections resulting in the original articles appearing in this volume. The report covers five key areas that are most likely to set the parameters of the region’s future, including: 1) Economic growth and development; 2) Governance, democracy, and the state; 3) Environmental sustainability; 4) Role of outside actors; 5) Socio-cultural capacity. The concluding chapter offers policy recommendations drawn from the individual analyses to suggest concrete steps that could be taken to deal with the issues discussed. This publication is intended to contribute to the debate concerning the future of Latin America among the many communities who have a stake in the outcome of the complex dynamics now unfolding, from political and economic leaders to scholars and civil society.

Video from the Task Force on Latin America 2060 symposium is available on the multimedia section of our website. The video is divided by session: