By Peter A. O’Connor 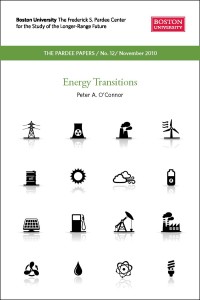 This paper examines the history of energy transitions in developed countries, primarily the United States, to identify lessons for future energy transitions that are likely to occur or are occurring in developing countries. Its focus is not on high-level policy decisions or actions of major stakeholders, but on the provision of energy services to the population, such as heating, cooling, lighting, mechanical power, and information. Factors that led to the replacement of one fuel by another, or one energy converter by another, are discussed, as are the overall market conditions that lend themselves to energy transitions. The paper also explores instances in which promising new technologies did not spark an energy transition, or in which a resource that appeared to be on its way out found new life.

Peter A. O’Connor is a doctoral candidate in the Geography and Environment Department at Boston University, specializing in energy and environmental issues. He previously worked for the Virginia-based Global Environment & Technology Foundation and was a Pardee Graduate Summer Fellow in 2009. He holds a bachelor’s degree in physics from Harvard University and a master’s from Stanford University in petroleum engineering. He wrote this paper as part of the Energy Transitions and Society project, which is supported by the Mellon Foundation.