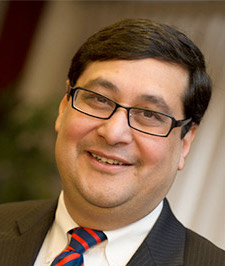 Dr. Adil Najam (عادل نجم) is the inaugural Dean of the Frederick S. Pardee School of Global Studies at Boston University which was founded in 2014 with a generous gift from BU alum Frederick S. Pardee. He is also a Professor of International Relations and of Earth and Environment. Earlier, Prof. Adil Najam served as Vice Chancellor of the Lahore University of Management Sciences (LUMS) in Lahore, Pakistan and as the Director of the Boston University Pardee Center for the Study of the Longer-Range Future. In addition to Boston University, Prof. Najam has taught at MIT and at the Fletcher School of Law and Diplomacy, Tufts University. His research focuses on issues of global public policy, especially those related to global climate change, South Asia, Muslim countries, environment and development, and human development.

Professor Najam was a co-author for the Third and Fourth Assessments of the Intergovernmental Panel on Climate Change (IPCC); work for which the scientific panel was awarded the 2007 Nobel Peace Prize for advancing the public understanding of climate change science. In 2008 he was invited by the United Nations Secretary-General to serve on the UN Committee on Development (CDP). He was a member of the President of Pakistan’s Special Task Force on Human Development (2001) and served on Pakistan’s Presidential Commission on Higher Education (2002). In 2010 he was awarded the Sitara-i-Imtiaz (Star of Excellence), one of Pakistan’s highest civil awards by the President of Pakistan. In 2019 he was appointed to the Prime Minister of Pakistan’s Advisory Council on Foreign Affairs.

Dr. Najam has written over 100 scholarly papers and book chapters and numerous awards.