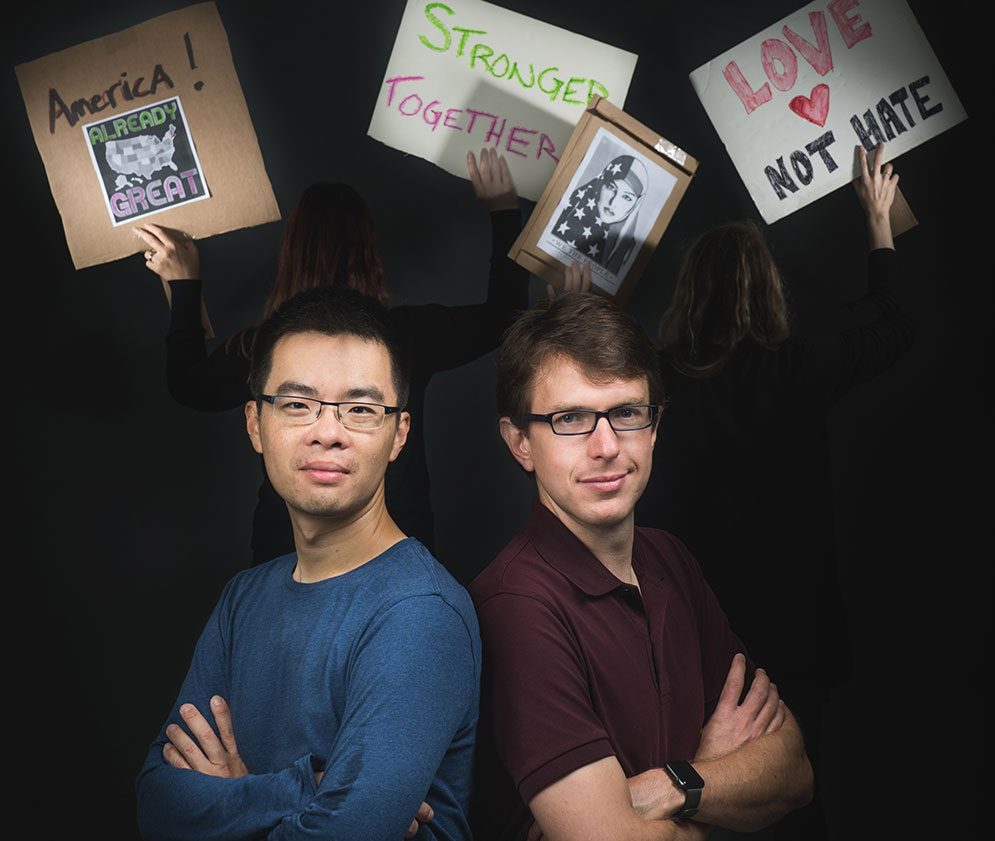 Earlier this year Tommy Leung (left) and Nathan Perkins (MED’18) launched a website that chronicles all protests against the current administration, hoping to give the data to government officials as evidence of the issues their constituents are passionate about. Photo by Jackie Ricciardi.

Meet Tommy Leung and Nathan Perkins. Perkins (MED’18), a PhD candidate in neuroscience, who studies songbirds, and Leung, a software engineer with a PhD in engineering systems from MIT, have a side gig together: counting protests.

Since the 2016 presidential election, Americans have been protesting issues from health care to immigration. Earlier this year, Leung and Perkins launched their site Count Love, which chronicles all protests against the current administration.

They wanted “to turn that protest activity into something that could be used to make a larger point,” Perkins explains. Leung says they hoped their data could eventually be given to government officials as evidence of the issues their constituents are passionate about.

To gather strong, reliable data, Perkins and Leung opted for a conservative approach: they skipped Twitter and Facebook in favor of local media accounts of American protests. Since January 20, 2017, they have recorded about 4,296 protests with more than 5,402,011 attendees (as of October 11, 2017), numbers they consider likely to be an underestimate.

Some of the most recent spate of nationwide protests occurred following the violent confrontation between white nationalists and counterprotesters in Charlottesville, Va., on August 12, 2017 (below). So far, Perkins and Leung have confirmed 351 Charlottesville-related protests involving 64,198 people, and while many have occurred in the Northeast, the two point out that “Charlottesville protests, like protests about health care, immigration, and civil rights, appear all throughout the country.” For them, the national distribution of the Charlottesville protests—and others—emphasizes that people all around the country care about the same issues. “We are not as different or divided as is often portrayed in the national media,” Perkins says.

He and Leung started their project after attending the Boston chapter of the Women’s March on January 21, 2017. “It was nice to see that so many people came out,” says Perkins. “But we were walking back and it was like, well, did that accomplish anything?”

They started by overlaying all the women’s marches onto a map of the United States (below), “just to say, look, people from all parts of the country came out,” says Perkins. “Just something a little more permanent.” Soon after the Women’s March, people began protesting the Trump travel ban, and then other issues. “We realized there was this momentum,” says Perkins, adding that while big protests in cities like New York get the most national coverage, there are many more smaller protests happening in cities and towns nationwide.

To capture the full scope, Perkins and Leung built a software tool that visits local online newspapers and television station sites every night and identifies articles that include the terms “protest,” “rally,” or “march.” They parse the articles manually and pull out relevant data, including when and where a protest occurred, what was being protested, and how many people attended. The project started with a few hundred local newspaper and television sites, but now includes more than 2,000. They update the site nightly with the most current protest data. Below are their results through October 11, 2017.

“The travel ban was much more organic; people just went to their local airports,” Perkins explains. “There were some very big and sustained protests at cities that do act as crucial ports of entry, but the travel ban mobilized protesters in large numbers throughout the country,” as seen in the map below. Perkins adds that protests occurred in places that aren’t particularly associated with large immigrant populations, such as Boise, Idaho, Joplin, Mo., and Portland, Maine. In the month following the initial travel ban on January 27, 2017, Perkins and Leung confirmed 433 American protests related to immigration with at least 219,045 attendees. They also mapped the most commonly protested issue in each state (below). Immigration is protested the most in southern border states like California, Arizona, and Texas, and in states with large immigrant populations like New York and Massachusetts. Civil rights protests are most common in central states such as Colorado and Minnesota, while racial injustice tops the list in southern states such as Virginia, Georgia, and Tennessee. Only in Nebraska are executive protests—general protests of the current administration not associated with a specific policy or event—most common.

“People will put the effort into protesting and standing up for an issue if it has more immediate relevance,” Perkins says. “Ten people come out in this teeny town, and they’ll hold a little sit-in or talk about how much they appreciate the Affordable Care Act.” Most Commonly Protested Issues by State Most Commonly Protested Issues in Rural and Urban Counties They also hope that someday their approach of extracting structured information from local newspaper and television stories can be adapted to look at topics like gentrification, housing, and education on a national scale.