Students to file for BU News Service today through Saturday 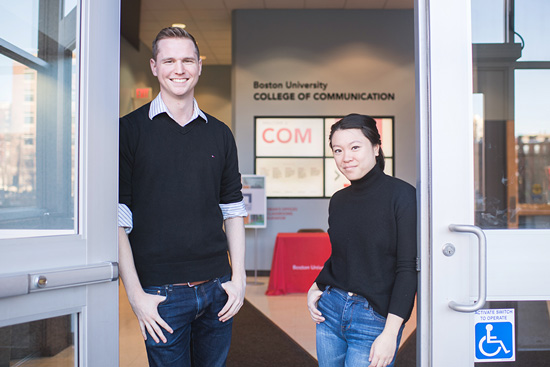 Most of the nation will watch Donald Trump’s inauguration tomorrow from the comfort of their own homes. It will be more frenzied for journalists Sarah Toy and Rob Carter. While it’s possible that upwards of a million people may be at the ceremony to celebrate, or protest, the 45th president, Toy’s and Carter’s fingers will be flying across their keyboards, editing reams of news copy and multimedia from a team of tail-busting Terriers for posting ASAP.

Toy (COM’17) and Carter (COM’17) will be headquartered at the DuPont Circle office of BU’s Washington, D.C., Journalism Program as a half dozen fellow student journalists from Boston and three or four from the Washington program file stories, video, photos, and social media coverage for the Boston University News Service (BUNS), which since election night 2012 has immersed College of Communication students in covering real-world news.

“We’ll have student reporters at the swearing-in ceremony and stationed along the parade route. We’ll also have people covering protests around town, including the much-anticipated Women’s March,” says Toy. “There will also be students reporting from Boston, so we’ll have a local angle as well.” The Women’s March on Saturday is expected to draw hundreds of thousands advocating on behalf of women’s rights. Millions more will be marching in almost every state and around the world.

Trump’s swearing-in will cap a year and half of grueling campaign reporting by BUNS.

“We pride ourselves in providing opportunities for our students to do journalism,” says BUNS advisor Michelle Johnson, a COM associate professor of the practice of journalism, who has accompanied the students to Washington. “In covering the election these past 15 months, our students have had a chance to produce stories at campaign events and interview voters and delegates at the conventions last summer. And we were in New York City on election night. It’s been quite a ride.”

Washington program director Walter Montaño says that about 15 BU students covered Barack Obama’s second inauguration four years ago. This time, “given the bizarre nature of this election,” starting with a president-elect who has raised many questions about his policies, “any manner of content goes” for coverage, Montaño says. Possible stories will include “women who support and who dislike Trump, millennials on both sides of the aisle, veterans, government bureaucrats, ‘foreigners,’ African Americans, other journalists, blue collar types, the homeless, and Latinos/Hispanics.”

“The event will be momentous in every way,” he notes.

The BUNS coverage will span the inaugural preliminaries today, tomorrow’s events, and Saturday’s march. “We’re trying to give readers a full picture of the weekend,” Carter says. “That means coverage of the swearing-in ceremony, obviously, but a lot more happens than just that. We’ll have our team at protests, along the parade route, and hopefully in some of the inaugural balls throughout the city.”

BU is sending its students well prepped, professionally and personally. “We were given a fairly detailed memo compiled by journalism faculty on how to stay safe, which everyone is required to read,” according to Toy. BUNS has also been busy contacting credentialing officials for the sundry inaugural events “to keep surprises to a minimum,” Carter says.

As daunting as a presidential inauguration is, Toy says, “it’s a huge opportunity for us students to get on-the-ground experience that we wouldn’t get otherwise. There’s no simulated classroom exercise that can replace this sort of thing.”

“There’s a reason to study in a major East Coast city and this is a perfect example,” adds Carter, a self-dubbed NPR junkie who aspires to work in public radio. “We’re going to be covering the same story as every major news outlet in the country. It’s fantastic experience that we will be able to point to when future employers ask whether we are ready to report on a major story.”