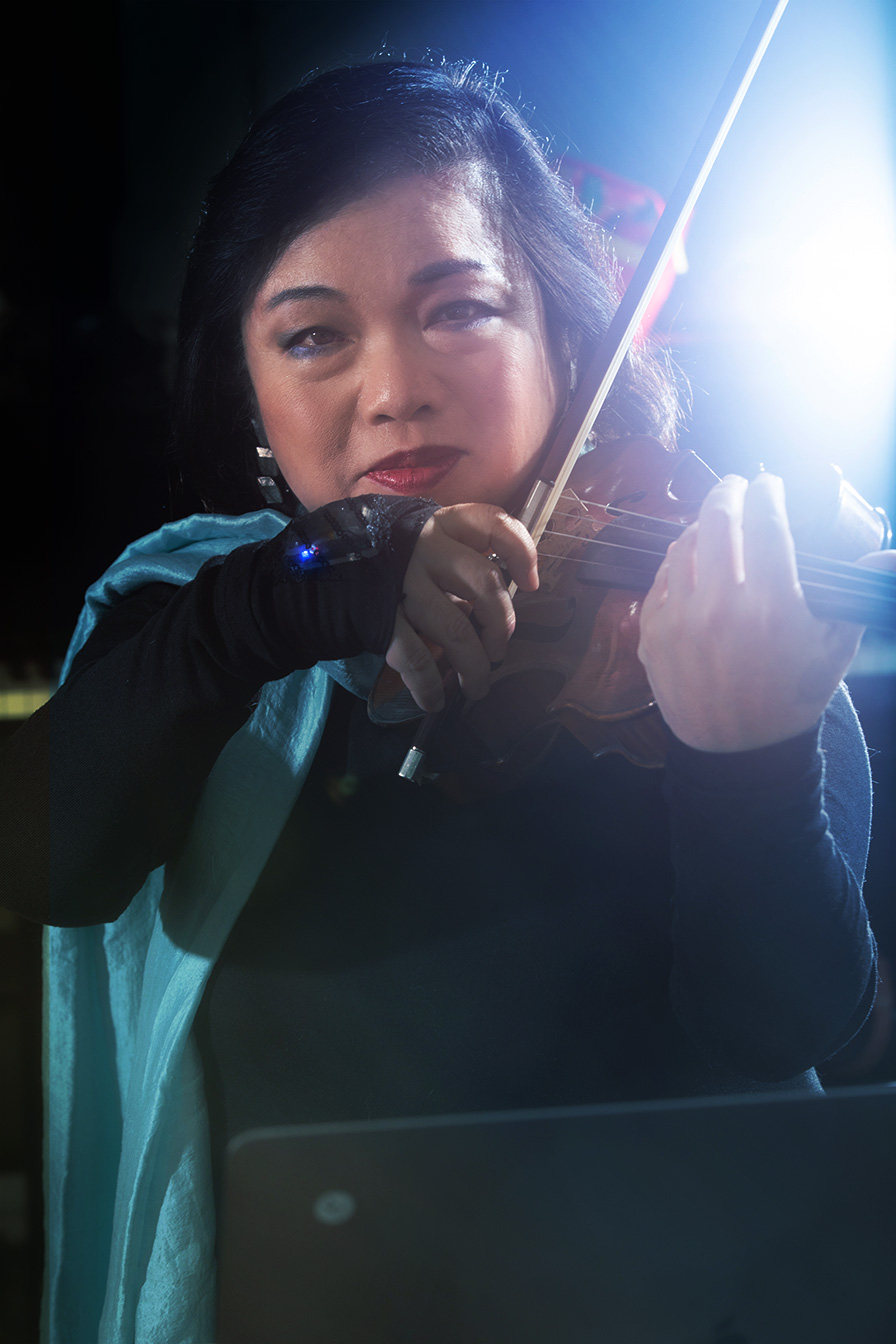 Mari Kimura grew up outside Tokyo in a solar house, one of the first in Japan. Her father was an architecture professor and a solar energy pioneer, always experimenting, and when she was little, the 1973 oil crisis made him famous and drew TV cameras to their home.

One day, “I remember so clearly playing outside in the cold winter light with a friend, and my shadow was very long,” says Kimura (’88). “I saw the shadow of my house, and there’s this sort of arch that shouldn’t have been there. So I look up, and it’s water gushing out of the solar panels because the pipes froze and erupted. I rushed into the house to tell my father, ‘There’s water coming out of the house! You have to go up on the roof and fix it!’ I was beside myself. And to my astonishment, he ran around the house shouting, ‘Where’s my camera?’ Fixing was not his priority—he had to document it.

“I grew up like that,” says the violinist, composer, and tech innovator, smiling. “Experimenting was in my blood, in a way.”

Now a professor of music in the Integrated Composition, Improvisation, and Technology program at UC Irvine’s Claire Trevor School of the Arts, she is renowned as a violinist, performing with symphonies around the world, as well as for her innovations in “subharmonics,” a special bowing technique that produces notes an octave below the violin’s lowest string. She was invited to join the faculty at UC Irvine in 2017 in large part because of her growing use of digital technology, particularly motion detectors attached to her bow hand. The feedback she gets from the sensors—metrics such as the angle and acceleration of her arm—guides her own performances or the sounds, lighting, and projections that accompany them, and drives collaborative works with other artists.

She even has her own one-woman company, Kimari LLC, to develop and market her patented motion sensor, called MUGIC® (Music/User Gesture Interface Control), worn by her students at UC Irvine and the summer Atlantic Music Festival in Maine. The Wi-Fi sensor can create sounds, change lighting, and generate and control visual effects. Kimura wears the device in a glove on her bow hand; others attach it to their instruments or to wristbands or ankle straps or anywhere else that provides relevant data. The sensor is being used at institutions such as Harvard, Juilliard, and the University of Chicago.

Experimenting was in my blood.

“Technology works for her in the same way it has worked for great artists for thousands of years,” says John Crawford, a professor of intermedia arts at UC Irvine who’s been collaborating with Kimura since he helped recruit her to the school. “At one point, the violin she plays now was seen as cutting-edge technology. They had to not only invent it but invent methods of playing. She finds ways of adapting technology to her own creative pursuits.

“The MUGIC device is a perfect example,” Crawford says. “People have done different kinds of motion tracking before, but she has found a way to harness the capabilities of these little chips and batteries and pieces of plastic to create new forms of expression. It’s extremely influential, really interesting, and a lot of fun to work together on.”

Kimura also has intellectual roots in the culture of innovation around Boston and Cambridge. Her parents met as Fulbright Scholars on a ship coming to the US; her father, Ken-ichi Kimura, was headed to MIT, and her mother, Aiko Kimura, a social scientist focusing on women’s labor laws, to Mount Holyoke and later Radcliffe. They married in the MIT Chapel, and returned to Japan when Aiko was pregnant. Kimura was born in Tokyo.

Kimura graduated with a degree in violin performance from Toho Gakuen School of Music in Japan (which also counts former Boston Symphony Orchestra music director Seiji Ozawa among its alumni) and came to BU to earn her master’s, studying under Roman Totenberg, the late CFA professor emeritus of music and a friend of her undergraduate mentor in Japan. She went on to receive a doctorate in musical arts from Juilliard.

Kimura’s interest in the intersection of music and technology, she says, began in earnest at BU—on and off campus.

To fulfill a requirement, she took an electronic music class, in which she was the only woman, she says. Samuel Headrick, a CFA associate professor of music, composition, and music theory, introduced her to a whole new world of sounds that were then produced largely by analog synthesizers.

While studying at CFA, she rented a room on Carlton Street in Brookline, near the BU Bridge. She was drawn into the social circle of Marvin Minsky, the late MIT computer scientist and a force behind that school’s artificial intelligence and media labs, who lived nearby on Ivy Street.

“I didn’t know how famous he was or anything, but I started hanging out in his kitchen,” Kimura says. “I got exposed to all these AI people and creative minds. And he said, ‘Oh, so you’re a violinist? What are you going to do if you lose your hand? You should start composing.’ And I’m like, ‘Who is this crazy person?’”

Together, Headrick’s class and Minsky’s prodding changed the course of her career. She learned about the groundbreaking work of the late Mario Davidovsky, a professor of composition at Columbia who became known for pairing electronic sounds with acoustic chamber music. She began integrating electronic elements into her own compositions and performances. She was eventually recruited to teach at Juilliard and NYU and was a visiting researcher at Stanford’s Center for Computer Research in Music and Acoustics.

Along the way, she met and married a French mathematician and computer scientist, Hervé Brönnimann, who works in the hedge fund industry. Their daughter is a psychology student at UC San Diego, and their son joined the US Army Reserve this past year after graduating from high school.

Her work bringing the MUGIC to market has led her to pursue an executive MBA at UC Irvine, and her student cohort includes several veterans who, she says, “became a support group for me, the mom, saying, ‘Day or night, you can call us.’”

Kimura says she had moments early in her career where as a woman she may have been held back by the culture of the field. A white, male, prominent professor asked someone, ‘Who programs Mari’s sounds?’ thinking I wouldn’t be able to do it myself. I don’t think it was gender prejudice. It’s more like, ‘How can a violin player program for herself?’ The friend who got asked was more upset than I was.

“I have this image in my head of myself: I’ve been doing this very unusual thing for a classically trained violinist, and I have to have this huge machete to cut through the jungle and carve out the road I want to walk on,” she says. “So I thought, if I give machetes to five other people and we do this together, then the people behind us can go further and faster. That’s why I teach.”