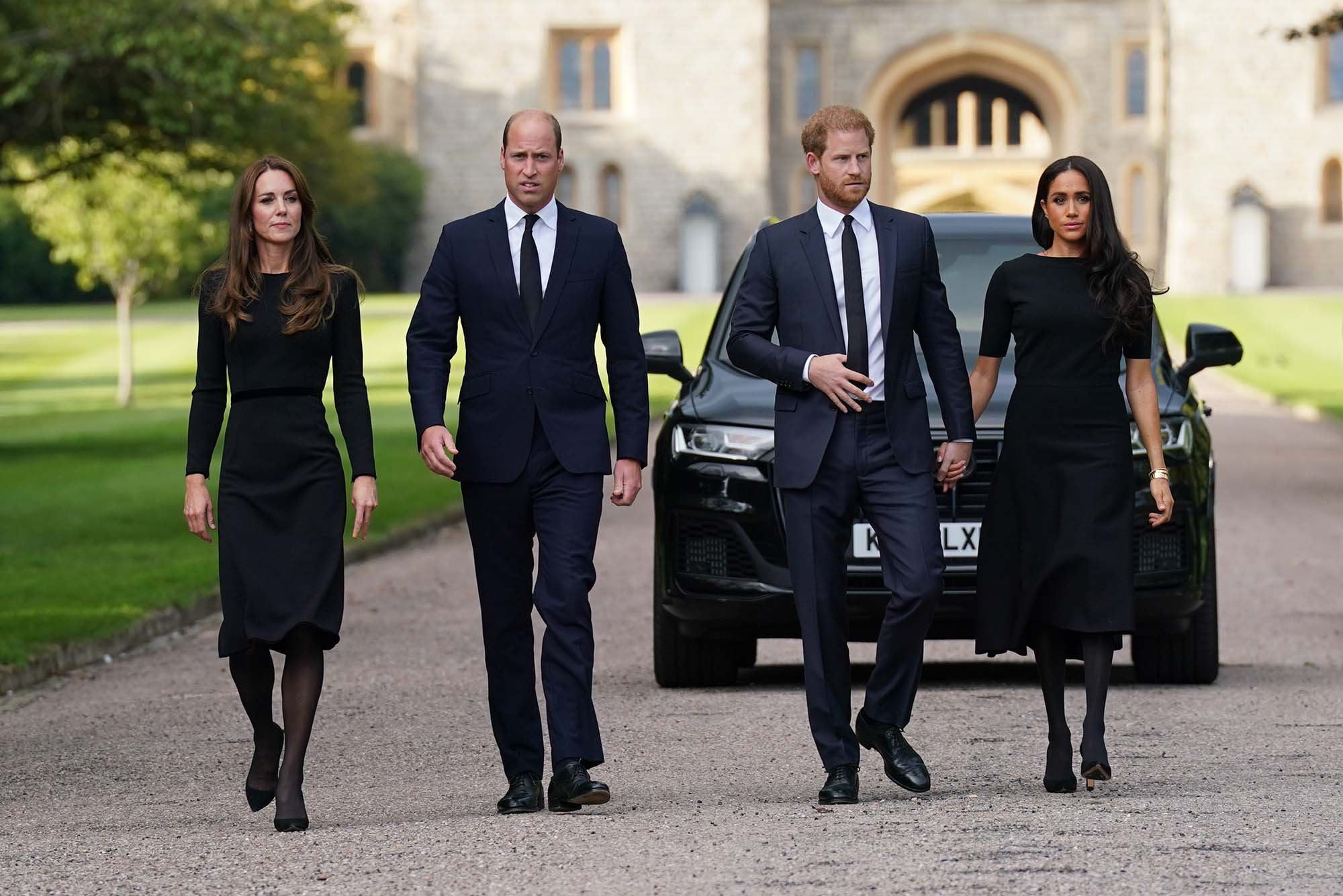 The last time the Prince and Princess of Wales (left) and the Duke and Duchess of Sussex saw each other in public was at Queen Elizabeth II’s funeral in September. (Press Association via AP Images)

Prince Harry’s Spare Is a Gold Mine for Historians, CGS Lecturer Says

The “self-exiled Prince Harry promotional tour” culminated last week with the release of the Duke of Sussex’s 410-page tell-all memoir, Spare. In the months leading up to the publication of the highly anticipated book, Harry and his American-born wife, Meghan, Duchess of Sussex, were the subject of two Oprah specials, various profiles and podcasts, and a six-hour Netflix confessional. Many wondered: what was left to say?

The answer turns out to be “quite a bit.” Among the book’s revelations: During one argument, Harry was pushed so hard by his brother and heir to the throne, Prince William, that he fell to the ground. The brothers urged their father, King Charles III, not to marry his longtime love, Camilla Parker Bowles, now Queen Consort of the United Kingdom. And sisters-in-law-to-be Meghan and William’s wife, Kate, Princess of Wales, sparred in the days leading up to the Sussex wedding over flower girl dresses. Another major point that Harry (aided by his ghostwriter J. R. Moehringer) drives home: details about how the British tabloids made him and his wife miserable in their endless pursuit to sell papers, and how little his family did to help the couple.

The grandson of England’s longest reigning monarch, Queen Elizabeth II, Harry shocked the world in January 2020 when he and Meghan announced they were stepping back as senior members of the royal family and moving to the United States. In a March 2021 interview with Oprah, the couple revealed that Meghan and their infant son, Archie, had been subjected to racist treatment by unnamed members of the royal family.

Random House, Spare’s publisher, reportedly paid a $20 million advance for the book, which sold a whopping 1.4 million copies on its first day of release, breaking the record previously set by President Barack Obama’s 2020 memoir, A Promised Land. Harry has promised to donate a portion of his proceeds to Sentebale, an organization he cofounded that supports children living with HIV/AIDS in Botswana and Lesotho, in honor of his mother, Princess Diana.

Kathryn Lamontagne (GRS’16,’20), a College of General Studies lecturer in social sciences, is an expert on modern British and European history, and worked in the Royal Household at Buckingham Palace during the Queen’s Diamond Jubilee celebrations in 2012 and 2013, while a teaching fellow at BU London. BU Today spoke to her about Prince Harry’s revelations, the mystique that the royal family continues to try to cultivate, and the effect his new memoir could have on their reputation.

BU Today: What are your initial thoughts after finishing the book?

Lamontagne: So, I’ve been reading as well as listening to it on Audible, and I like listening more. [Harry narrates the audio version himself.] I think it’s one of the most engaging books I’ve read in a really long time. I thought there were some parts of this book that were incredibly moving, hearing his voice catch in certain parts when he’s talking about his mother. And when he talks about having a pint with the lads, he has a little laugh that comes through as he’s reading it. These are really beautiful human moments that we would not see from the royals traditionally. The only comparable moment that I can think of would be the royal family documentary [in] 1969, which was highly produced and certainly not revealing moments of anomie.

What also struck me [when] listening to the audiobook is that we generally don’t truly know what members of the royal family sound like because we hear them speak so rarely. Yes, the [monarch’s annual] Christmas speech, but lesser royals are generally not heard often enough to be recognizable. To have the Duke of Sussex effectively provide an oral history of his life from his perspective is extremely powerful historically. He threads through the text the idea of memory, as well, so it is clear that he is very aware that memory is subjective and that he is rediscovering his own life as part of his process.

The theme of dulce et decorum est pro patria mori [“it is sweet and honorable to die for one’s country”] was threaded through, a reference to the First World War, but also a standard upper-class British idea of loyalty and duty. He was brought up with a very specific understanding of Britishness and Englishness that reflect this and was then further inculcated at school and through childhood play. Even the image on the back cover of the book depicts him as a child in military uniform. His sense of duty has shifted now to his own family, and while his country and extended family are still important to him, this text provides us with, perhaps, a window into contemporary royal life that we might never get a glimpse of again.

Is it unusual for a royal family member to be open about their feelings like this?

If we consider Princess Margaret [sister of the late Queen Elizabeth II], she was a free spirit that was stifled—some could argue strangled—by her position. Her status both afforded her an elite lifestyle while preventing any true personal growth. I give Harry credit for being able to find his voice and be unafraid of putting it out there. However, a lot of people would disagree that his private battles should be exposed, and many in Britain and America are completely appalled that he would be so revelatory.

BU Today: Can you talk about the meaning of the book’s title, Spare?

Lamontagne: I think it was a genius title. The term is an “heir and a spare.” A firstborn is required to inherit the throne (preferably a male heir because of primogeniture, but not necessary now), and then [have an] extra in line, just in case something happens to the first one.

The Queen had four children, but when it’s just two there seems to be more constant comparisons: there’s the good one and the naughty one. We saw this with HRH the Queen, and Princess Margaret, too. Also, there’s that kind of wordplay with “spare,” feeling like you are extra. You’re not completely needed, but also being empty. I think it’s a very powerful commentary on how he has seen his life to this point.

BU Today: Do you think Harry’s accusations and his feelings are going to cause harm to both his long-term relationship with his family and the royal family’s reputation?

Lamontagne: There’s some really personal information in both the book and in the Netflix documentary. There were a lot of private problems that I think, even in an average family, you wouldn’t put on social media. I was left wondering if this book is him figuring out in real time who he is, or if he is working through trauma in a very public way with the hope that the publicness of it will bring some kind of cathartic conclusion with his brother and father. The last portion of the book is fairly damning of his brother and sister-in-law, the future king and queen, and I fear that his “American” honesty will instead push them further away from feeling any desire to rehabilitate the relationships or connect the cousins.

Certainly in Britain, people are reacting to it strongly. [They’re saying], “You wanted to be private, you wanted to have your own time. Why do you keep resurrecting these same issues?” It seems to be harming the public opinion of him in Britain particularly. It is all simply too public for them. When you ask Americans, people don’t just give an answer. They think, they pause, then they kind of change their mind as they’re talking about it. There are so many different issues to unpack regarding class, race, death, trauma that it seems hard to know where to start.

I think that, in general, for the royal family as a whole, their positive popularity is certainly not at its height like it was during the Queen’s Jubilee last year.

BU Today: Given the Netflix series, the numerous TV interviews, and now the book, is there a limit as to how much people want to hear about the Sussexes?

Harry, the Duke of Sussex, is not meant to be a reality TV star. But we have somehow become part of a reality TV movement, a family drama. Now that they have produced the documentary and the book, the Sussexes have had a unique opportunity to tell their side. Historically, they have done their job. But, in this age of tabloid journalism or reality TV, it might be time for them to pull back and begin the work of rebuilding their family out of the public eye, if possible. As a historian, I relish the primary sources being released in real time and not held in the archives, but I have empathy for them as a family and hope there can be some coming together in the future.

Having said this, structural racism remains a serious problem, so it is important that they continue to discuss this, to advocate for change institutionally and internationally. We saw this for example, when Prince William’s godmother [made those damning remarks] directed at the director of Sistah Space, Ngozi Fulani. That institutionalized racism is so deeply embedded in so many Britons that they don’t realize it. It is important that someone is speaking out against it. So, I hope that he’s not silenced in that way. That’s an important conversation that needs to be ongoing.

BU Today: What else struck you as you read the book?

Lamontagne: In chapter 19, he introduced this idea of Divine Right and how royals were once afforded the deepest respect, but his experience was oppositional to this—terming himself “an insect” and one could “pluck their wings…for fun.” I think this is particularly fascinating because it shows a slippage—wanting respect for position, but also there is engagement throughout the book with desiring “normalcy” and “privacy.” This brings us back to the main issue for many of the public—can he have it both ways: a private life and a public life to turn on and off at will? I don’t know if it is helpful for them to be taken off the shelf—meaning, do they need to stay apart from us to remain “special”? Or is it humanizing them in a way that Diana had previously humanized them?

You know, I’ve stood next to this man in pubs before. You have this opinion of who he is, which is largely from the press, but also [from] one’s own networks. And it just shows you that we think we know something about their lives, but maybe we really never know. And even as historians, we write books analyzing why people do things and why things happened. But, perhaps we can never really, truly know the motivations of these historical personages and how they have reacted in these particular moments.

Prince Harry’s Spare Is a Gold Mine for Historians, CGS Lecturer Says

There is 1 comment on Prince Harry’s Spare Is a Gold Mine for Historians, CGS Lecturer Says

Prince Harry’s Spare Is a Gold Mine for Historians, CGS Lecturer Says
1
share this