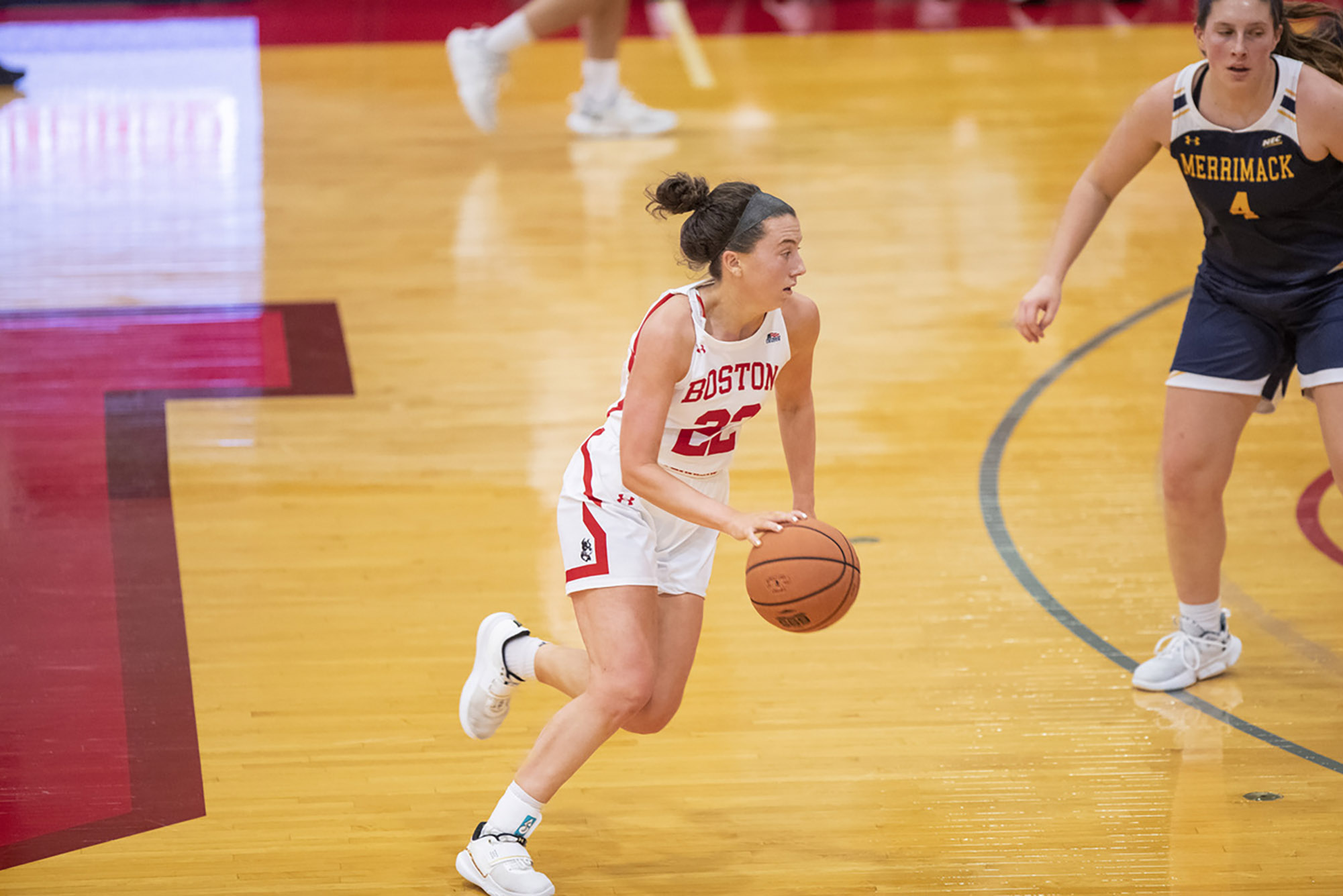 Women’s basketball captain Maggie Pina (CAS’22, MET’24) dribbles into the offensive zone during a game against Merrimack December 7, 2022. Pina has started every game for the Terriers this season, and leads the team in three-pointers. Photo by Matt Woolverton

Playing a single Division I sport at any university is a daunting challenge. Academic deadlines compete alongside a demanding practice and game schedule. But for Boston University women’s basketball cocaptain Maggie Pina (CAS’22, MET’24), now a graduate student pursuing a master’s in criminal justice, when the opportunity to join a second varsity sport arose, it proved too tempting to pass up.

By her junior year, Pina had already boasted an impressive resume, both on and off the court. She scored over 600 career points after having earned 2020 Patriot League Rookie of the Year honors. Off the court, she was a perennial fixture on the Patriot League Honor Roll, and was completing her undergraduate degree a year early.

But prior to the start of the 2021–22 basketball season, Pina told women’s hoops head coach Melissa Graves she wanted to try out for the BU field hockey team, while continuing with basketball.

Pina was a multisport high school athlete in Pennsylvania, playing on the varsity field hockey and basketball teams at the Academy of Notre Dame de Namur near her hometown of West Chester. As a rising senior, she had committed to playing field hockey at Villanova University and made her decision clear to BU’s then-women’s basketball head coach Marisa Moseley, who was trying to recruit her to play for the Terriers. But “Coach Mo” persuaded Pina—with some help from Pina’s father, Joel, a Boston College graduate—to tour BU.

“I was basically just doing it to appease them,” Pina recalls. She told them: “I looked at it, but I liked Villanova better. About a week or so later, Moseley came back and offered me a full ride. That was just really hard to say no to—a full scholarship—with all the money my family put into my academics and athletics.”

When Pina arrived at BU, she thought she had left field hockey behind for good. But as she started making plans to pursue a graduate degree at BU, Pina, who had always kept a field hockey stick in her car, emailed field hockey head coach Sally Starr in fall 2021, hoping for a shot.

Last spring, Starr gave Pina a tryout as a courtesy. “I gave her an opportunity to try out with us in the spring thinking, ‘let’s just give her a week,’” Starr says. “After about two or three days, her athleticism and her passion showed, her skill set was good enough to be productive in our practices, and then she just continued to improve.”

After a spring season in which Pina saw playtime with her new teammates on New Balance Field, she completed her bachelor’s degree in political science last summer. And, this fall, Pina found herself gearing up to play for both teams.

“That just, like, sums up Maggie right there,” Graves says. “The will to succeed, the will to win, the will to prove people wrong. I think [playing] the two sports is a testament to her.”

During her first full season on the field hockey team, Pina played in 12 of the squad’s 19 games. Although she did not make it on the scoresheet in her 93 minutes, her presence helped the program go 5-1 in conference play, clinching the 2022 Patriot League regular season title.

“She’s a great athlete,” Starr says. “That instinct you have on the basketball court is the same that you need to have on the hockey field. She’ll sleep well at night because she’s at both [teams’] practices.”

“Nobody really doubted that she would make it because we know how hard she works,” basketball cocaptain Sydney Johnson (CAS’23) says.

Pina recalls Johnson and other basketball teammates traveling to her field hockey games, often waving a BU flag and pacing the sidelines. Their commitment often required them to travel, due to ongoing renovations to New Balance Field, where the team usually plays.

“They were always there screaming, especially Sydney leading [the] cheer—she’d bring a megaphone that normally gets taken away from her,” Pina says.

Johnson admits her megaphone was confiscated, but says that only motivated her to raise her voice even more. “Megaphone or not, I was gonna get them to hear me because what she was doing is really cool,” Johnson says. “Sometimes I would run up and down the sideline with a flag when they scored.”

The field hockey season ended November 5 with the Terriers falling 2-1 to Lehigh in overtime during the Patriot League Championship game, barely giving Pina time to turn her attention from the turf to the court.

“My teammates on basketball like to joke that I now have my [field hockey] speed, just being in shape and doing those different kinds of conditioning to give me a leg up,” Pina says. “I love having more people as a support system in college. I thought having 12 or 15 on basketball would be more than enough, but you can never have too many.”

“She was on two different lifting programs, two agility programs, two different practices, so I think the dual sport situation really helped her,” Graves says. “She’s guarding the best player night in and night out, where that was not her role in the past. I think that is just an attitude: ‘I want to get better at this,’ and she’s been working on it every practice.”

And it shows. Pina has started every game this season for the Terriers and has enjoyed career highs in shooting percentage (.472) and three-point percentage (.478). She has already surpassed her previous single-season totals in points, save for her 2020 Rookie of the Year campaign.

“It has become very apparent that she can make impacts in so many different areas,” Johnson says. “This year, she has really bought into being one of our best defenders. That girl has no fear, she will go into the basket just as much as she will shoot threes. I really just think she has taken on many different avenues that I don’t think she would have even really considered in years past.”

Now, as the Terriers prepare to host Navy, Pina and her teammates find themselves in a six-game winning streak, good for a 6-0 record in conference play. And players attribute much of their success to their cocaptain’s leadership.

“Maggie has shown me what you can achieve when you have discipline,” Johnson says. “She graduated in three years, she is a dual sport athlete and still has free time to watch TV. She’s really good at creating the culture around basketball as well as academics—being the voice of support for everybody, not just the younger kids, but really our whole team.”

The Terrier women’s basketball team hosts Navy at Case Gym Wednesday, January 18, at 6 pm. All home games and conference contests can be streamed on ESPN+, and fans can keep up with BU on GoTerriers.com and @TerrierWBB on Twitter. Tickets are free for students with a sports pass, $5 for students without a sports pass and for faculty and staff, and $8 for the general public.

For Grad Student Maggie Pina, Excelling at One Sport Isn’t Enough
0
share this