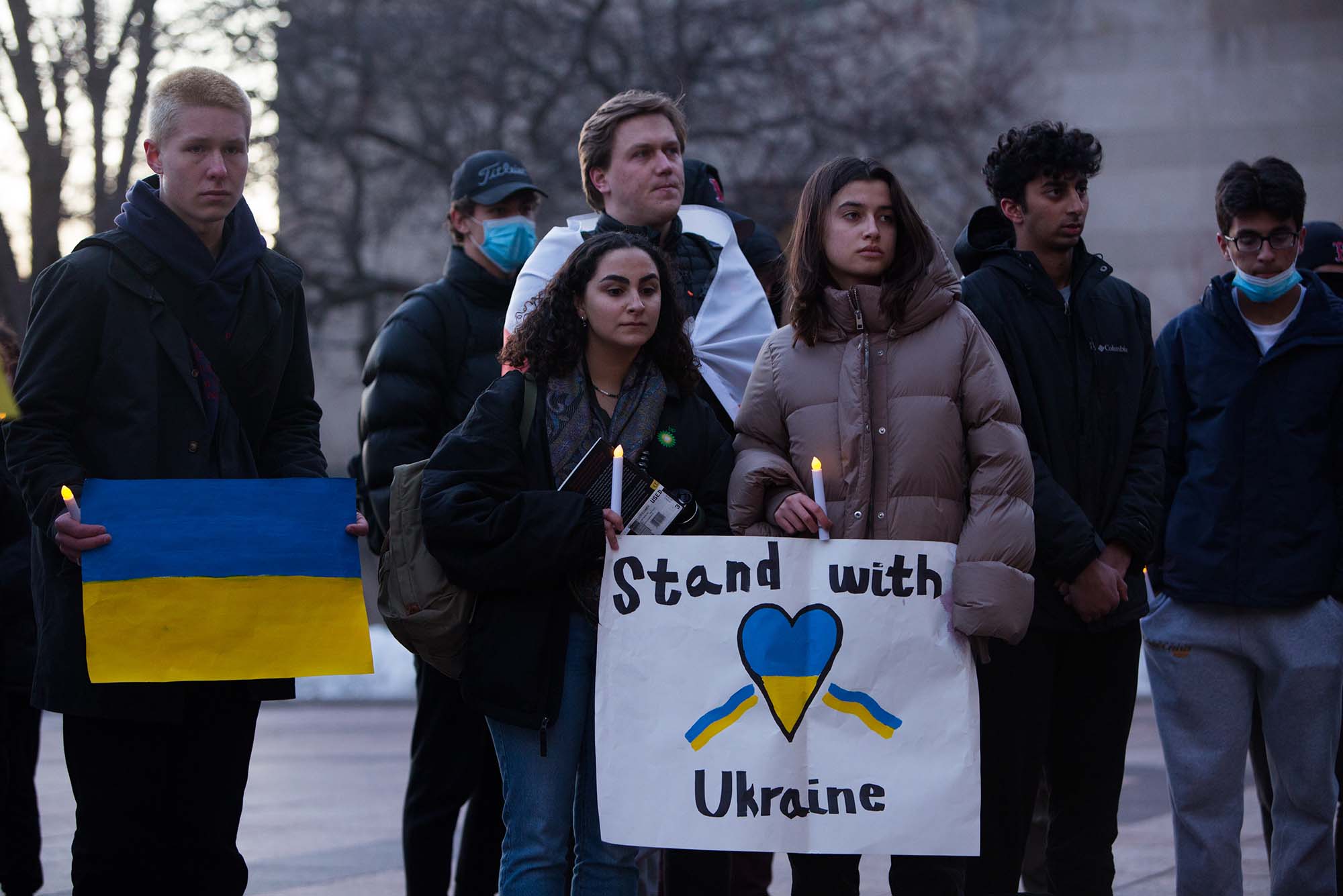 Elvis Friberg (Questrom’24) (front, from left), Regina Bravo (CAS’24), and Antonia Robay (CAS’24) at Marsh Plaza on March 3 for a protest and vigil in solidarity with victims of the war in Ukraine. Photo by Jake Belcher

President Brown: BU condemns “those who chose to launch an invasion,” proffers “sympathy to those who are displaced and suffering”

They are worried for their families. They are scared about the future of their country. They are nervous about keeping up with their studies on campus while distracted about war back home. They are thinking about jobs they need to cover bills or rent coming due. For 93 students at Boston University who call either Ukraine or Russia home, this is how they wake up every morning and go to bed every night.

“We reached out to students from Ukraine and from Russia just as the invasion started” on February 24, says Kenneth Elmore (Wheelock’87), associate provost and dean of students. “We’re thinking about you—if you need to talk to us, please let us know.”

One BU student, a senior finance major from Moscow and a member of the BU Russian Speaking Society, tells BU Today, on the condition that her name not be used, that she has appreciated the outreach from the University during these times. “I have very much a mix of negative emotions, constant anger, sadness, devastation, and the things I worry about the most are people in Ukraine, they are at the top of the list,” she says. “I also worry about finance issues, and about my visa. We don’t know what our country is going to look like in a month or a year.”

To foster a dialogue on campus about the crisis, a Town Hall on the War in Ukraine will be held Thursday at 4:30 pm at the School of Law auditorium, hosted by the College of Arts & Sciences, the School of Law, the Center for the Study of Europe, the Elie Wiesel Center for Jewish Studies, the Center for Innovation in Social Science, and the departments of political science and of history.

Additionally, faculty at the Frederick S. Pardee School of Global Studies have issued statements condemning the Russian invasion and articulating strategic approaches for diplomacy. “A great strategist should never allow situations to deteriorate to the point of the imminent breakout of major wars,” writes Min Ye, an associate professor of international relations. “Unfortunately, it is too late to prevent the Ukraine crisis, and it is imperative to find a way to stop World War III in Europe. The leaders need to move expeditiously and involve multiple stakeholders to negotiate a way out, while applying harsh sanctions and military deterrence to motivate peace talks.”

Since the Russian invasion of Ukraine, Elmore’s office has helped coordinate one-on-one assessments with affected students to find out what they need. They’ve learned that students are especially worried about how they can find a job to help pay their rent or bills, that they need housing for the summer, and that they hope to maintain an internship that’s already started or is scheduled. Graduate students and PhD candidates are worried about finishing the research they are doing.

BU will offer support to students who are adversely affected and experiencing financial or other hardships caused by the invasion of Ukraine, and through the University Service Center, will work with them to ensure that they are safe and able to continue their education.

“It’s very stressful for me, for everyone,” says Andriy Kolenov (CAS’25), who is from the Ukraine capital of Kyiv and talks to his family back home almost daily. “But everyone’s holding strong. The invasion has defined the past couple of weeks for me. It was hard to focus on midterms. I am just trying to stay healthy.”

He and other students started an Instagram account, @boston_support_ukraine, to host events and organize protests. “BU is doing a good job,” Kolenov says. “I just hope this crisis doesn’t wane in people’s minds until it’s resolved. It’s important people don’t shift their focus to other issues.”

The contingent of BU students with Ukraine addresses (16) is smaller than those with Russian addresses (58). Another 19 students identify as being from one of those countries, for a total of 93 that the University is working with. Students from both countries have participated in vigils around Boston, and have been wearing blue and yellow pins and masks—the colors of the Ukrainian flag—in support of the Ukrainian community.

“I am deeply troubled by the unprovoked, violent invasion by the Russian Federation of the sovereign, democratic nation of Ukraine and by the indiscriminate targeting that is leading to so many civilian deaths,” Robert A. Brown, BU’s president, tells BU Today. “My thoughts are with the families of our students from Ukraine who are living in this nightmare. We condemn those who chose to launch an invasion. We extend sympathy to those who are displaced and suffering.”

Brown echoes what Elmore says about BU reaching out to students from both countries, “bearing in mind that when an autocratic state launches a war, its citizens have no voice in that decision and many will be deeply troubled by the decision.”

Elmore says even though students from Ukraine and Russia come from two countries now at war because of Russia’s invasion, they have shown only sympathy for one another, with no noticeable animosity.

“We had a set of meetings with just Russian students and with just Ukrainian students, and overwhelmingly these students expressed understanding about the politics out there, driven by [Russian president Vladimir] Putin, and [do] not blame each other,” Elmore says. “I’d say it’s a majority. Some students do take a different approach, but also some Russian students want to show support for Ukraine and they are concerned about the reaction back home. Some students have said, ‘I am not going to tell students I am Russian.’”

My thoughts are with the families of our students from Ukraine who are living in this nightmare. We condemn those who chose to launch an invasion. We extend sympathy to those who are displaced and suffering.

BU has had early conversations with some Boston-area colleges, not so much to coordinate services, as to learn from one another, Elmore says: “We’re comparing notes—what are you doing, what are you hearing from Washington.” He likens it to the reaction and response to the COVID-19 pandemic, “where we work together on this and identify additional opportunities to work together.”

He says a big area where that communication is helpful is following how local, state, and federal governments are coming together “to help and support students.” As for BU’s meetings with students, he says, they have mostly been face-to-face to ensure that the students feel personally supported.

“We just have to think about how devastating this is, whether you’re Ukrainian or Russian. It feels like you are stateless all of a sudden,” he says. “It’s this incredible uncertainty.”

The Dean of Students office has also been working with Carrie Landa, BU’s executive director of student wellbeing, referring students to her office if they need mental health services.

Elmore says BU is communicating directly with students, not their families, but he did hear from one family member, who simply told him, “Just take care of my son.”

The BU student who spoke anonymously says that while students have been allowed to order and put up Ukrainian flags and pins on campus, she wishes the University had been more forceful with an official statement early during the invasion. “I know it’s not simple, and there are complications,” but the volume of propaganda from Russia, where citizens are required to call the war “a mission of freedom,” she says, is scary and requires forceful statements condemning it.

Most people do not understand that Russia and Ukraine are like close sibling nations, where everybody has family or friends living across the border, she says, and that closeness is true at BU, where the Russian Speaking Society has become a space for students to stand together. “We’re hoping it will be over soon. My family is thinking of leaving the country, as are a lot of people,” she says. “My dad is originally from Ukraine, he was born there and has family there. Everyone is in such an emotional state of what’s coming next.”

For This BU Alum, Helping Those Fleeing Ukraine Is Personal

There are 7 comments on As Russia’s Attacks on Ukraine Continue, University Extends Efforts to Help BU Students Affected