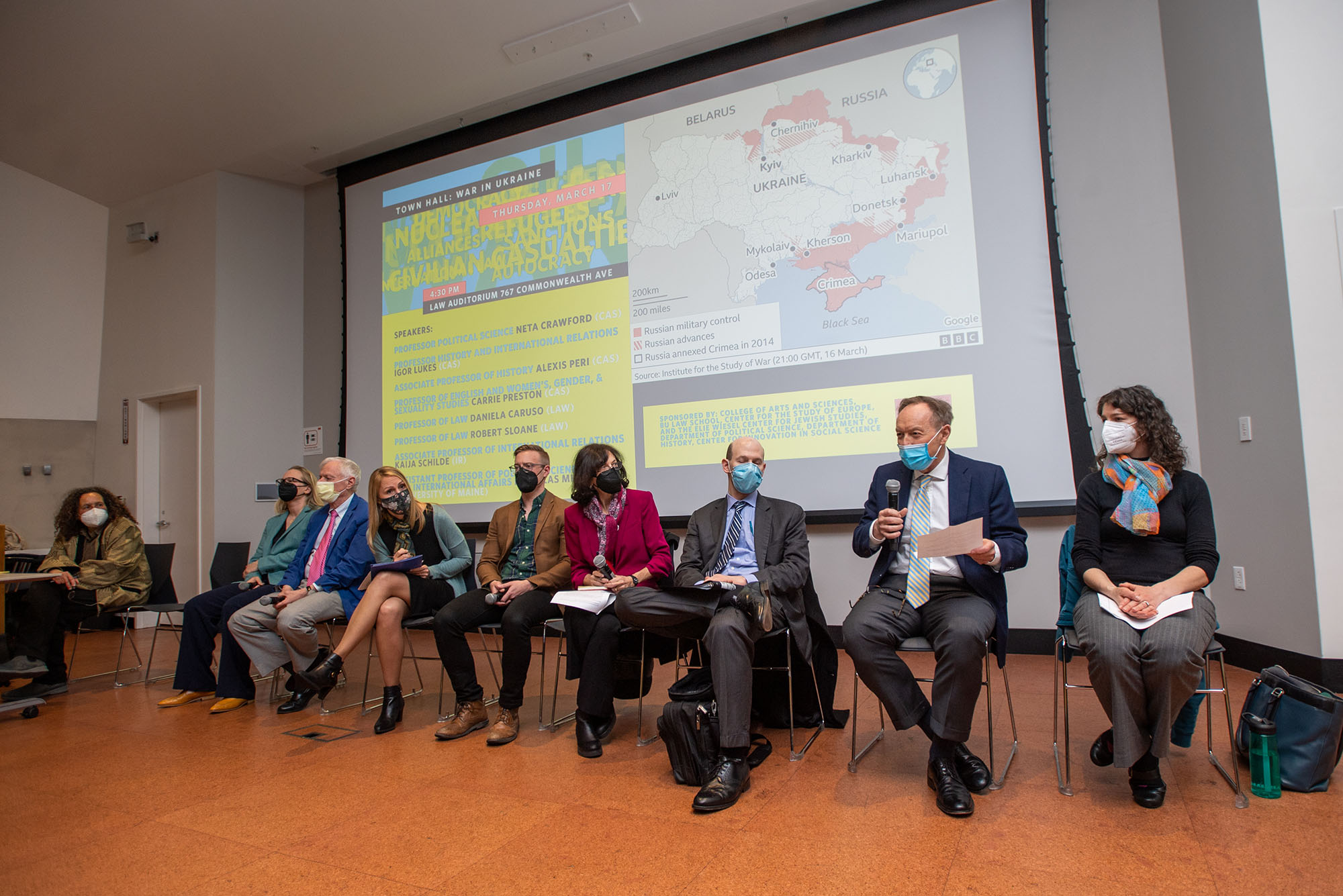 Nearly 200 attend event at School of Law, as faculty share insights on Russian invasion of Ukraine and field questions

A crowd of nearly 200, mostly BU students, filled the School of Law auditorium on Thursday for the University’s Town Hall: War in Ukraine, where a panel of faculty spoke about the conflict and answered questions from the audience.

There are no easy answers to why Russia invaded Ukraine, or whether this is the beginning of a larger, global conflict, or how Russian President Vladimir Putin will respond to the harsh economic sanctions being imposed, or whether the United States should be doing more to assist Ukraine. But there is certainly no shortage of questions. And on Thursday afternoon, close to 200 people, mostly Boston University students, filled the School of Law auditorium to hear faculty from across political science, international relations, gender studies, and law discuss the ongoing war and field audience questions.

Each faculty member, 10 in total, gave a brief talk, speaking from their own area of expertise. Igor Lukes, a Pardee School of Global Studies professor of history and of international relations, captured the enormity of the crisis, when he said: “Putin has already damaged Russia beyond repair for years to come.”

The event, Town Hall: War in Ukraine, came one day after Ukrainian President Volodymyr Zelensky made an emotional plea to Congress for more aid in its fight against Russia that began in late February. More than 7,000 Russian troops and more than 1,300 Ukrainian troops have reportedly died so far, in addition to roughly 600 Ukrainian civilians.

The BU event was moderated by Neta Crawford, a CAS professor and chair of political science, who spoke of the sanctions on Russia, the underappreciated environmental impact of war, and the looming threat of nuclear war. “Destruction produces smoke, which is a huge problem for people with vulnerable and asthmatic lungs,” she noted. But beyond that, war produces toxic materials that are released into the air, destroys wastewater treatment, poisons the ground and wells, and wreaks general havoc on the environment that can take years and decades to overcome, she said.

However, Crawford said she did not believe nuclear war is imminent, because the biggest deterrent of one country using nuclear weapons on another is that nuclear weapons could be fired back in response. “I doubt we’re there,” she said. “Blood pressure down.”

As each of the faculty members spoke, the screen behind them displayed a map of Ukraine, highlighting its largest cities, as well as its neighboring countries. Alexis Peri, a CAS associate professor of history, addressed what she said were several historical myths that have circulated about the war. One was that Russians and Ukrainians are the same people, a point that Putin repeats frequently. A second was that Russia is fulfilling a sacred mission “of saving the world from fascism” to revive and rejuvenate post-Soviet Russia.

Most professors spoke without the use of any images. But Carrie Preston, a CAS professor of English and of women’s, gender, and sexuality studies, displayed four images on the screen showing victims of the war. All the images were of white women and children, and she talked about a media bias and how the public response to this war and its victims have differed from the response to other wars. “It was only a few months ago that Poland, now being admired for its open borders, was preventing thousands of refugees from the Middle East and Africa from crossing—pushing back, by Poland’s own count, 29,921 into inhumane conditions,” said Preston, who is the director of the Kilachand Honors College and the Arvind and Chandan Nandlal Kilachand Professor.

Robert Sloane, a School of Law professor of law and the R. Gordon Butler Scholar in International Law, said that Putin had expected Zelensky to flee, the country to collapse, and the “Ukrainian people to shower Russian soldiers with flowers.” He said there were similar expectations when the United States went into Iraq in 2003, but there are important distinctions that must be remembered between that war and this one.

He said that President George W. Bush went to great lengths back then to argue there was a plausible explanation for invading, and he helped get a United Nations resolution passed to justify the action. “Putin hasn’t gone to much trouble to vindicate his statements” of justifying the Russian invasion, Sloane said.

The commitment of Europe is great. Europe really, really cares.

He added that Putin is showing little concern about bombs that have struck hospitals, civilian neighborhoods, or other locations filled with innocent civilians. “I fear as this war goes on, in a way Putin did not expect, we’re going to see more and more of that,” Sloane said.

Daniela Caruso, a LAW professor of law and the Jean Monnet European Union Professor, said another misconception is that just because Ukraine is not a part of the European Union, the EU is not fully invested in helping to protect Ukraine from Russia. “The commitment of Europe is great,” Caruso said. “Europe really, really cares.”

The audience was largely quiet during the town hall, but that changed toward the end when one professor said that he would give the United States “an A+” so far in its handling of the Russia-Ukraine war, making the point that “Putin had to deny that it was going to happen, then he did it.” When audience members lined up to address the faculty, one of them questioned US involvement in the war and the US decision to supply weapons to Ukraine, raising historical controversies from years past, such as the Iran-Contra affair under President Reagan and the invasion of Iraq under President Bush. Supplying weapons to these countries, he said, “only makes the conflicts worse and longer. How can you, when looking at American history, be confident and supportive of US intelligence agencies?”

The audience applauded. And moderator Crawford smiled, looked at the panel of faculty, and said, “You just threw red meat on the table.”

The event was sponsored by the College of Arts & Sciences, the School of Law, the Center for the Study of Europe, the Elie Wiesel Center for Jewish Studies, the CAS political science department and history department, and the Center for Innovation in Social Science.