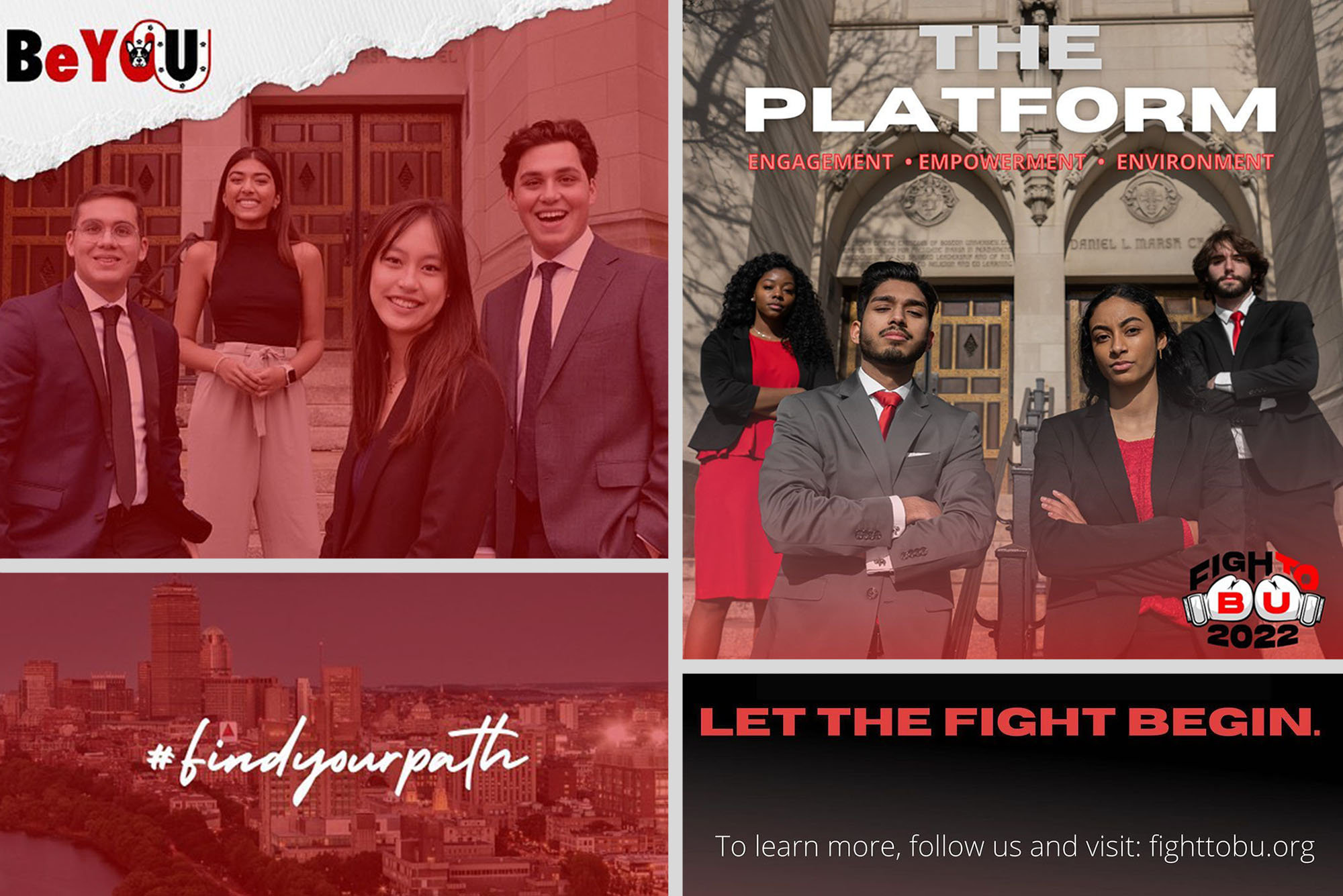 A list of the slates running, what they stand for, and dates you need to know

Did you know that over the years BU Student Government has been responsible for initiatives like refillable water stations, free menstrual products, and the creation of the BU Shuttle (the BUS)? Members are now preparing for their next round of elections, for the 2022-2023 school year, and candidates are actively campaigning.

Students will be able to cast their votes at the Student Link between March 28 and March 31. The results will be announced April 1, with a BU Today story to follow.

Voters will also choose a Senate-at-Large party (these parties represent student interests to the administration), proportionally elected into any number of eight available seats in the legislative branch. (“Proportionally” means if one party gets 50 percent of the votes, it will earn four of the eight open seats.) They will work alongside the college senators, the executive board, and the judicial board to enact and pass legislation. Any number of slates can win any number of seats in the senate.

This Wednesday, March 16, BU Student Government and the Student Elections Commission will host a town hall event from 7:30 to 9 pm in the George Sherman Union Backcourt, where students can ask the candidates questions and learn more about their platforms and plans. On Tuesday, March 22, the Student Election commissioners will hold a presidential debate from 6 to 9 pm in the Photonics Center Colloquium Room, with voting the following week.

Following is a look at the executive board slates and this year’s at-large parties and what they stand for, in their own words.

Platform: We are the BeYOU slate, running to be your next executive board of BU Student Government. We are dedicated to helping every student in our diverse Boston University community thrive by advocating for an enhanced academic and social experience. This means more feedback from BU students to Student Government, more communication between students and faculty, and overall, more action from Student Government. We will BeSupportive, BeTransparent, BeDiligent…all you have to do is BeYOU!

Platform: “Fight to BU aims to bring about transformative change on Boston University’s campus through a three-pronged platform centered around engagement, empowerment, and the environment. In order to bridge the gap between the student body and its elected government and fight for student-centered policy, we will:

Every one of your voices matters. Fight with us for a stronger community, an improved student life, and a better future. Vote Fight to BU. Thank you.

Platform: In just one year, our at-large senators have worked within Student Government on various diversity, equity, and inclusion (DEI) initiatives that have helped set in motion:

This next year we will continue to promote DEI on campus by:

With DEI as our priority, we have the initiatives, drive, and excitement to Impact BU.

Platform: The resources that BU offers are NOT adequate, and we, the students, are left to deal with our own mental health issues. We want to fight the mental health issues that many of us face at its core by promoting a healthier quality of life for students. The lack of community, culture, and conversation has been a consistent issue at BU, which was only exacerbated by the COVID-19 pandemic. Our at-larges’ goal is to increase campus interaction by uplifting already existing student organizations. We’d also like to provide new angles and ideas that would bring the school closer together. In attempting to foster a better connection between the entire student body, we’d also like to focus on underrepresented communities—primarily the student organizations who feel they don’t have the funding or platform to get more students involved.

Our platform is Identity, Representation, and Cohesion: we believe if these areas are addressed, we can significantly improve mental health and the quality of life on campus.

Our website is set up to gather immediate feedback from students to produce solutions. Our plan is to email and promote quick two-minute surveys to get honest feedback on the student life and social experiences. We hope this direct and open form of feedback will assist us in creating useful solutions and encompassing student ideas.

Platform: The Center for Gender, Sexuality, & Activism (CGSA) is the only completely student-run space on campus. We have been around since 2008 (where we started out as the Women’s Resource Center) and can trace our roots back even further. We currently have a space in the basement of the George Sherman Union, where students can hang out, meet new people, study, make some art, or decompress. We host six different clubs: Active Minds, Transgender Listening Circle, Students for Reproductive Freedom, Students for Justice in Palestine, the Feminist Collective, and Young Democratic Socialists of America. In addition to running the space, we also put together events and work on initiatives at BU.

We plan to advocate for those marginalized due to gender, namely women and nonbinary people, such as by working on initiatives to improve gender-neutral bathrooms on campus and to standardize gender-neutral language.

We plan to provide representation and advocate for queer people at BU by introducing our own LGBTQ+ inclusivity training for faculty and staff, which would especially highlight the use of pronouns and trans-inclusive language and behavior. With the introduction of the new Student Link system coming soon, where students will be able to provide such information with their professors, we believe that educating people on this topic will prove to be very pertinent.

The CGSA recognizes that the current narrative about wellness at BU—that we should just put on a face mask and do some yoga—is inadequate. We want to shift this narrative so that wellness initiatives are actually meeting student needs. One of the things we would advocate for would be the introduction of more Womb Rooms™ on BU’s campus. The CGSA’s Womb Room™ (which stands for Wellness of My Body Room) has variously been referred to as the “crying room” and the “nap room”; it is a room where students can be by themselves and take a nap or decompress. We have plenty of self-care supplies and comfy blankets and pillows. If you want to learn more, come check out the Womb Room™ in the CGSA.

The CGSA has always been a huge part of SA advocacy on campus; we even played a pivotal role in the establishment of SARP (Sexual Assault Response & Prevention Center). Thus, we recognize that BU has a sexual assault problem, both with how often it happens and how it is dealt with. We are currently working with SARP on creating a training on how to support SA survivors, which we hope to distribute widely to students and student groups on campus. We also plan to work on initiatives to improve consent training for all students, especially in Greek Life, and work with other student organizations to improve education on these issues.

Goal #5: Support and uplift the CGSA’s clubs and their goals

The CGSA’s clubs are at the heart of the CGSA. We hope to provide underrepresented students from these groups a larger voice in Student Government to better accomplish their goals.

Platform: We are running as an at-large party because we have experienced the challenges of starting (or in our case, reactivating) a student organization [Helping Hands for the Homeless], and believe that the University can do more to help disadvantaged individuals in the city of Boston and beyond.

One of our party’s two goals is streamlining the Student Activities Office to make it more accessible and supportive for those leading or attempting to start student organizations, with measures such as fixed dates (announced at the beginning of every semester) for submitting applications, as well as fixed dates for when people can expect to hear back, direct email updates about opportunities such as Splash, and closer collaboration with newly started groups. Our other goal is to have the administration contribute more to service-related student organizations by streamlining relationships with the University Service Center, having less strict guidelines around advertising methods such as hanging up flyers, and having Boston University give any service organization a budget of $500 per semester to be spent on organization resources, towards donations to relevant charities, or returned to the administration by the end of the semester.

Editor’s note: BU Today did not receive answers from the at-large party BU Catholics by the required deadline.

There is 1 comment on Student Government Elections Heat Up