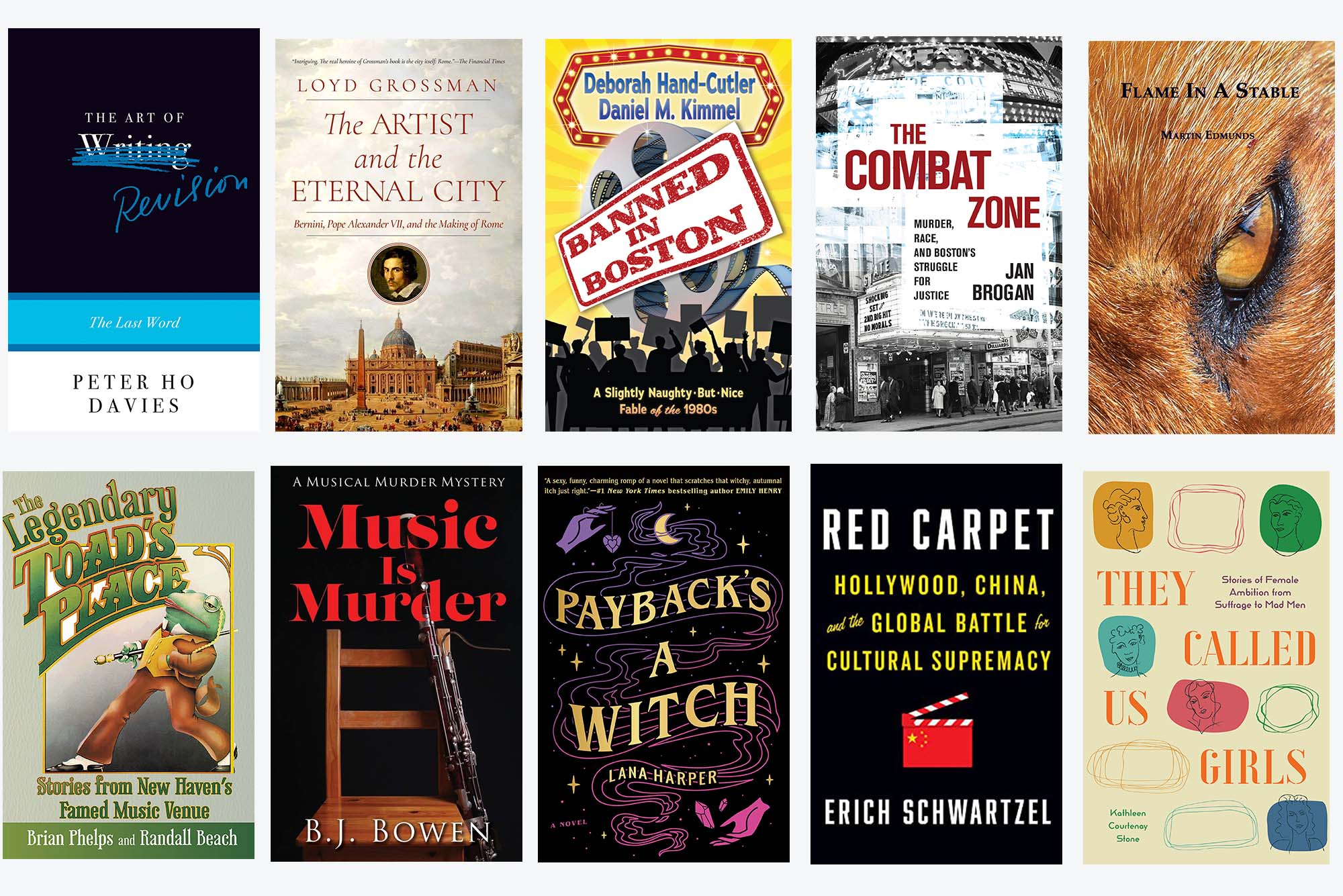 The novelist (A Lie Someone Told You About Yourself) draws on his own work, other writers, and even movies and comics to offer a practical but deep-thinking reflection on how to proceed after that first draft.

The Artist and the Eternal City: Bernini, Pope Alexander VII, and the Making of Rome
Pegasus Books, 2021
By Loyd Grossman (CAS’72)

An exploration of history, art, and power in Baroque Rome by the BBC journalist makes the case that the collaboration between the artist and the pope changed how we will see the city forever.

Coauthored with Deborah Hand-Cutler, the satirical novel looks at what happens when a 1980s Boston antipornography group tries to stave off bankruptcy by secretly financing their own “dirty” movie and then publicly leading the protests against it.

Journalist and BU Summer Journalism Academy faculty member Brogan looks at the end of Boston’s Combat Zone, aka the “adult entertainment district,” after the 1976 murder of Harvard football player Andy Puopolo and the ensuing controversy over race and justice in the city.

Flame in a Stable
Arrowsmith Press, 2021
By Martin Edmunds (GRS’08)

The poet’s first collection since the award-winning The High Road to Taos a quarter century ago takes on phenomena of our moment, from Zoom to churches “closed for COVID” to encounters with vets of foreign wars.

Music journalist Beach and Toad’s Place owner Brian Phelps cowrote this enthusiastic collection of behind-the-scenes tales from the 750-capacity New Haven, Conn., rock club that hosted a bunch of then-unknowns called U2, as well as surprise gigs by Bruce Springsteen and the Rolling Stones.

“Bashed with a bassoon” has a lovely ring to it, no? In this cozy murder mystery set behind the scenes at a fictional Colorado symphony, second flute and amateur sleuth Emily Wilson is on the case, even after she becomes the prime suspect. Bowen is a former orchestral oboe and English horn player, so she knows whereof she writes.

A supernatural rom-com described as Chilling Adventures of Sabrina meets The L Word. Emmy Harlow returns to Thistle Grove for a spellcasting tournament, but finds herself swept up in something else entirely with her old friend Linden and her new friend Talia.

Wall Street Journal reporter Schwartzel takes a hard look at the role of the movie industry in the global economic struggle between the US and China, and what Hollywood will do to win that country’s vast box office. Read Bostonia’s interview with Schwartzel.

They Called Us Girls: Stories of Female Ambition from Suffrage to Mad Men
Cynren Press, 2022
By Kathleen Courtenay Stone (LAW’80)

Stone’s book is a “collective biography” of seven women born before 1935 who expanded the frontiers of employment for their gender after World War II, taking on jobs previously associated with men: doctor, lawyer, artist, physicist, executive director, and intelligence officer.