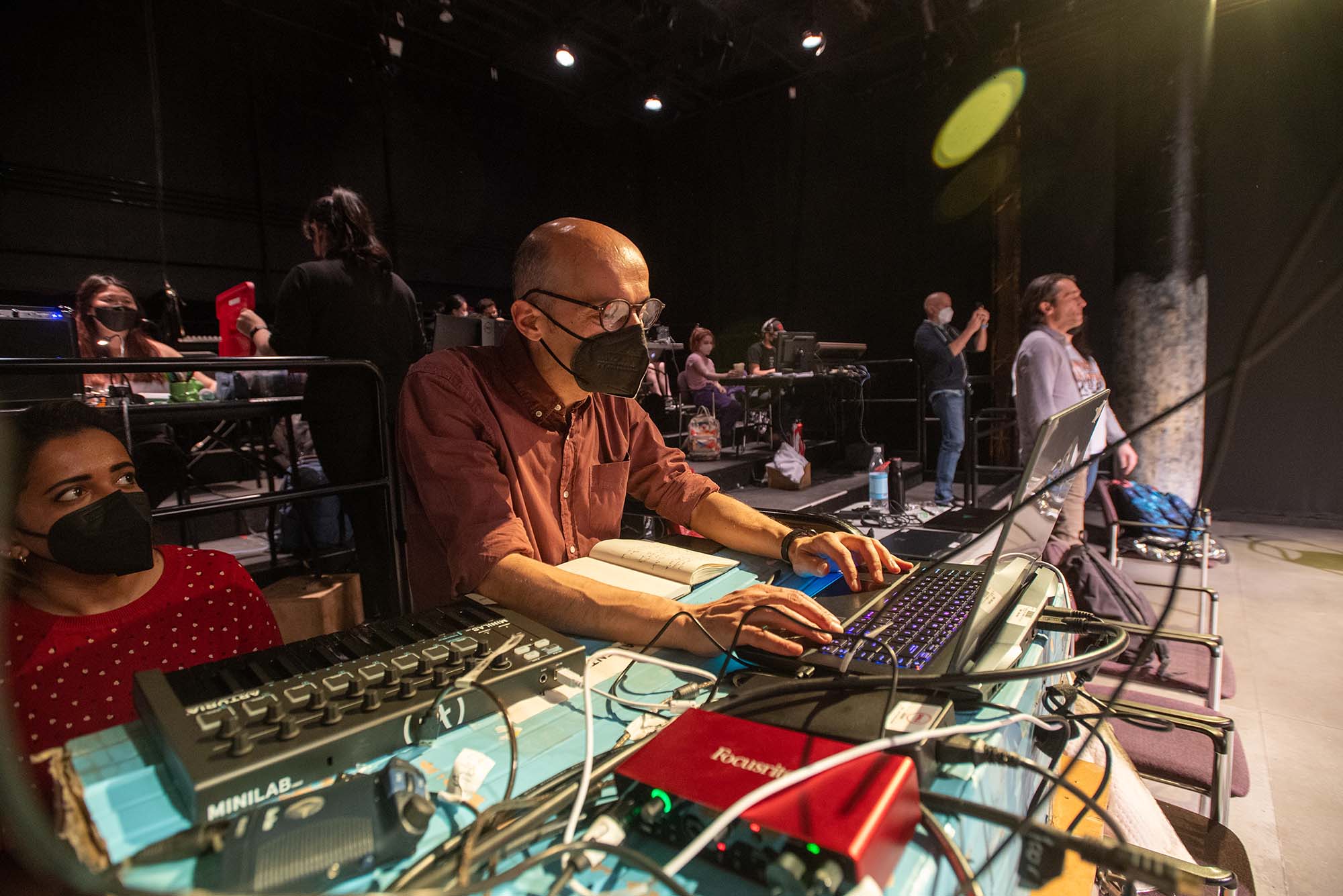 The cast and crew of Exit the King, with artist-in-residence Paolo Scoppola (center), run a tech rehearsal April 27 at CFA’s Studio One.

There will be two premieres at the College of Fine Arts on Wednesday night.

The School of Theatre production of Exit the King opens for a five-show run in Studio ONE. And the performance will mark the debut of Random Actor, a software tool for creating live, interactive stage projections that’s been in the making at BU for four years.

Written by Eugène Ionesco and translated by Donald Watson, Exit the King is the absurdist tale of King Berenger the First, whose empire has crumbled and whose life is coming to an end. As directed by Clay Hopper (CFA’05), a CFA senior lecturer in directing, this production will look different from anything you’ve ever seen.

Three motion detectors will capture data on Schliesmann’s movements on stage and feed that information to the Random Actor software, which in turn will give directions to another set of equipment that produces the projections. Random Actor will also use input from stage mics that capture the King’s voice. And the software will be operated by a graphic designer who can tweak the projections in real time.

This video, taken at rehearsals, gives a taste of what Random Actor’s projections will look like. Video by Bob Heim, Shipley Center for Digital Learning & Innovation

It’s easy to understand when you see it, much harder to explain. Basically the King will be accompanied around the stage by a retinue of tiny graphic objects projected on backdrop, floor, and the actor himself, a “particle system” that moves when he moves and seems to change in accord with his very state of being.

“The test is, does it reveal more about the play, or does it simply look like gift wrapping,” Hopper says.

“When I first heard about it, I couldn’t wrap my mind around what it was,” Schliesmann says. “Particle system? I don’t even know what that is, but I’m excited to find out,” he says he thought. “I was certain it was going to be a process unlike anything I’d done before.”

In technical rehearsals, the actor had to focus on the story in the traditional way, embodying the king’s mortal journey, while also remaining aware that Random Actor was using his movements to shape the projections around him. Just as an actor’s performance is slightly different every time, so are the projections.

“That’s been very challenging, but also incredibly rewarding,” Schliesmann says. “There are moments in the play where the particles go up my body and I can see them responding to my movements. I don’t need to imagine what’s happening to me because it’s all right there.

“It helps illustrate the whole story we’re trying to tell. And it becomes very beautiful toward the end, when the system doesn’t respond to me anymore,” he says.

Help from the Shipley Center and a visiting artist

Behind the theatrical project is a technical one, supported by the Shipley Center for Digital Learning & Innovation and driven by visiting artist Paolo Scoppola.

“The Random Actor project is our first collaboration with CFA, and a showpiece of the Shipley Center’s mission of enhancing the undergraduate experience at BU through the creative use of technology,” says Chris Dellarocas, associate provost for digital learning and innovation and Shipley Professor of Management at Questrom School of Business. “The project strengthens CFA’s ability to educate creative artists for a digital future.”

Random Actor began at a CFA meeting four years ago, where Hopper started talking about projections in theater with James Grady, BU Spark! creative director and a CFA assistant professor of art, graphic design. They agreed most projections were lacking, not integral to the production, “a TV with a play happening in front of it,” as Hopper says.

Instead, they wanted to create projections that were more about what was happening among the actors on stage, “so the environment could change to reflect the interior life of the characters,” Hopper says.

“I was talking about some of my research when I was at Rhode Island School of Design, where I was doing a lot of interactive, immersive, 4-D design,” Grady says.

Grady and Hopper worked on the idea together for a 2018 Hopper-directed production of 1984 at the School of Theatre, using an Xbox Kinect for motion capture. But making even the slightest change meant days of reprogramming.

“The goal has always been, how do we build a tool that doesn’t need people to recode it—that we can support so theater students can use it, designers can use it, and developers can build on top of it,” Grady says. “Clay and I have always been working with the passion of developing this so it can be used in the theater and only enhances the experience and doesn’t become some sort of mask over the performance.”

Grady took the idea to BU Spark! where students worked on it for several semesters, but eventually the project needed a veteran with both the software and the art chops to get it over the finish line. Hopper and Grady found Scoppola, who arrived for a four-month residency this semester, supported by a $55,000 grant from the Shipley Center.

“There’s an interactive and visual and artistic component to this project, which is a first for us, and we are thrilled to support that,” says Romy Ruukel, director of the Shipley Center. “It’s a fantastic collaboration between art and technology.”

“I was playing piano when I was a kid and doing drawings, and I was one of those kids in Italy who grew up trying to spread out their fantasies. It was the golden age of education,” he says with a laugh. As a university student, he studied computer science, and went to work as a virtual reality software engineer for a company in Italy that was creating the first interactive installations for art museums. Still playing piano, guitar, and violin on the side, he began doing music for documentaries and TV series.

“One night in Rome I saw an interactive experience with a large screen, and what was happening on the screen was depending on what the audience was doing,” he says. “And I thought, here is music, here there is images, here there is software—here are all the things I am able to do. And I say, this could be the way to combine all my interests.

“But I approach it from a different way. Here is a way to make art, not to do applications,” he says.

Now Scoppola’s website lists artwork, including installations, photography, music, drawing, and “brain drops,” a research project involving rehabilitation patients in Italy that mixes art and neurological research. He is perhaps best known for major public art installations and projections in public spaces in Italy and across Europe as well as for joint performances with musicians.

“He was always really involved and excited about this project based on the work he did,” Grady says. “I talk to Paolo about what is the design and technology that is happening and how that can be applied in the context of theater.”

Scoppola is writing what Hopper calls “bespoke software” for Random Actor and putting it to work on Exit the King. “It’s hard, because we’re building the software as we’re doing the show,” Hopper says with a chuckle.

“Especially for a live performance,” Grady says, “we don’t want to put anything out there that’s not totally bulletproof. It could crash, the light could go out, and we want to have backups and be very practical, even though it’s a very conceptual and technical thing. We want to make sure it just flat-out works.”

Random Actor also got a tryout in a movement class for fourth-year acting students taught by Yo-El Cassell, a CFA assistant professor of movement, resulting in a performance at the Howard Thurman Center for Common Ground.

It’s important to look at what happens beyond Exit the King, says Diane Carroll, Shipley Center project manager. “It will become a tool that can be used for other applications across the University, that’s what’s exciting,” Carroll says. “Clay’s using it in a theater performance and there’s a movement or dance performance and maybe someday someone will say they want to do projections on a building on Comm Ave. I just feel like in the next few months or the next year, there’s going to be something even more exciting coming. What do they want to do next?”

Ruukel says the Shipley Center would love to support more creative projects. To get started, faculty and staff can attend a May 17 information session or request a consultation.

CFA School of Theatre production of Eugene Ionesco’s absurdist exploration of ego and mortality, featuring projections by the new Random Actor software. Tickets are $20; free with BU ID at the door, subject to availability. (Two performances on May 7, 2 pm and 7 pm.)

Exit the King, and Enter Random Actor
0
share this