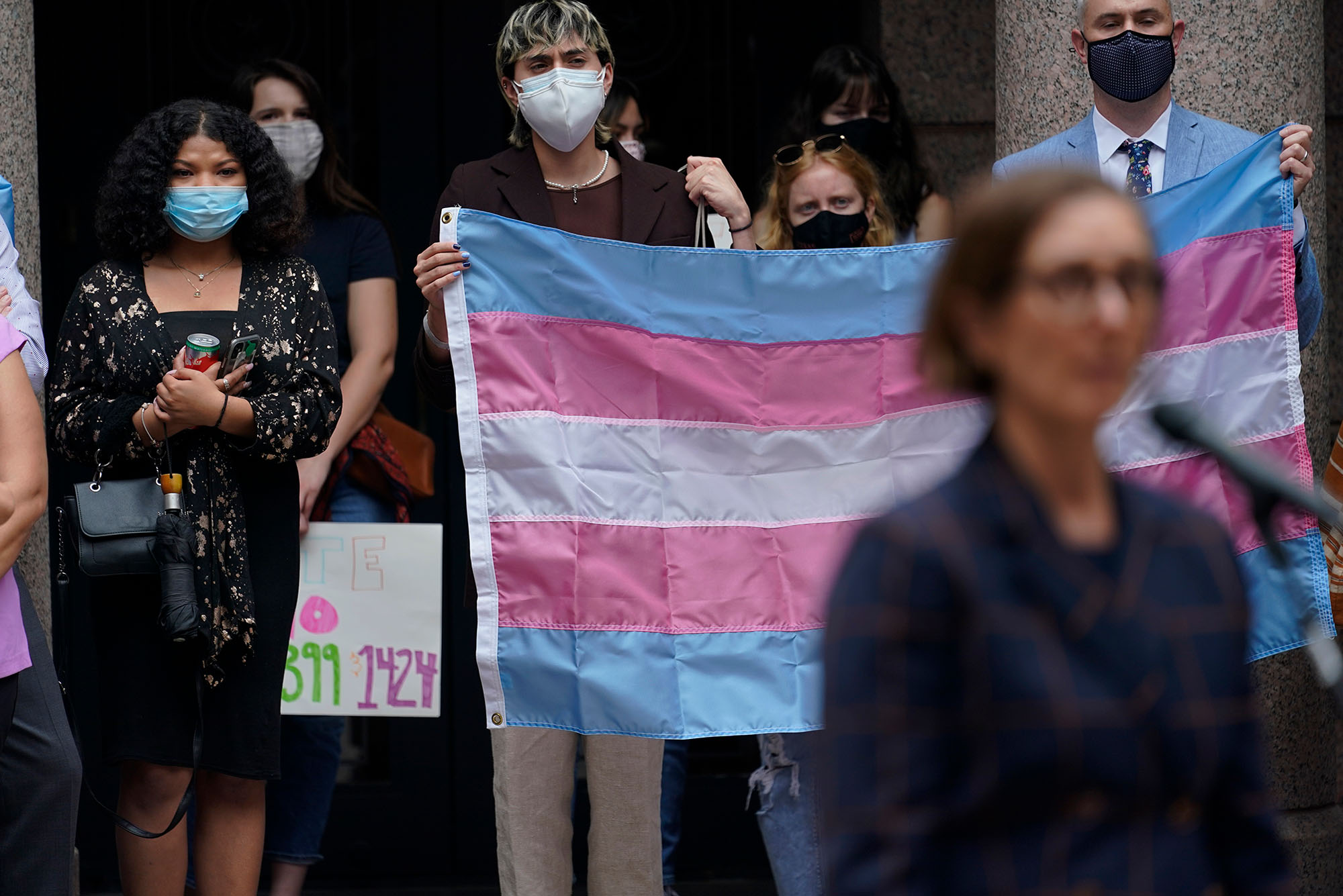 Supporters of transgender rights gather outside the Capitol Building in Texas last year. Texas Governor Greg Abbott’s newest directive is the latest in a slew of anti-trans measures the state has attempted to pass over the past few years. AP Photo/Eric Gay

The Texas Department of Family and Protective Services (DFPS) this week opened its first investigation into the family of a transgender teenager who received gender-affirming medical treatment under a new directive from Texas Governor Greg Abbott that has sparked a nationwide outcry and condemnation from President Biden.

It’s only the newest anti-transgender measure from Texas, which saw a record number of anti-trans bills introduced to the state’s House and Senate last year. And in January of this year, Senate Bill 29 went into effect, requiring transgender student-athletes to compete on sports teams that match their sex assigned at birth.

The latest directive comes in the form of a letter issued in late February to DFPS directing the agency to classify medical treatments for transgender adolescents—such as puberty blockers and hormone injections—as “child abuse” under existing state law. The letter calls for DFPS to investigate parents who help their children access such treatments, as well as licensed facilities that administer them. The letter also imposes penalties on any “mandatory reporters” like doctors, nurses, and teachers who don’t report instances of treatment to the agency, as well as on members of the general public.

The letter is the follow-up to a legal opinion Texas Attorney General Ken Paxton released a few days prior, defining such procedures as child abuse and labeling gender-reassignment surgeries as “forced sterilization,” among other claims.

If you’re wondering, is that all legal? you’re not alone. The American Academy of Pediatrics and the American Medical Association, among many other groups, have released statements condemning states like Texas for attempting to block transgender youth from accessing medical treatment. Following Abbott’s letter, multiple district attorneys throughout Texas stated that they would not be investigating parents or medical providers and the US Department of Health and Human Services announced it would work to protect the rights of transgender children in Texas.

Biden mentioned the Texas effort in his State of the Union speech Tuesday, and in a statement Wednesday, said: “Transgender children bring fulfillment to their parents, joy to their friends, and are made in the image of God. Affirming a transgender child’s identity is one of the best things a parent, teacher, or doctor can do to help keep children from harm, and parents who love and affirm their children should be applauded and supported, not threatened, investigated, or stigmatized.”

Once the first Texas investigation into a family was announced, the ACLU immediately filed a lawsuit on behalf of the teenager and their parents, as well as Texas physician Megan Mooney, arguing that Abbott’s directive has no legal basis and is instead an attempt to “endanger the health and wellbeing of transgender youth in Texas by depriving them of medically necessary care.” On Thursday, a Texas judge blocked the particular DFPS investigation from taking place, but not investigations in general. On March 11, a court will decide whether or not to block Abbott’s directive statewide.

To shed some light on the situation—and what directives like the Texas one could mean for the transgender community—BU Today tapped three Boston University experts. Linda McClain, School of Law Robert Kent Professor of Law, is an expert on civil rights and gender law. Melissa K. Holt, a Wheelock College of Education & Human Development associate professor and associate dean for faculty affairs, has spent years researching gender and sexual identity in adolescents, and is currently coleading a study focused on transgender and nonbinary youth. Finally, Debbie Bazarsky, inaugural director of the LGBTQIA+ Center for Faculty & Staff, is a nationally recognized leader and lecturer on LGBTQIA+ topics and the field of diversity, equity, and inclusion.

The interviews have been condensed and edited for clarity.

BU Today: First of all, does Governor Abbott’s directive appear to be legal?

It does not seem to be legal. As the complaint explains, the governor doesn’t get to declare what child abuse is in Texas—that has to come from the state legislature, who then may delegate a body or individual to write regulations. Therefore, the complaint says that Abbott’s directive violates the Administrative Procedure Act, because it didn’t go through the proper channels of lawmaking. The complaint uses the phrase ultra vires [to classify Abbott’s actions], which in legal terms means acting outside of one’s scope of authority.

BU Today: When do children develop an awareness of their gender identity, and what is gender dysphoria?

Holt: Around age three kids typically have an awareness of gender and can identify their own gender. It’s also around three to five that kids may start having a sense of their assigned gender not aligning with how they perceive their gender. So, it can happen very early for some kids. At the same time, there are a lot of factors—such as familial expectations and societal norms—that can act as barriers and lead to individuals identifying as transgender or gender-diverse at an older age. There’s a lot of variability, particularly for people who identify as gender-diverse and may have many reasons why it feels more complicated for them to express their own gender identity.

Essentially, gender dysphoria is when your assigned gender identity doesn’t align with your actual gender identity. Historically, gender dysphoria has been characterized by the American Psychological Association as a mental illness, which is no longer the case. Now, it’s characterized as a “marked incongruence between one’s experienced/expressed gender” that is causing an individual distress lasting at least six months and meets certain other criteria. Experiencing gender dysphoria is a critical component when someone is considering receiving gender-affirming medical care. That’s what a treatment team will be looking out for: Is this person experiencing gender dysphoria?

BU Today: Abbott’s, and particularly Paxton’s, literature appear to liken gender-transitioning treatment for adolescents to forced “sterilization” and mutilation of “otherwise healthy body parts.” What does gender-affirming care for children and teenagers actually look like?

Holt: Prior to the onset of puberty, kids typically receive nonmedical care. Their care is focused around social transitioning [like choosing a new name and changing how they dress] and providing mental health and structural support, like schools using a child’s preferred gender pronouns and allowing them to use the bathroom that aligns with their gender identity. Later on, an adolescent can pursue the more medical aspects of gender-affirming care, such as puberty blockers and hormone injections, and so on. [And note that current medical guidelines say individuals should not undergo genital reassignment surgery until the age of 18.]

These writings are not providing all the facts around what gender-affirming care looks like for children and teenagers from a medical perspective. There are no four-year-olds going through irreversible medical procedures. [For treatments like hormone injections and chest surgeries], these are thoughtful decisions made after a long period of time when kids are well into their teenage years; often, these are kids who have socially transitioned for quite a long time, and they and their families are making additional choices to support their well-being.

There’s so much research showing that adolescents who receive gender-affirming care and have supportive families and school structures fare so much better than adolescents who don’t. The rates of psychological distress, suicidal ideation, and attempted suicide go down, as do the rates of depression. Both the American Psychological Association and the Society for Research in Child Development have released statements [saying as much]. That’s why Abbott’s directive feels very counter to scientific evidence—all indicators suggest that medically gender-affirming care is beneficial, and not having access to that care impacts the well-being of transgender children in significant ways.

BU Today: What kind of message do measures like this send to the transgender community?

Bazarsky: The very notion that trans kids and their families are at risk of facing legal ramifications and charges of child abuse for supporting their trans family members is barbaric and goes against the evidence-based, gender-affirming medical guidance from numerous national medical organizations. These parents are not being abusive; the law is abusive. Directives like this, and the anti-trans rhetoric around them, send the false and damaging message to trans people and their families that their very existence is invalid. With trans youth already experiencing stigma and discrimination and higher rates of depression, self-harm, and homelessness, among other things, directives like this have the very real potential to hurt trans kids in myriad ways and increase these rates.

BU Today: How can cisgender people be allies to the transgender and gender-diverse community?

Bazarsky: In addition to this bill, Texas and more than 20 other states have introduced legislation that would ban gender-affirming medical treatment for adolescents. This makes the passage of the Equality Act, or other federal protections, all that more essential. Advocacy, such as reaching out to elected officials, supporting organizations who are fighting these anti-trans bills in court and those who support trans and nonbinary people—these are small, yet meaningful, ways people can offer support.

If you have transgender individuals in your life, it is about showing up and offering support, validating their lived experience, honoring their lived name and pronouns by never deadnaming or misgendering them, never outing them without their explicit consent, educating oneself about trans and nonbinary identities and cissexism rather than asking trans people to educate you. Also, not asking invasive questions, being a visible and active ally, and asking trans and nonbinary family members and close friends in your life if there are things you can do to better show them safety, love, and support.