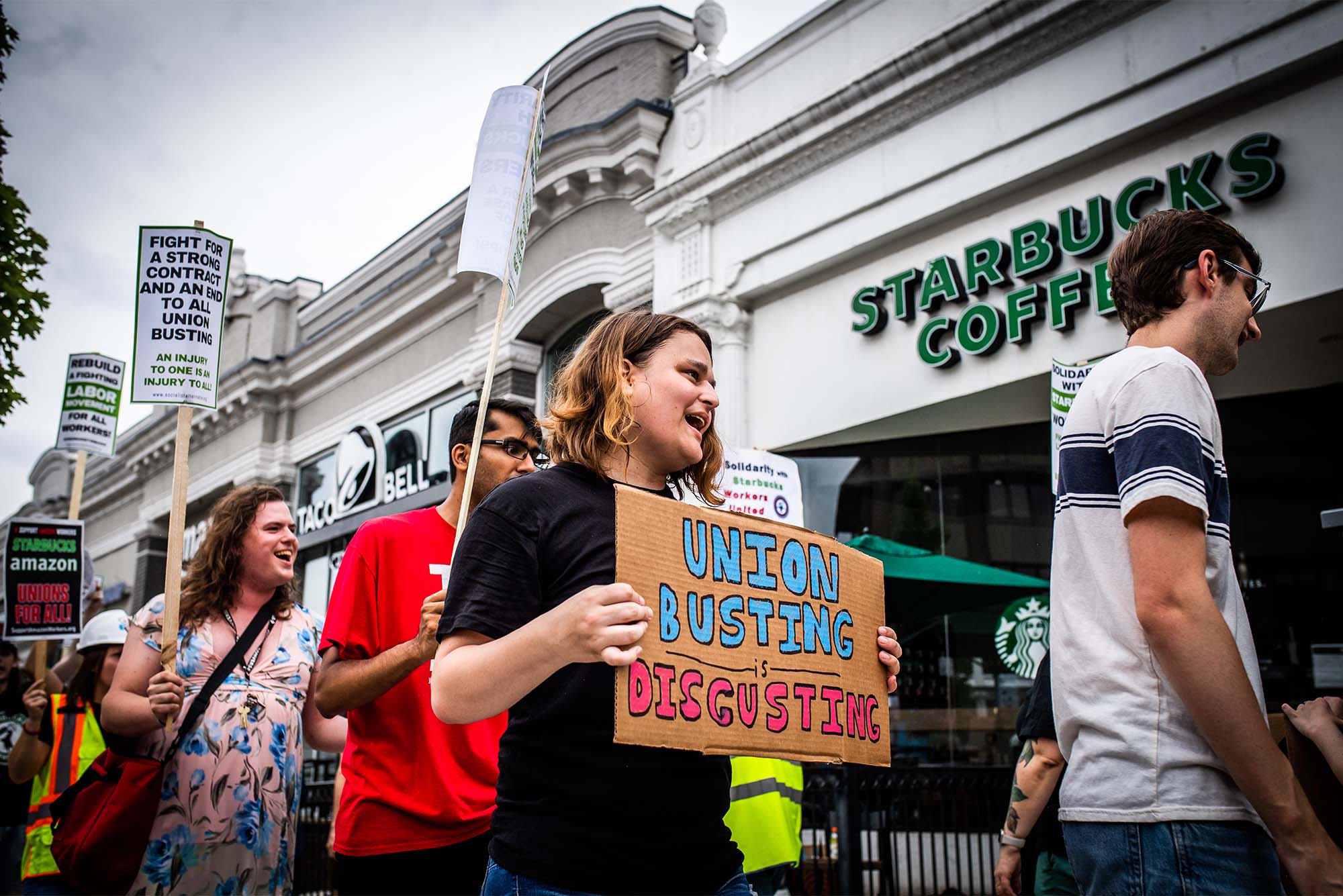 Starbucks employees picketing outside the store location on Comm Ave on July 18, 2022. They alleged that an interim store manager hired after last month’s vote to unionize had contributed to a “hostile work environment.”

Is America’s Labor Movement on the Upswing?

We asked LAW’s David Webber about union activity, from Amazon to Starbucks

Workers struck Starbucks on Comm Ave for more than two months and others are trying to unionize Amazon warehouses nationwide. Railroad employees were so close to a strike that US Secretary of Labor Marty Walsh intervened to keep the freight—and the entire US economy—moving, but now some of those workers are threatening again.

The American labor movement seems resurgent, at a time when pandemic-weary employees are battling their bosses over work-from-home policies and thinking of “quiet quitting.”

We asked David H. Webber, a School of Law professor of law and Paul M. Siskind Scholar, to sort it out. Webber is the author of The Rise of the Working-Class Shareholder: Labor’s Last Best Weapon.

“There’s a lot of different things that are going on, culturally, economically, and politically, that I think have the wind at [labor’s] back in a way that hasn’t happened in decades,” Webber says.

BU Today: It seems like the labor movement is having a moment, or maybe more than that…?

Webber: Yes, there is a significant shift that’s going on right now. Unions have not been this popular since the mid-1960s. Workers and worker issues poll very popular today. More Americans support doing more for workers than almost any other comparable political issue that you can think of. There is a moment right now, and I think it’s a meeting of many different things going on at the same time.

One, I think, is the aftermath of the pandemic, the sense that frontline workers really took the brunt of the pandemic, and kept the economy going, kept society going through a very dark time. And that has earned them more support from the public, and I think it has also brought in a new level of assertiveness, a new sense of how now workers can be exploited, and how they need to stand up for themselves, to push back. I think that it’s culturally more acceptable to do that now.

There’s not exactly a Cold War going on, or if it is it doesn’t have the same political or ideological [impact] that it did for a prior generation. I think that there is a lot of polling about millennial and Gen Z attitudes on these questions that show that their views differ quite sharply from those of Gen X and baby boomers, from the idea of taking your politics to work to how you shop to your place of employment and so forth.

To some extent, workers have really been pushed to the wall from decades of legal hostility and political hostility, to the point where more and more they feel that they’ve really got nothing to lose and should take a chance—you know, push back.

I would also say that this is this inflationary moment. There’s a lot of demand for labor and this has strengthened labor’s hand.

BU Today: You mentioned a change in the perception of the labor movement, the old lefty idea?

Webber: For a long time, for decades in this country, if you go back to a certain Cold War framing of the ideological battles between the capitalist West and communists, the Soviet bloc, there was a lot more cultural and ideological hostility to labor unions. There was red-baiting. There were all those kinds of issues going on, and today that dynamic is not present in the way that it once was.

I think that when people look at workers who are trying to just, you know, argue for basic working conditions, basic decent wages and benefits, it’s sapped what once looked like something much more ideologically hostile to the US system. And so I think that that has disappeared, that kind of rhetoric and hostility in the popular imagination and in the political culture. And so I think that there’s more room for labor organizing and worker organizing to take place today.

This is also reflected in Gen Z. If, for example, the majority of millennials voted for Bernie Sanders in the Democratic primary, these ideas are becoming more popular with the newer, younger generation, and I think that they’re the ones who are leading the charge if you look at places like Starbucks, you look at places like Amazon. This is a new, younger generation stepping up and engaging in this kind of pro-labor activism. Sometimes you just need a new generation to come along for these ideas to shift.

BU Today: Another baseline difference for some years now is the gig economy. How are people’s feelings about that affecting the labor situation?

Webber: I think that there is increasing awareness that it was sold as freedom and liberty—that the so-called gig economy was marketed in this kind of sexy way that, oh, you know, you can work a little here and work a little there, and pick up a few extra bucks, driving a car or delivering food, whatever it may be, and it was kind of branded as a lifestyle choice.

I think now, a few years into this gig economy experiment, what we see is that it’s long hours, crappy pay, and no safety net—few, or often without, health benefits, or without many of the retirement benefits. We also see that the way the gig economy has decimated certain fields [such as cab drivers]. We see now that the gig economy jobs themselves aren’t that great, and that in many instances they replace jobs that were better.

BU Today: You connect this with the millennials who have many of those gig economy jobs…

Webber: They lived through this huge financial crisis of 2008, and then COVID, and there’s serious concern about future economic prospects. That sort of plays into the whole “they’re gonna be the first generation that is worse off than their parents” idea. And I think when you tie that in with concerns about climate change, what you get is some pretty different political and social attitudes from prior generations. And, yes, less trust of the institutions, and more desire to build worker organizations, to build some solidarity to challenge existing arrangements in any number of ways.

BU Today: Could you talk a little more about the pandemic effect, and to what extent some of these changes are just symptoms of the last two years of, frankly, chaos in the working world, versus an overall power shift between employees and bosses? The whole work-from-home issue, for example, and so-called quiet quitting.

Webber: I think we’re talking about different segments of the market. So, if you are a trucker, if you work on the railroads, if you work as a barista, if you work for Amazon delivering products, if you’re truly a frontline worker, then working from home is not an option. Zoom work is an option for many people in our society, but it is not an option for many of the people where we’re seeing the greatest focus of labor activism, right? And that itself, I think, is telling, because, again, all of those jobs that I just enumerated are the ones where we see the most labor activism. There isn’t a work-from-home alternative—they’re there together, working together in the same space day in, day out.

It’s actually interesting. Now that we’re talking about it, I’m wondering to what extent just being present with each other is something that enables people to work together better and kind of do the sort of collective common good interest thing that is required to push for a labor union. Even to just start talking about it.

The combination of COVID with who gets to avoid COVID by working from home, and who has to put on a face mask and suck it up and bear the risk—you trace out those different groups of people, and you can learn a lot about who’s really got the moment on labor organizing, and who’s maybe a little bit more content with where they are. So, yeah, for that reason I think COVID just accelerated trends that were already existing.

BU Today: It used to be that the average CEO got 10 times the average worker’s pay and now they get 500 times, or whatever the statistic is. There’s a lot of coverage of Jeff Bezos and Elon Musk and other billionaires, and how wide that wealth gap has grown. Is that also making people more active?

Webber: One hundred percent. I think that economic inequality is the great existential question of our time. Or I guess the two would be economic inequality and climate change. I think there’s just growing recognition that legal democracy without economic democracy is not democracy. Obviously you have civil rights and the right to vote, that’s extremely important. But some people have enormous power through economic power to shape political and regulatory agendas, and the rest of us don’t. And I think that this is clearly seen and understood by the public in a way that has not been true in a long time.

And I think also, by the way, that it’s gotten worse, as you just pointed to.

One of the reasons why we’ve even seen a rise in shareholder activism, even by worker pitch funds and others, is if you go back to the ’80s, the ’90s, there was this cult of the superstar CEO. And along comes the financial crisis of 2008. And what do we see? Huge pay packages for CEOs who drove their companies into the ground, this total disconnect between what they were paid and company performance.

I think this view of the superstar CEO as an important leader, increasingly, has just been met with widespread skepticism, that actually these people aren’t great leaders, they’re just self-serving and working the system to pay themselves very, very, very well. So I think there’s a sense of a strong desire to take back control.

Is America’s Labor Movement on the Upswing?

Is America’s Labor Movement on the Upswing?
0
share this