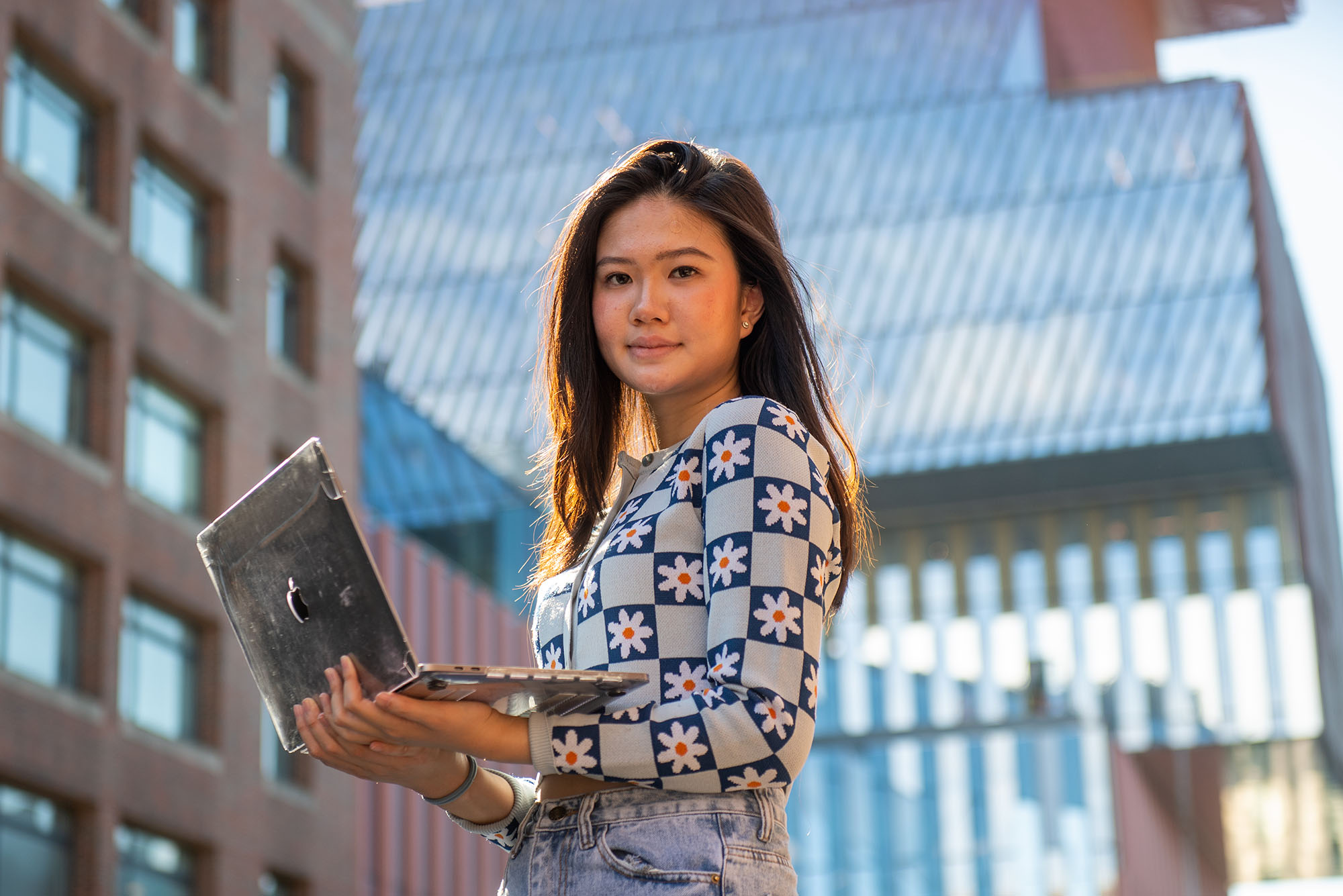 Computing and data science major Selina Manua (CDS’26) aims to blend her coding skills with her concern for equality in education while at BU. Photo by Cydney Scott

Working for educational equality in Indonesia since sixth grade

A quick snapshot of the Class of 2026, the highest achieving and most diverse class in BU history: of the 3,620 entering freshmen, 19.4 percent are first-generation students and 21.2 percent are from underrepresented groups. They hail from 47 states (with Mississippi, West Virginia, and North Dakota the exceptions) and 65 countries and regions (23 percent are international students). The class is 59 percent female, 41 percent male, and has an average GPA of 3.9 percent.

But those are just numbers. To give you a better sense of just how accomplished the Class of 2026 is, this week we introduce four students who share their inspiring stories.

Many students find their involvement in activism and commitment to social justice ratchets up when they get to college. For Selina Manua, growing up in Jakarta, Indonesia, it started in sixth grade.

A family friend shared a news report about a bare-bones one-room school serving the children of a shantytown under a toll bridge. The school was set to be demolished for a public works project, and adults were moving—successfully in the end—to save it. But Manua (CDS’26) asked her mother to take her there, a 30-minute drive from their home, to see the school for herself. When she did, she volunteered to teach math to the children, who were only a few years younger than her, on Saturdays.

But she wanted to do more for the school’s 60 students, boys and girls ages 6 to 10.

“I was shocked about the conditions they were in,” Manua says. “There was no [insulation] so it was very hot and there was water dripping from the roof, the children had to sit on the floor all the time, and it was poorly lit.

“I was in schools that had nice facilities, so I decided to help them have better conditions, because we need to have equality,” she says. “That’s when I started a group called Reading Train.”

Manua’s parents, who encourage her giving back, work in real estate development, so she lived in a nicer part of the city and knew people and companies that could help. She set about raising money, collecting in-kind donations, such as furniture, and selling T-shirts. In six months, she collected the equivalent of $10,000, along with in-kind donations to the school, called Sekolah Anak Kolong Tol Jembatan Tiga.

“There’s no official translation for the school name, but if it were to be translated, it would be School for Children under the Toll Bridge,” Manua says. It sounds sadly Dickensian, but there is a bit of a happy ending.

“We raised enough funds to renovate the school and make it a better place for the children and also renovate the small building next to it so they will have, like, a mini-library,” she says. “We fixed the roof, we painted the walls, we bought new bookshelves, desks and chairs, and insulation and fans, and fixed the floor because the tiles were all broken.”

She is still involved with the school, and even wrote and published a reading primer for the students. She continued to teach there on Saturdays, when the students all get a free lunch and are sometimes treated to special events, like a magician.

She won’t be there this fall, though. Manua arrived at BU a few days ago and hopes to continue working toward educational equity for women and underserved populations while here. She is a Presidential Scholar and is joining the inaugural class of data science majors in the new Faculty of Computing & Data Sciences.

Reading Train was hardly her only prosocial activity back home though.

Manua attended the same K-12 school through her high school freshman year, and STEM was a major focus there. “That’s where my interest really blossomed,” she says. “There were a lot of math olympiads and competitions, and our teachers really supported us in learning about science and performing experiments.”

As a freshman, she studied writing computer code and found her (other) calling. “The reason is, coding is more logic-based, and there are a multitude of ways to get the same outcome,” she says. “It just depends on how you think and how your logic flows.”

When she changed schools after freshman year, she formed sheSTEM, an all-female club, because of what she saw among poor girls in the shantytown school and others where she volunteered.

“Since they’re raised in a more traditional setting, they’re engineered to think that science or STEM is a scary thing for women,” she says. “They haven’t been exposed to the modern thinking that science is for everyone. That’s when I realized we need more inclusivity in STEM, especially for women.”

The club, which has about 20 members, organizes events for schools and other nonprofit groups, such as an introduction to the history of women Nobel Prize winners in science and an actual visit to the shantytown school from a woman scientist who conducted an experiment with the kids.

I was in schools that had nice facilities, so I decided to help them have better conditions, because we need to have equality.

“Afterward a lot of them said, ‘Oh, this is so fun,’ especially hearing from the guest talking about what she does as a woman in STEM,” Manua says. She hopes the students will “realize that STEM shouldn’t be for just a single gender, but for everyone in the world.”

Manua strongly believes that a good education is for everyone in the world, and she’s set about working to help other students. “One of the problems in that school was that the parents are illiterate,” she says. “Literacy to me is everything—you need it for every job in life. And in the bigger cities, people at least have access to some education, but in rural villages that privilege is taken away. A lot of places do not even have proper schools because of problems like land scarcity and lack of teachers.”

So she launched Roda Belajar (in English, Learning Wheels), a plan to create a mobile school that can travel to remote villages with a teacher on board, providing an education that would not otherwise be available. She envisions a classroom inside a bus that will travel to two or three towns a day—younger kids, she notes, have short attention spans—to provide a few hours of lessons, repeating the route daily. Manua has already designed the bus, she says, and is talking to the Ministry of Education about her idea in hopes of getting it up and running next year, when she is home for the summer.

She also put her nascent programming skills to work on the project.

“We need data to identify which areas need the mobile school the most,” she says. “I looked at data from the Ministry of Education on things like student-teacher ratio and found the places where it was the worst. And I made a route using algorithmic optimization with the data to find out where the mobile school should go first and where it should end.”

She does have interests outside STEM and education, including playing tennis and cooking Japanese and Korean food. Her older sister attends the University of Washington, and when Manua was asked why she chose BU, she points to the multitude of student organizations she can get involved in.

But the most essential reason Manua came here connects to her major: it’s the new Center for Computing & Data Sciences, rising 19 stories above Commonwealth Avenue, which is set to open in December.

“That they dedicated a whole new building to computing and data science really sparked my interest, because that’s where my passion lies,” she says. “By building that building, they really showed that they are ready to invest in the field, and that it’s going to be one of their main focuses. That looks like the best building at BU.”

Introducing the Class of 2026: Natalia Sawicka

There is 1 comment on Introducing the Class of 2026: Selina Manua