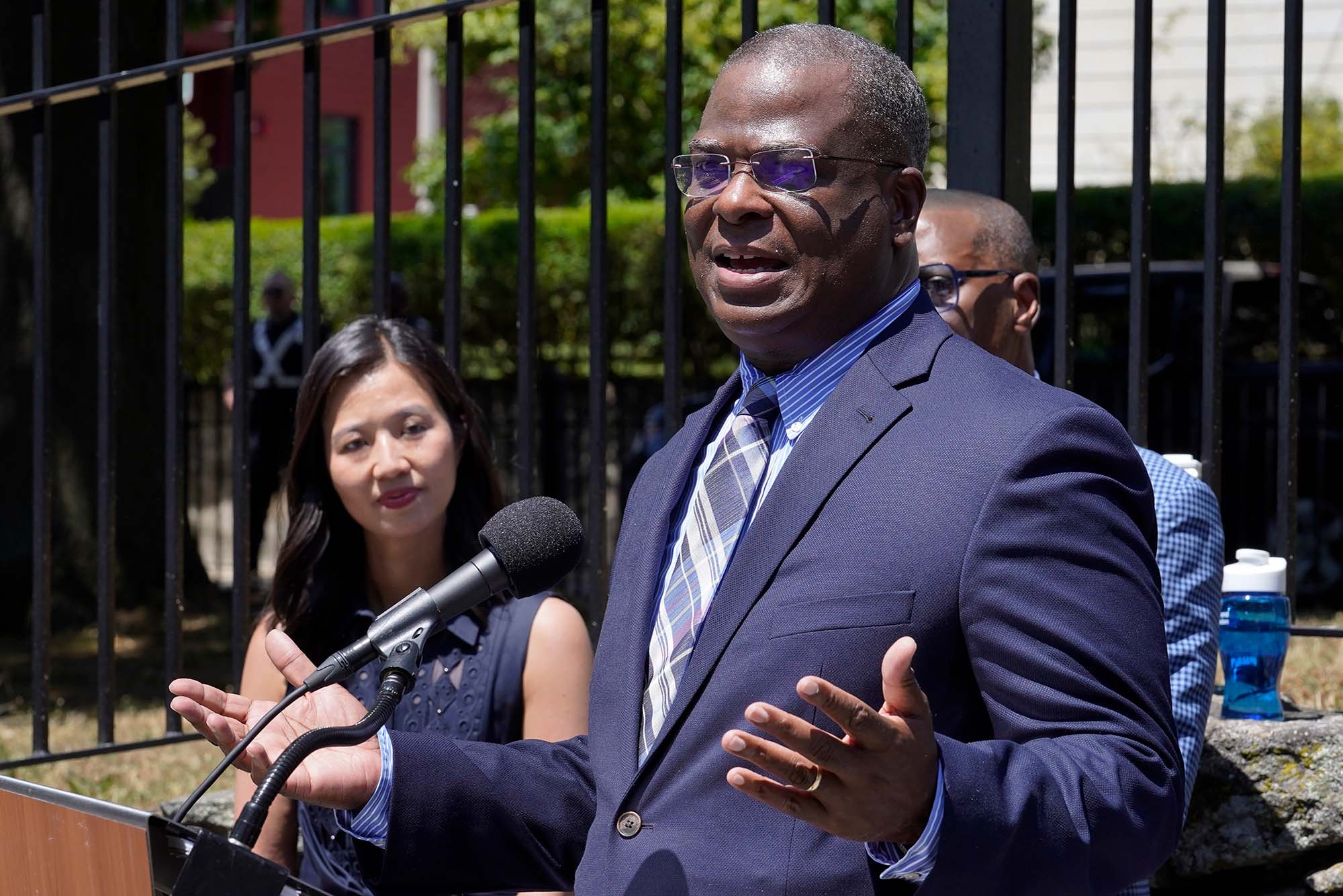 New Boston Police Commissioner Michael Cox (Questrom’18) (center), with Boston Mayor Michelle Wu at a press conference announcing his appointment, will lead a department emerging from scandals and needing to build trust with communities of color. Photo by AP/Steven Senne

“Victim of BPD is new police commissioner,” Axios Boston headlined last week’s report that Michael Cox had been named Boston’s new police commissioner. Cox, a career cop, who takes over August 15, was beaten and knocked out by fellow officers in 1995, mistaken for a murder suspect while working undercover for the department’s gang unit.

“We’re going to do community policing in a way we haven’t done it in a number of years,” Cox said at the July 13 news conference announcing his appointment. “It needs to start with me and our command staff, going to locations, doing peace walks again, things we did prior to COVID to build trust in the neighborhoods so people get to see us, so they get to know some of these officers before an incident happens.”

Cox left Boston in 2019 after 30 years with the BPD to become police chief of Ann Arbor, Mich., and is returning now to Beantown to take the commissioner position. Unlike many other cities, Boston saw violent and property crimes decrease during COVID-19, except for a surge in domestic abuse during the state’s stay-at-home advisory early in the pandemic. Against that background, some commentators ask whether Cox can reform a Boston police culture he’d worked in for so long.

We put that question and others to Shea Cronin, a Metropolitan College assistant professor and chair of applied social sciences, an expert on crime policy and administration.

BU Today: Activists and Mayor Wu are demanding reform, especially in addressing the distrust of police by Bostonians of color. What specific steps should he take?

Shea Cronin: One is that he should make it explicit that when they make decisions about implementing strategy or enforcement activity, they are putting front and center the disparate impact on communities of color in how they make those decisions. They need to put data about disparities in traffic stops, pedestrian stops, interactions with the public as part of that meeting. Right now, they’ll know how many guns they’ve pulled, what the crime rate is, but they won’t have, in the same conversation, that impact.

The second big thing is to open the agency to direct, community-based oversight. We have in Boston the new oversight board out of the mayor’s office, but what we really need is having neighborhood organizations in the room with police commanders, helping to make decisions. It’s having representatives of the people who are going to receive those strategies have some authority about what police in those neighborhoods are actually doing. There could be some veto power over that decision—I would be an advocate for them having some decision-making authority—but at the very least, they can review, they can be in the room to express disapproval, they can help problem-solve, and they can more effectively constrain when the police are going down a road that is incompatible with the way it should be done in their own community.

BU Today: The BPD has had recent scandals, including officers’ guilty pleas to overtime fraud and prison for a longtime police union leader who sexually abused children. What steps should Cox take to change department culture, and can he sell reform to what’s been called a famously hidebound PD?

Shea Cronin: Police departments are not so resistant to change as you would think in some ways, and in others very much so. When it comes to officers engaging in misconduct, we’re talking about good accountability systems. To change the culture, the first step is for him to appeal to their professionalism. They are well-paid, educated officers; he should be appealing to what it means to be a police officer in a multicultural, democratic society. You have responsibility, first and foremost, to obey the law, be responsive to the community, to treat people fairly and with dignity and respect. Officers might be feeling, there’s a lot of criticism of us; but maybe there’s not enough accountability.

The department really needs a strong leader, right now, who can take a new step in policing in a fair, effective way.

BU Today: Can he do that in the midst of the current defund-the-police movement?

That’s the message any police [commissioner] should lead with. They have a lot of misinformation that’s been fed to them about, say, Black Lives Matter. But universally, when you talk to officers, they tell you they’re in the profession because they see it as a noble profession, to give back to the community. That’s something that should be used as a tool to convince agencies that this is what you’re here for. How effective will that be? I don’t know, but I don’t know any other way to do it.

BU Today: Can a man steeped in Boston’s police culture be open to reforming it?

There is a true benefit of having somebody with some level of outside experience coming into the organization. There were a series of commissioners who were within the organization, understood Boston well, understood the internal dynamics of the department well, and worked within that framework well. But having somebody who has an outside perspective and bringing a fresh set of eyes onto these reform problems within Boston would be a good place.

BU Today: As a Questrom graduate (Cox graduated from the Executive MBA program), will he find his business school education useful as commissioner?

It comes back to a period of time in police scholarship where being a manager within a police organization is no different than running a private industry. There are a lot of skills that come out of an MBA that would be helpful, especially operating or leading the department on a day-to-day basis. It’s more common for folks to have a master’s degree in public administration that covers the unique aspects of [being] a leader within a public agency.

It goes back to what I was saying: if you’re in the room and you’re only caring about the crime rate going down at any cost, and you’re ignoring the other values imposed on you as a police agency in a democratic government, then you are not going to do the job well. There are many parts of an MBA that would make a ton of sense for running the organization, so long as you recognize the distinction between a private firm and a public organization. He’s been in that [police] world for his entire career, so I do think he can make the translation.

This is an absolutely crucial time for the Boston Police Department. They have been, on the one hand, heralded as an organization that has avoided accountability problems, and on the other hand, they have criticism around overtime and other things. The department really needs a strong leader, right now, who can take a new step in policing in a fair, effective way. Selecting any police commissioner is a gamble. Mayors are heavily tied to their police commissioners.