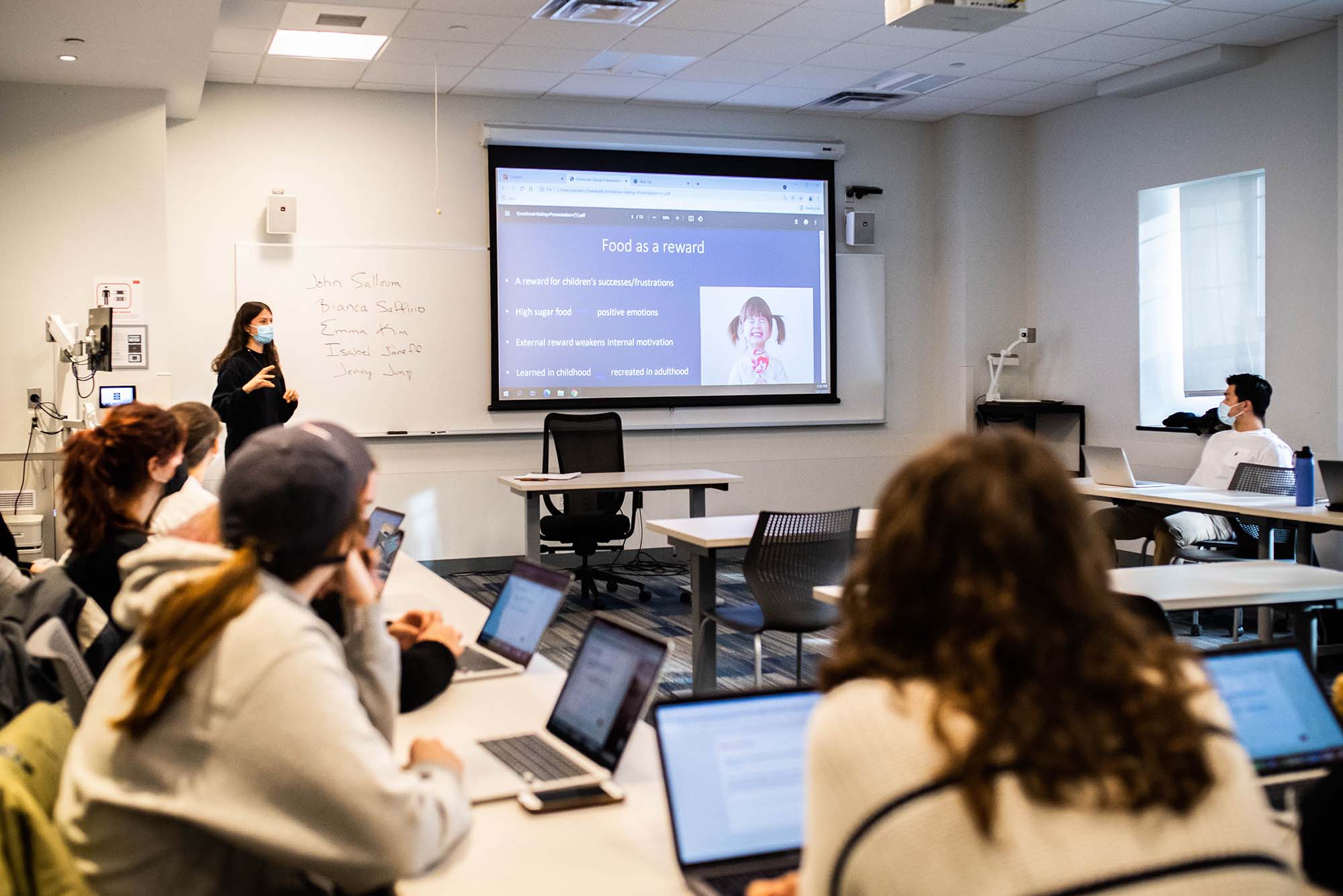 Bianca Saffiro (CAS’24) presents her final project, “Eating and Psyche: Food as Emotional Compensation,” to the class on December 1.

Writing with a Sense of Taste

In CAS seminar, what students’ final projects serve up ranges from the history of pizza to cooking in video games

Few undergraduates can cite tasting chocolate and cheeses, sniffing spices, and scoffing down a $1 oyster among their assignments this semester. But in Jamie Robertson’s College of Arts & Sciences seminar Writing with a Sense of Taste, these sensory activities are fundamental to the process of learning how to reflect and write.

With its emphasis on critical reading, research, and expression through both written and digital media, students in Robertson’s seminar sample everything from longtime Los Angeles Times food critic Jonathan Gold’s reviews to revered food writer M. F. K. Fisher’s avant-garde, imaginative prose to ​​Anthony Bourdain’s Emmy-winning TV show Parts Unknown to, well, potato chips, for an exercise in taste and memory association. Throughout the semester, students also complete journal assignments, such as visiting a café and recording observations using all five senses, writing a critique of their dinner as if they were a food critic, and reacting to Fisher’s anecdotes and witticisms in her classic work, Consider the Oyster (1941). These explorations in genre and style culminate in a final multimedia presentation on a food-related topic chosen by the student, with the option of crafting a video, a website, a podcast, or a good old-fashioned powerpoint presentation suitably geared towards a critical audience.

Although the oyster assignment was not an option this term because of the pandemic’s ongoing effect on local restaurants, Robertson is glad to be teaching the seminar in person again, after COVID forced the class online in March 2020. “I was feeling, even before COVID, that we needed more human connectivity,” says Robertson, who also teaches a seminar on literature and law. “Of course eating has its own politics, but food is a way to connect people, and writing is also a way to connect people.”

This idea resonated with many of her students, including Emma Kim (CAS’24), who says the subject matter was a welcome departure from her STEM coursework. She particularly enjoyed the restaurant review assignment: “Writing the review was different from what I had imagined,” she says. “It was fun trying to come up with specific words to make the reader have the same experiences as when I was sitting in the restaurant.” Kim, however, landed on a more serious topic for her final video project, which weighs the pros and cons, including the environmental impact, of conveyor belt sushi restaurants globally.

International relations major Jelena Garcevic (Pardee’24) says the seminar was “a really good way to practice my creative writing,” and an opportunity  over Thanksgiving break to bond with her family and neighbors, who helped her film her final project on paella (their version featured fish, shrimp, and turkey). One of her favorite in-class assignments was a sensory exercise that involved smelling an unidentified spice and writing about a memory associated with the smell. “I smelled clove,” says Garcevic, who was born in Vienna, Austria, “and I wrote about how it brought back a memory of me being a child at a Christmas market.”

While sensory activities were understandably popular, students diverged in their love—or loathing—for Fisher and Bourdain’s distinctive voices. Coming into the class, most of them had never heard of Fisher, and “only a few were familiar with Anthony Bourdain,” says Robertson. “And he’s interesting, because they either really like him, or really don’t. But, what I always ask is, ‘Did your mind wander? Did you stay engaged? And every time they’re like, ‘Yah.’ That’s my point with his writing: your writing has to compete for people’s attention and keep it. You may not like him, but you can learn something from him.”

A fan of Bourdain’s work, Massimo Siracusano (ENG’24) says the seminar changed his view on both food and writing. “People treat food like it’s a necessity, because everyone needs to eat,” says Siracusano, “but I never really thought about how to describe food as a holistic experience.” As an engineering student, he says, he appreciates the expressionic aspect of both the readings and writing assignments. “Writing about something I was passionate about definitely helped and motivated me. It was the first time in a long time that I genuinely enjoyed the learning process.”

Why did the first-generation Sicilian from New York City choose the history of pizza as the subject of his final project? “I was thinking about Italy a lot this semester,” he says, “but I also wanted something that had a great overarching story. Everyone knows pizza, so I figured it’d be a great story to tell how it gained international acclaim, where it’s now the most eaten food in the United States.”

Robertson says many students were pleasantly surprised to discover that the discipline of food history even existed. Isabel Janeff (Sargent’23) says that when Megan Elias, Metropolitan College Gastronomy Program director, visited the class, she “and some other students were on the edge of our seats,” as Elias shared the program’s offerings, such as food history and food science.

A recent transfer student with plans to study physical therapy, Janeff was inspired to present on the global history of bread after a recent visit with her uncle in Kentucky, who started a sourdough bread business during the pandemic. “It’s his part-time job now,” she says. “We went to farmers’ markets to sell bread with him when we visited…he even ordered a fancy oven from Germany.” In just 10 slides, Janeff’s presentation took readers from bread’s origins in the Middle East’s Fertile Crescent, through the Wonder Bread era, to the fascination with sourdough spawned by COVID-19 lockdowns. “I did not have success with it,” Janeff says about the sourdough craze. “We had a sourdough starter, but it fizzled out after a month. It takes two days to do.”

Isabel Janeff (Sargent’23) tells the class how her uncle’s sourdough business inspired her to look deeper into bread’s history. Slide courtesy of Janeff

For Ronia Peterson (CAS’24), the option of creating a website for her final project was a huge draw. Crafting all the HTML, CSS, and background images herself, her project explores what she calls the three main roles of cooking in video games: cooking for health (wherein cooking is essential to gameplay), cooking for stamina (food as an added bonus), and finally, cooking simulation games. Asked her favorite in the latter category: “Battle Chef Brigade might be my favorite,” Peterson says. “I think it’s the most unique in terms of gameplay. The original Cooking Mama and Cake Mania also hold a special place in my heart, though, since I played them so much when I was a kid.”

Beyond a newfound appreciation for food writing, Peterson says, the seminar “helped me think about food in a more positive way.” Though initially hesitant to engage in class due to her sometimes uneasy relationship with food, she says, “my fears were unfounded and I felt very comfortable… The class definitely allowed me to think about food in terms of what it means to me, rather than just this abstract idea of something I should feel ashamed for enjoying or should avoid.”

Writing with a Sense of Taste