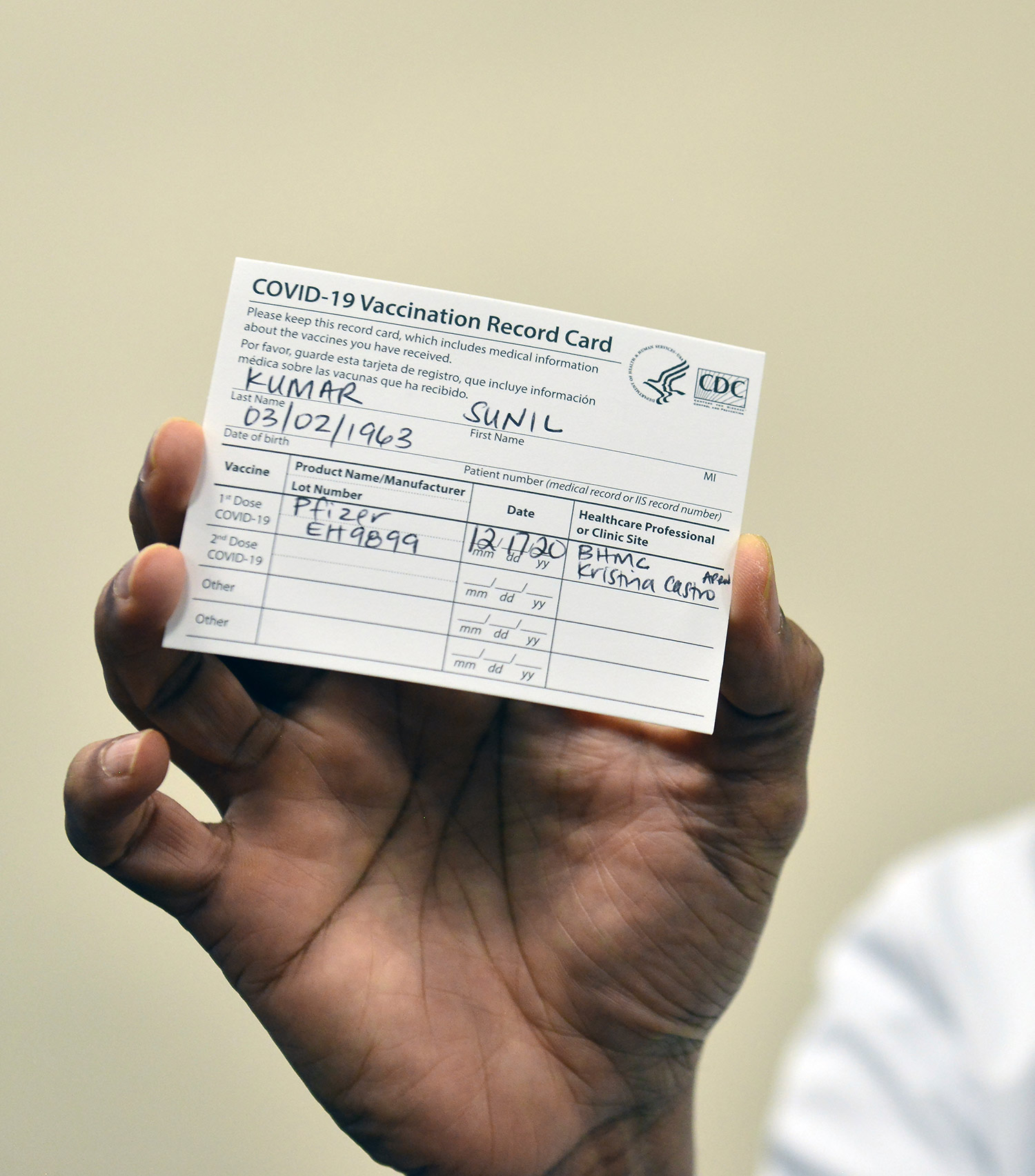 Some businesses and other private entities might demand documentation of COVID-19 vaccination before people can enter their premises. Photo by MPI10 / MediaPunch /IPX via AP

“Vaccine Passports”: COVID-19 Protection or Discrimination against BIPOC and the Poor?

“It’s not going to be mandated from the federal government,” Anthony Fauci declares about “vaccine passports” certifying holders as COVID-vaccinated. Reassurances from the president’s top medical advisor for the pandemic hasn’t quelled concern in some quarters that such passports amount to Big Brother vacuuming personal data (even though the information would be confined to whether bearers had gotten shots) and infringing on personal liberty.

In reality, says Fauci (Hon.’18), director of the National Institute of Allergy and Infectious Diseases, vaccine passports likely will be instituted by private businesses and nonprofits, from theaters to universities, seeking to protect their workers, patrons, and students. But while some applaud passports as a way to achieve herd immunity, others worry about equity.

“There are plenty of people in plenty of areas that want the vaccine that are having a hard time getting it,” says Michael Ulrich, a School of Public Health assistant professor of health law, ethics, and human rights and a School of Law assistant professor. “Are they going to be shut out of these places? [They’re] more likely to be low-income, lack transportation, and more likely to be racial and ethnic minorities.”

BU Today asked Ulrich to parse the pros and cons of vaccine passports.

Michael Ulrich:  Exactly. The federal government is less concerned with mandating this on a nationwide scale than trying to work with companies that want this. That ends up more a regulatory role, working on things like privacy and data use. Private entities are saying, “Look, this is a way for us to potentially get our business going again, if this is going to make people feel safe and like they can come back.”

BU Today: Is there any legal impediment against private entities requiring proof of vaccination?

Michael Ulrich: There aren’t constitutional issues, because that only deals with the government. But a lot of statutes prohibit private entities from discriminating against people—the Civil Rights Act, the Americans with Disability Act. If somebody qualifies [for being able] to say, “I can’t be vaccinated because I have medical contraindications,” that might be discriminatory.

Now, if somebody says, “I just don’t want to get the vaccine, you have to let me in,” that might be more difficult to prove a legal right to enter. If a private entity says, “This is for the safety of the students or the customers or the attendees,” that’s a strong justification for regulating who comes in.

The difficulty is in the details. Every person who doesn’t want to get one could say, “I have a medical issue or religious objection.” Then the question is, are these passports going to have you prove that? The other issue is, typically vaccine mandates are for things we’ve had for decades and we know they’re safe. There’s credible evidence for the COVID vaccines, but they are still technically under emergency use. So somebody might say, “I don’t have a medical or religious issue, but these haven’t been fully assessed, so I don’t feel safe taking it.”

BU Today: Fauci has said the mounting evidence is that the COVID vaccines are more effective in the real world than in the trials, which is the reverse of what’s typical.

BU Today: If the feds are not going to mandate vaccine passports, is there any legal impediment to states doing so?

Michael Ulrich: In general, states have the authority to mandate vaccines. You can punish [refusers]—your children can’t go to school if they’re not vaccinated, or something. You can’t forcefully require somebody to be vaccinated. Again, a court might say, “The data say that this is safe, therefore the state is justified in having this mandate,” or a court could say, “This is under emergency use, so you cannot mandate.” We simply don’t know. I believe states would be allowed to prevent private entities from doing this, but it would likely be through some anti-discrimination law on the state level.

We are a litigious country in general, and this issue has become so political.

BU Today: It sounds like no matter which way we go, someone somewhere is going to sue.

I think that’s exactly right. We are a litigious country in general, and this issue has become so political. The Texas governor already had an executive order saying there’s going to be no mandate. [Massachusetts Governor Charlie Baker says more residents must be vaccinated before he’ll consider the passport issue.] It’s harder to challenge the state government [by] saying you have to regulate more, you have to pass vaccine passport requirements. Those are unlikely to be successful. It’s more likely that state action saying we’re going to regulate it is going to be challenged.

BU Today: Given that COVID-preventive measures, from masks to distancing to passports, have become culture war markers, would it help or hurt public health to require proof of vaccination if it generates a backlash of people refusing it?

Within the public health community, there are constant debates over this. The pre-COVID measles outbreaks in California and New York [had] some public health people saying, “Take away the religious, philosophical exemptions and mandate it for everyone.” People in public health also said, “That’s just going to piss people off, what we need to do is educate them.”

I could see something where it’s more effective in targeted locations. A university might be easier, because students are younger, maybe less likely to be entrenched and refuse [vaccination documentation].

BU Today: What about international travel? Will we see, if not governments, then airlines saying that in addition to your regular passport, you also need a vaccination passport?

Across borders, there is a lot of legal authority to regulate, for diseases, who is coming in and out. For airlines, part of it is going to be, “We’re mandated to do contact tracing. That’s a lot on us. We would like to cut that off by having this vaccine passport mandate.” [The issue is] going to be whether they are violating any anti-discrimination laws. You can see courts evaluating it in different ways. There’s also the issue of how the public would respond. Are people going to stop flying Delta because they have a vaccine mandate and American Airlines doesn’t? Employees at these private companies—how do they feel? “I’ve got to go into work. I would feel more comfortable with a vaccine mandate—if I knew the people I was taking care of were unlikely to be carrying the disease.”

“Vaccine Passports”: COVID-19 Protection or Discrimination against BIPOC and the Poor?

There are 36 comments on “Vaccine Passports”: COVID-19 Protection or Discrimination against BIPOC and the Poor?

“Vaccine Passports”: COVID-19 Protection or Discrimination against BIPOC and the Poor?
36
share this