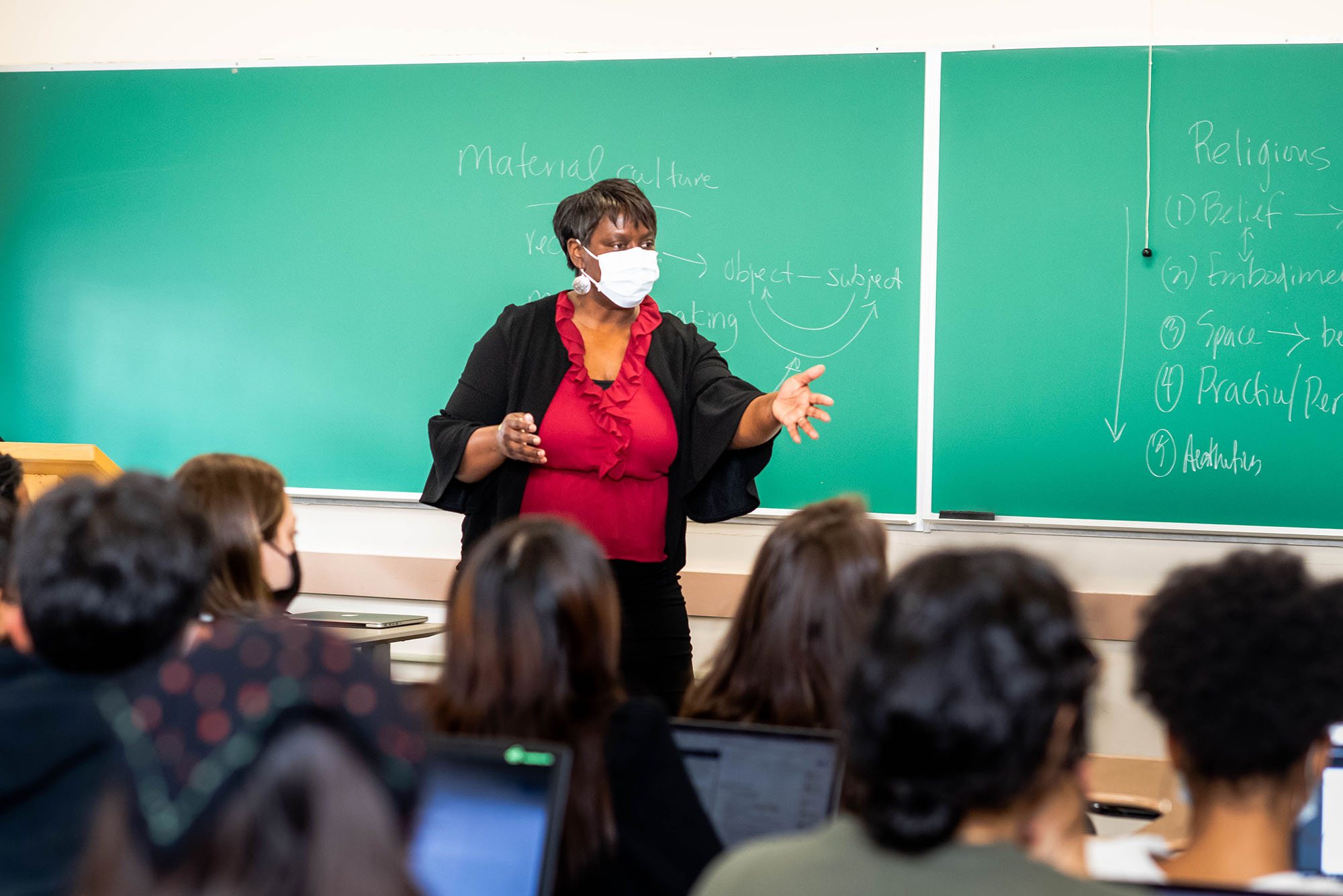 “Professor Guillory gives us a very diverse interface where anyone can plug in and take back something that’s really meaningful for them,” says teaching fellow Jeta Luboteni (GRS’27) of Margarita Guillory’s Religion and Hip Hop course. Photo by Jackie Ricciardi

This Could Be the Coolest Religion Class You Ever Take

“There’s nothing wrong with starting your morning off with a little DJ Screw,” pronounces Margarita Guillory as snippets of the pioneering Houston DJ’s “One Life to Live” play from slides pulled up on students’ laptops.

As far as mottos go, it’s not a bad one. (Read about DJ Screw’s impact on hip-hop here). But it’s not exactly what you’d expect to hear in a religion class—and even less from a religion professor.

Of course, RN 296—also known as Religion and Hip Hop—isn’t any old religion class, and Guillory isn’t your run-of-the-mill, holy text–quoting professor. Interestingly, the College of Arts & Sciences associate professor of religion didn’t grow up religious. But she was always fascinated by the spectacle of religiosity, as well as the purpose it serves in a community. As a young Black girl in Alabama, she observed her neighbors’ religious practices, ranging from Christianity to Hoodoo—and sometimes both in tandem.

“There was so much religious diversity in the community around me,” Guillory says, reflecting on her Reagan-era adolescence. “For people who were socially marginalized and disempowered in a lot of ways, I saw the variety of ways in which religiosity helped them, and kept them stable in really unstable times.

“I was an anthropologist and I didn’t even know it.”

Before she would study religion as a graduate and doctoral student, however: science.

Guillory earned a bachelor’s degree in chemistry at Emory University and spent almost nine years as a high school chemistry teacher. Religion studies—plus a focus on African American studies—is her second career, as she’s quick to point out. Is it nuts that she went from one field to its diametric opposite (not to mention that she got a PhD to “settle some childhood questions”)? Maybe—but that’s Guillory’s whole deal.

“Always complicate the binary,” she says, seated in her Bay State office. “Why can’t we have both/and? That’s what I hope this class is pushing against, [the idea of] either/or.”

Guillory teaches Religion and Hip Hop in both the fall and spring semesters, and it fills up almost as soon as registration opens. (And as of last year, it qualifies as a BU Hub course.) But what exactly does it cover?

Religion and Hip Hop uses digital media studies to explore diverse religion expressions in hip hop culture, reads the course syllabus. Lessons include a look at tattoos in hip-hop, a unit on the art of turntablism (in which DJ Screw features), another on music videos, and a lecture on Islam and rap delivered by teaching fellow Jeta Luboteni (GRS’27), an Albanian Muslim and lifelong hip-hop fan. Reading assignments go hand-in-hand with listening assignments—when was the last time you had to listen to Kendrick Lamar for class?—and discussions involve analyzing tracks like SZA’s “Teen Spirit.”

But how is that religious? you might ask. Let’s be clear: Guillory isn’t saying that hip-hop is inherently religious. “That’s a claim Dr. Anthony Pinn would make,” she says, citing her former graduate advisor, Rice University professor, religious scholar, and coeditor of one of her course books, The Hip Hop and Religion Reader. Instead, she stresses that hip-hop functions like religion, an assertion she breaks into four bullet points.

First: like religion, hip-hop seeks to transmit belief systems. It can also seek to communicate with the supernatural (example: the Yoruba Orishas that Princess Nokia calls to in songs like “Brujas”) and can be utilized to pose existential questions. Finally, thanks to different emceeing or producing styles, hip-hop artists construct musical identities not dissimilar to the way a person can be Methodist or Jewish. (Yes, this portion of the course includes a lesson on Yeezianity.)

Guillory is trying to give students a framework to interpret both hip-hop and the culture that comes with it. The same framework can actually be applied to all music genres, she posits, not just hip-hop. That’s the scientist in her, she says, as well as the dedicated hip-hop fan. She’s also injecting students with a dose of critical—and existential—thinking: “I want my students to see that things that seem contradictory may not actually be,” she says. “What might seem like binary opposition at first, you may see as more synonymous than you thought if you just look at things differently.”

Students respond well to her approach. As a hip-hop fan and a casual believer, Justin Dynia (CAS’22) was curious about how faith and music might intersect. Each week, Dynia says, “I learn so much about some of my favorite artists, including Kanye West and Kendrick Lamar, and think critically about religious themes in their music.” Also on his pluses list: the unit on graffiti, which included a visit to Graffiti Alley in Cambridge.

As a teaching fellow, Luboteni observes the responses firsthand. “There’s something about the class that’s just so engaging, and also very tolerant of students’ religious beliefs or the lack thereof,” they say. “Professor Guillory gives us a very diverse interface where anyone can plug in and take back something that’s really meaningful for them.”

If this class is what Guillory will be best known for in her teaching career, that’s more than okay with her. “When I go into that classroom, it’s like a new breath of fresh air enters into my lungs,” she says. “These are the two areas that I’m really passionate about: religion and hip-hop. To be able to bring those two things together, to grapple with all sorts of big questions and then use really sophisticated theoretical methods to do so—because that’s the scientist that’s coming out of me, right? It’s really wonderful. There’s just no greater joy.”

This Could Be the Coolest Religion Class You Ever Take