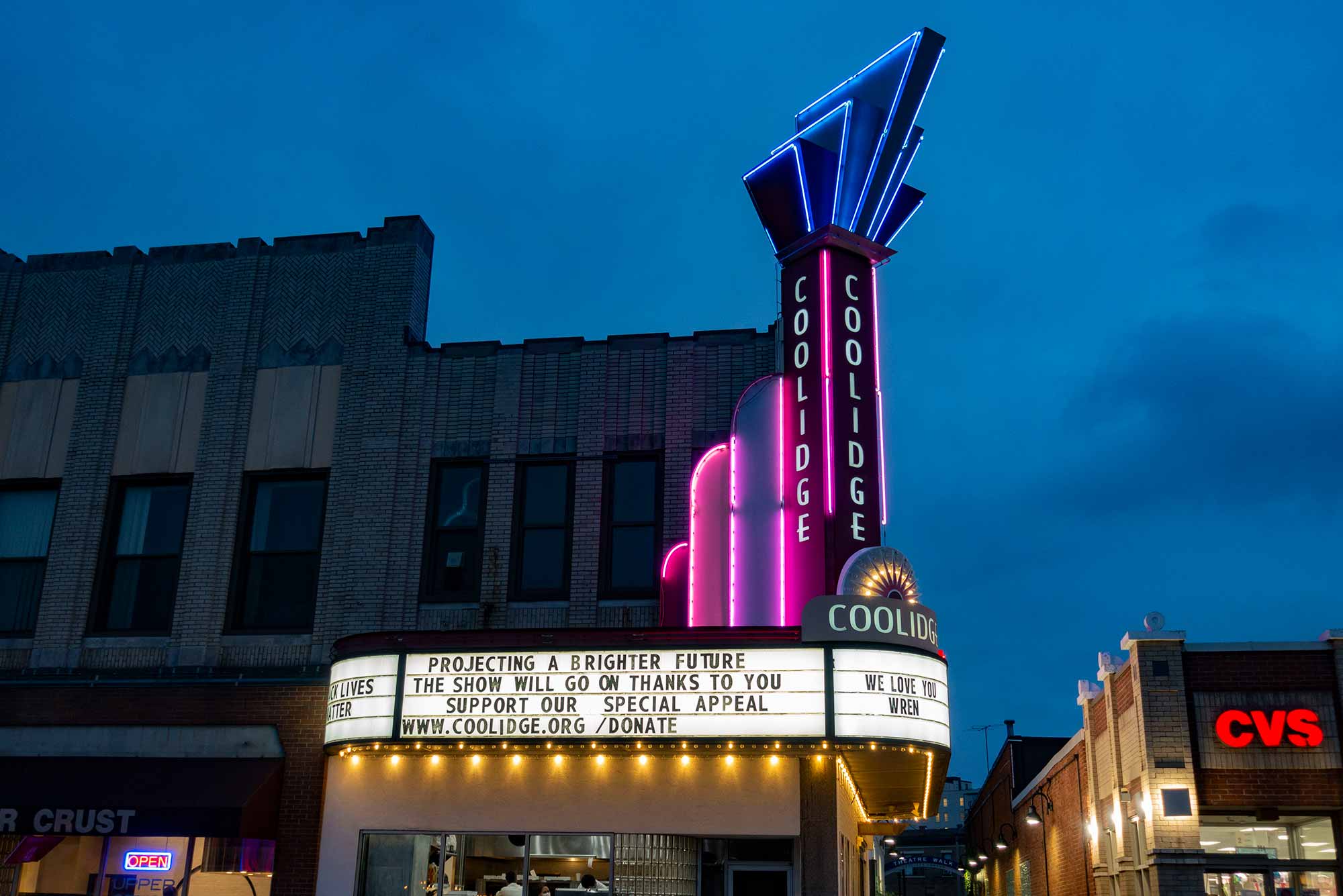 Movie theaters are starting to open back up after almost a year of being shut down by the coronavirus pandemic. Photo courtesy of Coolidge Corner Theatre

I Miss Going to the Movies. But Can They Win Me Back from My Couch?

When Warner Bros. said it would release its entire 2021 slate in theaters and on HBO Max, many started wondering about the future of moviegoing

What was the last movie you saw in theaters? For me, it was Emma, the Autumn de Wilde adaptation of Jane Austen’s 1815 novel. Having never seen a Jane Austen film in a theater, I was excited not only to watch the movie with my friends, but also to watch an adaptation of one of my favorite books on the big screen. I sat in that dark Regal theater outside Kenmore Square, ate my stale popcorn, and laughed, sighed, cringed, and cried along with everyone else in the audience. That was more than a year ago, just before Boston, along with the rest of the country, went into coronavirus lockdown. I still think of that evening, and now with the 93rd Academy Awards coming up on April 25, I’ve been thinking about how much I miss going to movie theaters.

But now that I’ve gotten comfortable streaming so much incredible television, and watching so many movies, all in the comfort of my home—from Apple TV’s Ted Lasso to Netflix’s Oscar-nominated film The Trial of the Chicago 7—I wonder if movie theaters will be able to lure me back this year once this coronavirus is under control.

That wasn’t even a question until Warner Bros. announced in December it would be releasing the entirety of its 2021 film slate on the streaming service HBO Max at the same time as films were released in theaters—and it was as if an epic battle scene from Game of Thrones broke out online.

In an essay penned for Variety, Dune director Denis Villeneuve expressed his disappointment with this decision, Warner Bros., and AT&T, saying, “There is absolutely no love for cinema, nor for the audience here. It is all about the survival of a telecom mammoth, one that is currently bearing an astronomical debt of more than $150 billion.” He said that while streaming services can release great content, it can never replace the experience of watching movies in a theater. “I want the audience to understand that streaming alone can’t sustain the film industry as we knew it before COVID. Streaming can produce great content, but not movies of Dune’s scope and scale,” writes Villeneuve.

He wasn’t the only person to object to this shift: Dune star Josh Brolin reposted Villeneuve’s article on Instagram, writing, “Long live the theatre experience!!! Important article by Denis, director of Dune.” Others in Hollywood also expressed their distaste, including Jason Momoa and Christopher Nolan.

All of a sudden, subscribers could watch Wonder Woman 1984, In the Heights, Dune, and more all from their living room couch or while sitting up in bed. While the decision was made in light of the pandemic and is not seen as a definitive change for the studio, it led audiences and Hollywood insiders to wonder what this will mean for the future of movie theaters in a post-COVID world. What if audiences get a little too comfortable at home—and don’t miss the stale popcorn, $6 Junior Mints and $12 or $20 luxury seat tickets? Then what?

What if audiences get a little too comfortable at home—and don’t miss the stale popcorn, $6 Junior Mints and $12 or $20 luxury seat tickets? Then what?

Like most major changes to the world of cinema, the Warner Bros. decision has caused some traditionalists to lament the downfall of movie theaters. However, I try to take a less fatalistic approach because I’m not quite ready to start mourning cinema as we know it. This isn’t the first threat to the existence of movie theaters, after all. The popularization of television in the late 1940s inspired the same concern. “Theater owners were afraid people would stay home to watch movies instead of going to the theater,” says Deborah Jaramillo, a College of Communication film and television associate professor. “Broadcasters were afraid that movies, which by that time maintained a steady presence on TV after their theatrical run, would skip broadcast altogether and head straight to pay TV channels.”

And yet all these years after the invention of television, movie theaters are still going strong. Box office hits like the new Star Wars trilogy and the films in the Marvel Cinematic Universe were filling seats, and even critically panned films like Cats still brought people out to hate-watch the CGI disaster. Part of what makes the theatergoing experience so special is the companionship of watching a movie with a room full of strangers. How many times have you gone to see a horror movie and screamed with everyone else during a jump scare? Or gone to see a comedy and howled with everyone in your row?

My friend Clay McDermott (CAS’21, COM’21) says he’s angry that movie theaters reopened during the pandemic despite the risk, and he’s in no rush to return, even in a post-COVID world. “I think there’s some resentment in large portions of the COVID-fearing population about how theaters—which should never have reopened during the pandemic—went ahead and opened,” he says. “I would much rather stream a new film. And I don’t think I’m going to feel as safe sitting in a room with a few hundred people just to watch something anymore.”

On the other side, my sorority sister Sanjana Khanter (CAS’22) worries that people will forget about the comforts of a movie theater experience. “I personally really enjoy watching movies in the theater rather than streaming them online,” she says. “I would rather go to a theater and enjoy my movie away from all the schoolwork I have, rather than stream it at home and not have a change in environment.”

That’s the attitude Hollywood is counting on from theatergoers. It’s also how I feel.

Movie theaters didn’t disappear with the invention of the television, and that’s because of the universal human appeal of audience camaraderie. You don’t really get the feeling of dozens of strangers cheering as Black Panther fights Killmonger, or the collective horror of an audience traumatized by the ending of the South Korean black comedy thriller Parasite. With streaming, you get comfort and convenience, but you lose the experience of sitting in a dark room with your fellow moviegoers and seeing a film the way it was meant to be seen: on the big screen.

“For lovers of the cinema, the pandemic has dealt a serious blow,” Jaramillo says. “And I’m not just talking about the fun experience of going out, which is certainly an important part of our culture. If you take film seriously and believe in the aesthetic experience, then going to the movies can be a way of life; it can mean that you’re seeing and hearing a film as you’re intended to. It’s difficult and expensive to replicate that in your home.”

But if the past year has taught us anything, it’s that people are tired of being home. They want normal. They miss normal. And normal means movies. In movie theaters.

This could get my Pretentious Film Buff card revoked, but I like the convenience of streaming. There is something about being able to watch a movie in my pajamas under the comfort of my heated blanket—and yet there will always be something missing. I love streaming, but I love theaters, too. I don’t think that I have to choose between the two in the aftermath of the pandemic. With more people getting vaccinated against COVID-19 every day, I inch closer and closer to returning to the movies. I genuinely look forward to sitting next to my friends in a slightly uncomfortable seat and shoveling popcorn into my mouth while we (hopefully) watch the upcoming musical adaptation of the hit Lin-Manuel Miranda stage show In the Heights.

Streaming has its benefits, and I love how accessible it has made movies for people who cannot see a film in theaters, but I don’t think I will ever cut the movie theater experience out of my life. Yes, there will be nights when I wouldn’t dream of getting off my couch and out from under that blanket. But there will also be nights when I crave the theater—the stale popcorn, the lumpy seats, the sticky armrests, and the audience shrieking, laughing, or crying right along with me.

I Miss Going to the Movies. But Can They Win Me Back from My Couch?

I Miss Going to the Movies. But Can They Win Me Back from My Couch?
0
share this