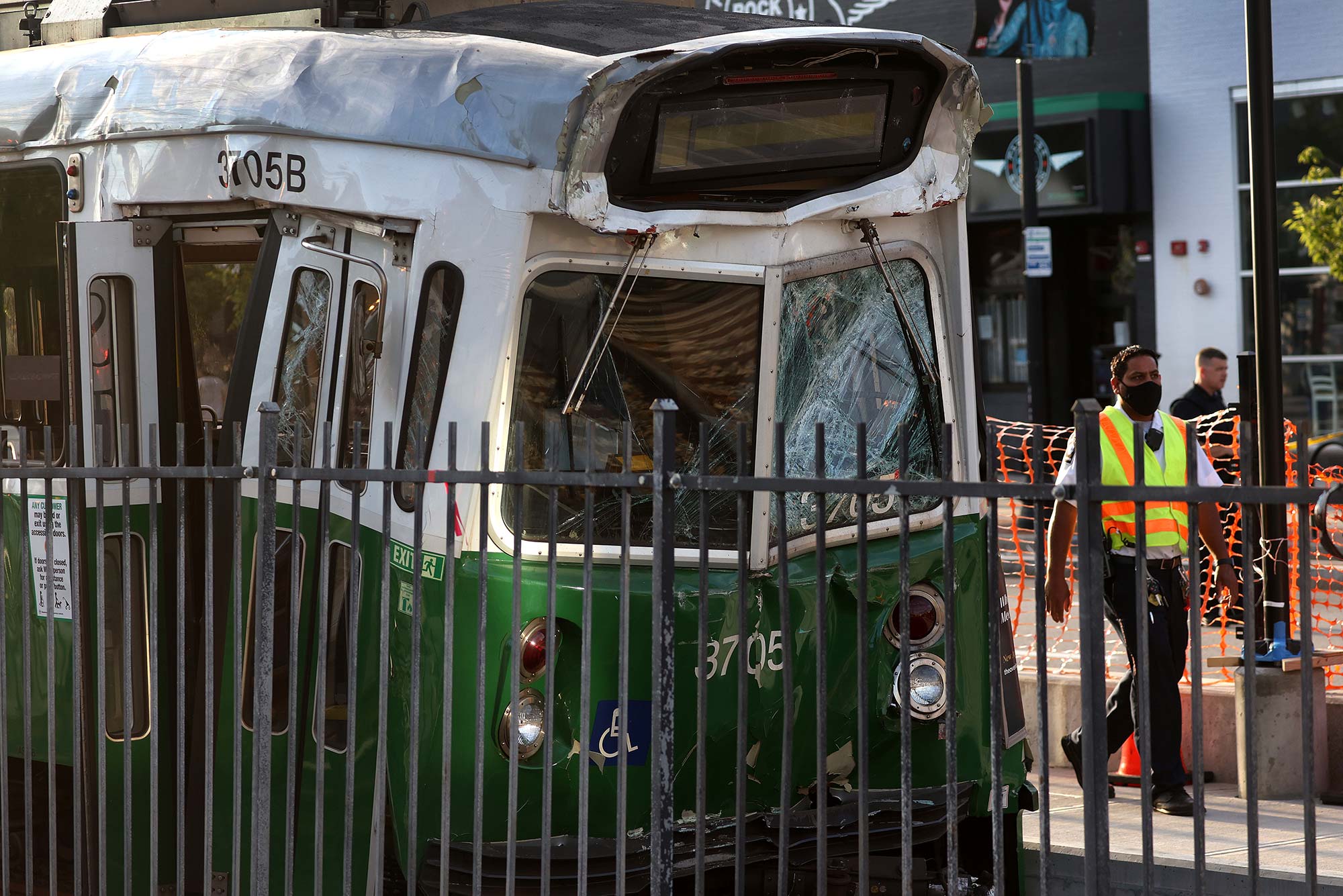 Investigators at the scene of the crash between two Green line T trolleys near 971 Commonwealth Avenue in Boston on July 30. Photo by Barry Chin/The Boston Globe via Getty Images

UPDATE: The MBTA said late Tuesday that it will take steps to fire the operator involved in the crash, WBUR reported.

The operator of a Green Line B Branch trolley “placed the master controller in a full power position” before it rear-ended another westbound trolley on July 30 at the intersection of Commonwealth Avenue and Pleasant Street/Harry Agganis Way, injuring 27, according to a preliminary report issued by the National Transportation Safety Board Tuesday.

The report confirms that the trolley “accelerated to a speed of 31 mph before colliding with the trolley ahead of it that was moving about 10 mph,” but gives no indication why the trolley operator might have sped up or whether it was intentional or accidental. The speed limit for trolleys in the area is 10 mph. The operator’s action was determined from event recorder data.

The report also specified that 24 passengers and 3 crew members of the trolleys were transported to the hospital with minor injuries. Three of the trolley cars derailed and infrastructure was damaged, so shuttle buses replaced trolley service until repairs were made and normal service resumed the next day.

The T had no immediate comment on the NTSB report.

The investigation will continue, even as the MBTA gets closer to unveiling its $29 million revamp of the B Branch stations along West Campus.

“Future investigative activity will focus on internal and external oversight, operational testing, crashworthiness of the equipment involved, and employee fitness for duty,” the preliminary report says.

The operator was placed on paid administrative leave after the crash, but has not been publicly identified. Local TV station WCVB did name the driver just days after the crash, and said that he had been previously suspended, in 2017, “terminated with pay,” and then rehired. The T deferred all comment to the NTSB.

WCVB reported that no cell phone was found at the time of the crash, and that investigators are considering whether the operator fell asleep or had a medical issue. Cell phone use by operators was banned after a 2009 Green Line crash near the Government Center station in which 49 people were injured and the operator in that crash was found to have been texting at the time.

The T had already started a long-delayed $170 million project installing various crash-avoidance and speed-control technologies recommended by the NTSB after the 2009 crash and another one in 2008 that killed a train operator. That project is expected to finish in 2024.

Work continued through the summer to build the new Babcock Street station, between Pleasant and Babcock streets, as part of the Green Line B Branch station consolidation project. Photos by Cydney Scott

Meanwhile, the B Branch station consolidation project, begun in February, is headed for completion before the end of the year, several months earlier than planned. The project, part of the ongoing Green Line Transformation, consolidates four stops—BU West, St. Paul Street, Pleasant Street, and Babcock Street—into two larger, significantly improved stops, with new lighting, signage, and shelters and better accessibility. The new stations will be named Babcock Street (between the current Babcock and Pleasant stations) and Amory Street (between St. Paul and BU West).

The Pleasant Street stop, by the crash site, had been permanently closed earlier this year.

Trolley service was shut down for a few weeks in the spring to allow accelerated work on the consolidation to proceed. Construction continues on nights and weekends, with shuttle buses replacing trolley service between Washington Street and Kenmore Square through the end of the work. Occasional weekday work will occur, but will not interfere with trolley service.

According to the T’s weekly project updates, the overall project is 89 percent complete, with workers completing canopy installation on the new stations as well as electric and sign work, concrete sealing, and anti-graffiti treatments. As planned, the inbound side of each station is slightly further toward completion.

The existing BU West and Babcock Street stations will remain open until the new stations are ready.

To keep up with project updates, visit the web page, sign up for updates, and sign up for service alerts. Email questions and comments to GLT@MBTA.com.

There are 2 comments on NTSB Preliminary Report on July 30 MBTA Green Line B Branch Crash: Operator Put Trolley at “Full Power” before Crash