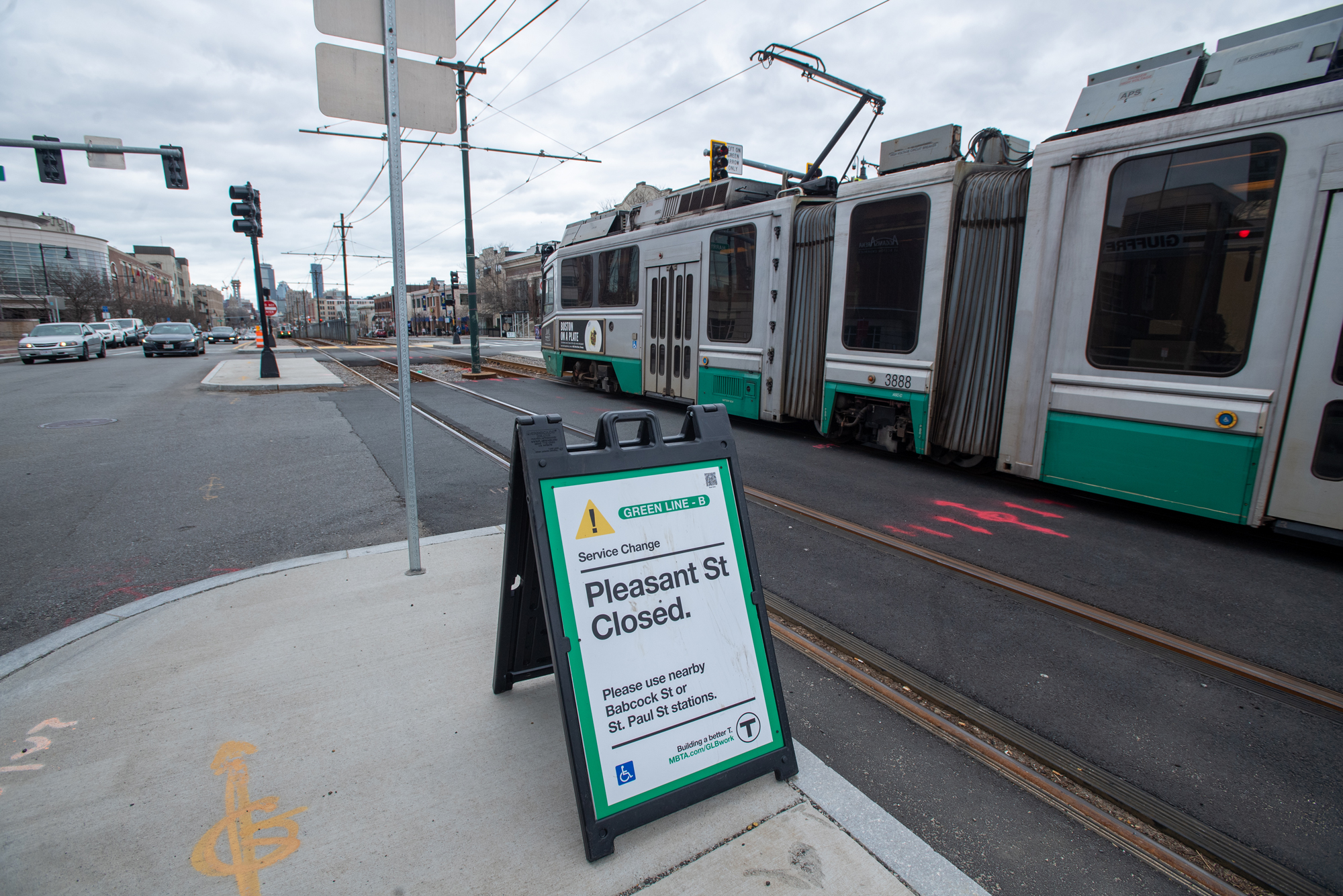 The MBTA will speed up its Green Line B Branch Station Consolidation Project along the West Campus stretch of Commonwealth Avenue by shutting down trolley service between Washington Street and Kenmore Square for a total of seven weeks this spring.

The T will speed up its Green Line B Branch Station Consolidation Project along the West Campus stretch of Commonwealth Avenue by shutting down trolley service between Washington Street and Kenmore Square for a total of seven weeks this spring, so construction crews can work 24 hours a day, 7 days a week. Shuttle buses will replace trolley service.

The good news is that the project consolidating four West Campus T stops into two along Comm Ave should finish months early, according to Angel Peña, chief of the MBTA’s ongoing Green Line Transformation. The T will specify completion only in “late 2021,” but that’s a jump forward from the original February 2022 target.

The result of the $29 million project is supposed to be a faster, safer, smoother ride for all. The construction schedule change “will minimize the duration of disruption for riders and neighbors and deliver results much sooner,” Peña says in a video announcing the change.

But riders who normally take the Green Line trolleys will have to switch to shuttle buses or the regular 57 bus throughout those seven weeks, a disruption originally planned to occur only during nights and weekends. There will also be lane closures on Comm Ave for drivers.

Shuttle bus service will replace trolleys from Saturday, April 17, to Sunday, June 13—except for BU’s Commencement week, when trolleys will return temporarily.

The project, part of the Green Line Transformation, will consolidate four current stops serving West Campus into two larger and significantly improved ones, with new lighting, signage, and shelters and better accessibility.

While the changes may mean a short additional walk to the nearest stop for some people, according to T project manager Leo Murphy, it should also mean a quicker ride through that stretch of Commonwealth Avenue for all passengers, with half as many stops and fewer traffic delays thanks to signal timing changes.

“The four stops will now become proper stations,” Murphy said at a virtual public information meeting earlier this year, “with amenities such as lighting, seating, and access to emergency communication equipment.”

Platforms up to 225 feet long will be able to handle the new longer Type 10 cars. Canopies and windscreens at each platform will provide significantly more protection from the weather, and fencing and other barriers will improve customer safety from traffic. Both new stations are promised to provide better accessibility, with entrances at both ends and more accessible boarding. For a taste of what the new stations will look like, T officials point to the BU Central and BU East stops.

During the shutdown of trolley service, the T will also leverage the increased access to complete additional track replacement and other improvements on the B Branch.