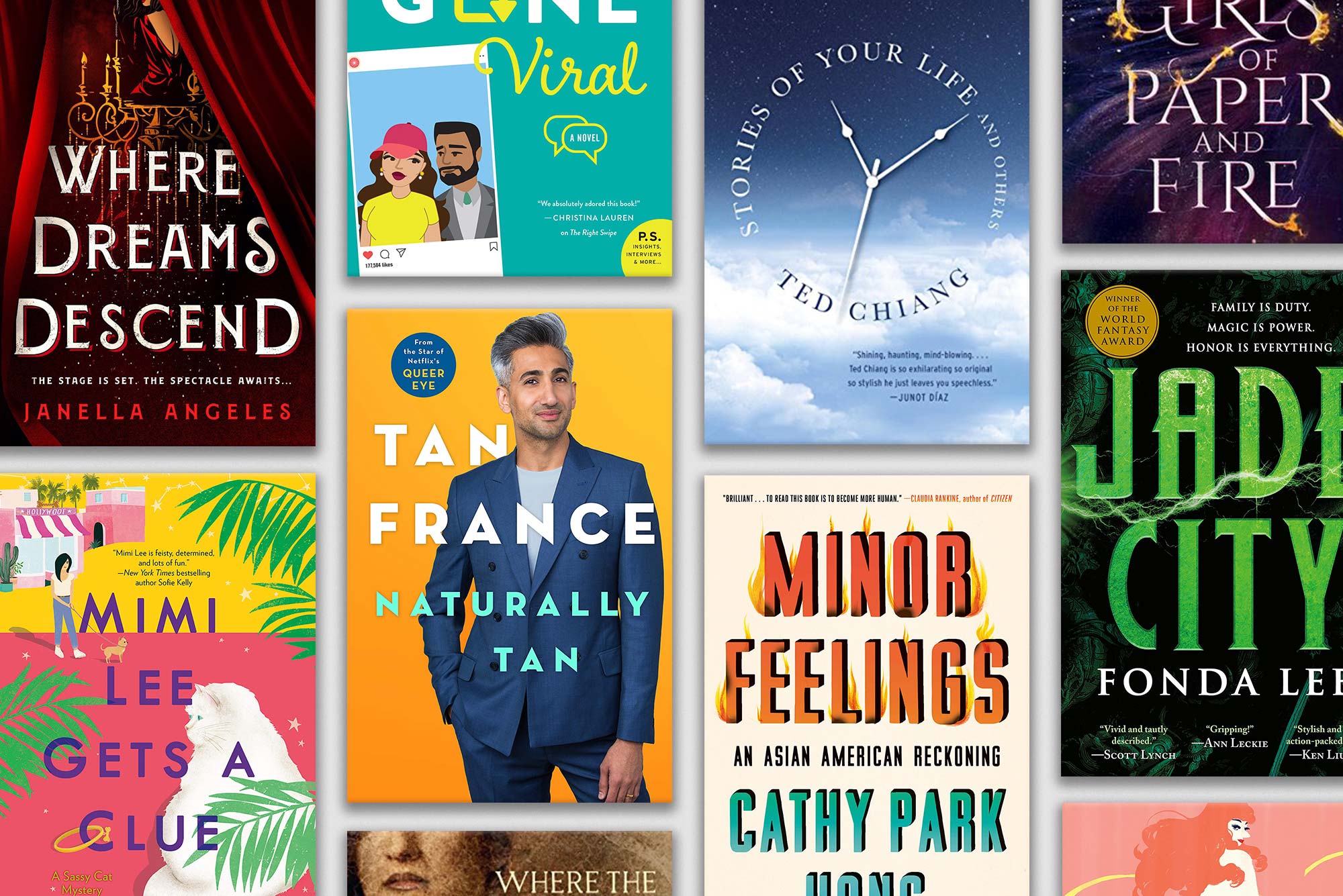 From graphic novels to murder mysteries to fantasy, these books by Asian and AAPI authors will reel you in

This collection of science fiction short stories by Nebula Award–winning author Ted Chiang features aliens, secret government serums that can increase intelligence, a tower so tall that it may pierce heaven if it grows higher, a procedure that prevents people from noticing the physical appearance of others, and other strange phenomena. One of the stories in the collection, “Story of Your Life,” was adapted into the 2016 critically acclaimed film Arrival, starring Amy Adams, Jeremy Renner, and Forest Whitaker. It’s one of the book’s most gut-wrenching stories.

Queer Eye’s Tan France reveals in In this memoir his experience living as a gay Muslim Pakistani man in both Britain and America, his relationship with his husband (a Mormon cowboy), and his career, which includes stints as a fashion brand owner and as the star of a hit Netflix show. Told through a series of fun anecdotes interspersed with fashion advice, Naturally Tan is simultaneously funny, heartwarming, and enlightening.

In this essay collection, poet and writer Cathy Park Hong explores what it’s like to grow up as the daughter of Korean immigrants, to be Asian in America, and how she faced discrimination in her personal, academic, and creative life. Each essay is insightful and emotional, wrapping up Hong’s identity as an Asian American woman, a poet, and a human. Minor Feelings won the 2021 National Book Critics Circle Award for autobiography.

Jade City is an intergenerational saga set on the island of Kekon, which is ruled by two gangs and a rare, magical jade that grants those with the proper training and heritage superhuman traits. But when tragedy strikes the Kaul family, one of the island’s ruling crime clans, tensions between them and their rival, the Mountain clan, come to a head, threatening to tear both the Kauls and Kekon apart. Fans of Francis Ford Coppola’s The Godfather will love this first installment of Lee’s fantasy mobster series.

This book is the first installment of the Sassy Cat mystery novels, and Mimi Lee is struggling with her brand-new Los Angeles pet grooming shop Hollywoof, her meddlesome mother’s attempts at matchmaking, her new cat’s remarkable ability to speak…and the fact that she’s the number one suspect in the murder of a local dog breeder. Determined to clear her name, she enlists the help of her (incredibly cute) lawyer neighbor, Josh, and her sassy cat, Marshmallow, to help her solve the mystery.

Set in both the 19th and 21st centuries, this novel spans not just time, but countries, as Makereti takes the reader from Rekohu, New Zealand, to London. In the 1880s, Mere and her best friend, Iraia, want to be independent, so the two set out from the safety of their Queen Charlotte Sound home to find their freedom. More than a century later, twins Lula and Bigsy find out that their recently deceased mother, Tui, kept many secrets, including their heritage. To find the truth, the two journey from the only world they have ever known to an island they barely knew existed.

Moulin Rouge! meets The Phantom of the Opera in this YA fantasy debut, where a group of magicians compete in a dangerous game of magic and mystery to become the next headliner of the Conquering Circus. Kallia, a showgirl with powerful magic, escapes from the watchful eye of her boss and keeper, Jack, to compete to become the next face of the circus. However, once she gets to the competition, she fears her past is following her when more and more magicians end up either missing or dead.

This YA fantasy is set in the fictional kingdom of Ikhara, where humans of the Paper caste are considered the lowest class, subjugated by the half-human, half-demon Steel caste, and the ruling full-demon Moon caste. Each year, the cruel Demon King selects eight Paper caste girls to serve as his concubines. Lei is one of the unlucky girls swept away from her home against her will and forced to become a so-called Paper Girl. While training to serve the king, she meets and quickly becomes enamored of one of her fellow concubines, Wen, who has secrets of her own. With whispers of rebellion against the Demon King starting to brew, Lei has to decide whether freedom is truly worth fighting for.

In the companion book to Rai’s The Right Swipe—which was recommended on our Valentine’s Day listicle (don’t worry, you don’t have to read the books in any particular order)—wealthy widow Katrina King is making small steps to overcome her anxiety and agoraphobia under the watchful eye of her bodyguard, friend, and secret crush Jasvinder (“Jas”) Singh. However, when a photo of Katrina and a cute stranger goes viral, Jas whisks her away to his family’s remote farm to keep her out of the public eye. Away from the distractions of the city, Katrina and Jas begin to realize that their relationship is far more than professional.

In this fairytale-like graphic novel, Prince Sebastian is a young, attractive, and eligible Parisian bachelor—so, naturally, his parents spend much of their waking hours trying to find him the perfect bride. However, Sebastian, intent on keeping his secret life hidden from everyone, is not particularly interested in finding a bride. At night, he ventures out as Lady Crystallia, the most fashionable woman in Paris. His best friend and the secret designer of Lady Crystallia’s elegant dresses is Frances, a girl with a dream of becoming a world-renowned fashion designer. Can Sebastian keep his secret from the world, and how long will Frances be able to stand hiding her talent in the shadows?