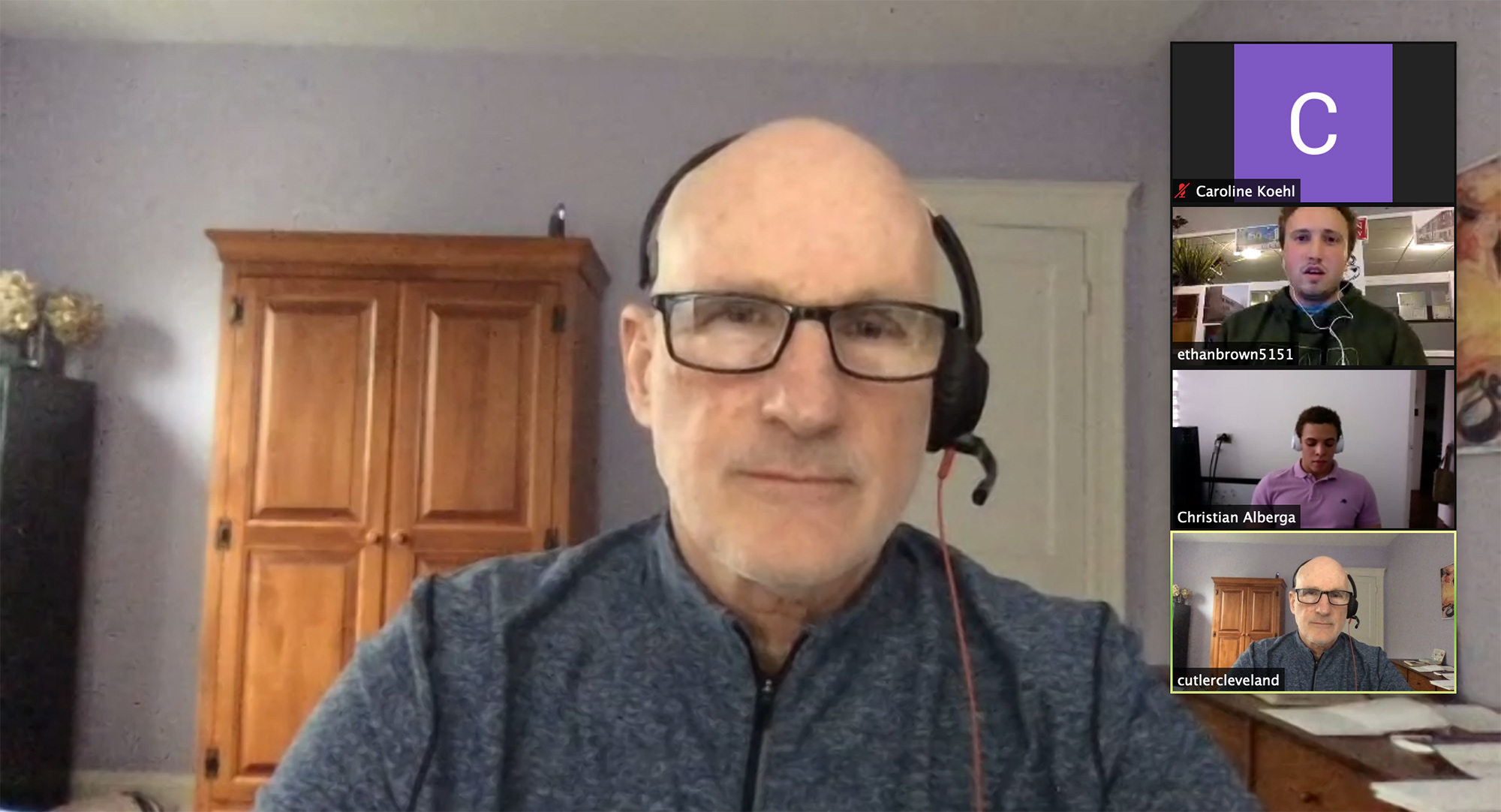 The Sweaty Penguin crew recording the podcast’s first episode, with Cutler Cleveland, a CAS professor of earth and environment and associate director of the BU Institute for Sustainable Energy. Photo courtesy of Ethan Brown/The Sweaty Penguin

Like most students who left BU’s campus last March, Ethan Brown quickly grew bored with the school-at-home routine. So the environmental science major, who grew BU’s satire publication The Bunion from a one-man publication to a 90-member operation in three years, decided to bring together some friends and combine two of his passions: environmental science and comedy.

Brown (COM’21, CAS’21) recruited Caroline Koehl (CAS’22), Frank Hernandez (COM’20), and Shannon Damiano (COM’22) to form the environmental podcast The Sweaty Penguin. The group decides on a discussion topic for each week’s edition, writes a comedic monologue in the style of satirical political commentators Hasan Minhaj or John Oliver explaining the problem, brings in a topic expert, and invites a liberal-leaning student and a conservative-leaning student to discuss possible solutions to the problem.

“These environmental issues, they’re all just science,” says Brown. “It’s not anything political. It’s really the solutions where you start to get into politics as to how you go about solving a particular issue. If people agreed on what the problems were, then we could talk about solutions and make some progress.”

Brown points to the middle of the 20th century, when Democrats and Republicans were able to agree on the problems they faced, but argued when coming up with solutions. Still, they came together to pass important climate protection legislation, including the Clean Air Act, the Clean Water Act, and the Environmental Protection Agency. Nowadays, he says, he fears that people from opposite sides of the political spectrum can’t stand talking to one another, nor do they agree on which of the nation’s problems are worth focusing on.

Brown originally started The Sweaty Penguin as a blog where he satirized environmental news, but there was one problem: “People don’t follow environmental news,” he says with a laugh. So he decided to include other people’s voices and produce a podcast so he could start conversations and educate people on topics he feels passionate about. He received help from the BUild Lab, a collaboration space for BU community members, after attending a virtual lunch, and now the podcast has an opportunity to win grant money through the BUild Lab’s Innovation Pathway, a self-paced program that helps students make their ideas into concrete projects.

The 16 episodes thus far have covered topics like the negative environmental impacts of the beef industry, the environmental and health-related costs of lead paint, automobile traffic’s effect on both the environment and people’s wallets, and more. They have gotten notable experts within and outside of the BU community to guest on each segment, which originally ran about 50 minutes: Rick Reibstein, a College of Arts & Sciences lecturer in earth and environment and founder and director of the Coalition for a Public Conversation on Lead, Valerie Pasquarella, a CAS assistant research professor of earth and environment, and Rachael Garrett, a professor of environmental systems science at ETH Zurich.

By no means is it a one-person show. Brown and Koehl recruited student writers Olivia Amitay (COM’22), Megan Crimmins (CAS’22), and Dain Kim (CAS’22), who help Brown write his monologue for each episode. Hernandez runs the technical side of the show, recording the guest interviews and then editing each episode. Damiano runs the social media accounts, making memes and informative posts for Instagram and Twitter. Her skills in Adobe Photoshop and Illustrator have a big role in building the podcast’s following. Her funny environmental memes and audio clips use cleverly photoshopped images referencing things from Spongebob Squarepants to Godzilla to promote episodes. And of course, most of those images have penguin heads superimposed on them.

Damiano says the show’s strength is how it breaks down complicated topics, both in its monologues and through interviews with experts.

Hernandez says when the group decided to cut the episodes down from the original 40- to 50-minute run-time to about 30 minutes, they came up with the idea of shortening each one so it includes Brown’s monologue and the expert’s explanation, since the data show that listeners tune in to those parts the most. Hernandez entered the project not knowing much about climate change, but says working on this podcast has changed that.

“As someone who, coming into the podcast, was not well-versed in environmental problems, my main opinion was ‘global warming is bad,’ and that’s about it,” he says. “The podcast is really great in the sense that it’s very accessible and very quick and witty, and it tells you all you need to know.”

Now, every four episodes, Sweaty Penguin brings in a liberal and a conservative student to discuss the issues explained in the previous episodes. The group wants to cultivate as large an audience as possible to help people reach common ground on solutions to the existing threat of climate change.

“Ultimately, the goal is to try to help liberals and conservatives agree on what the environmental issues are,” Brown says. “That’s the first step to progress. If we can agree on what the issue is, then we can work to solve it.”