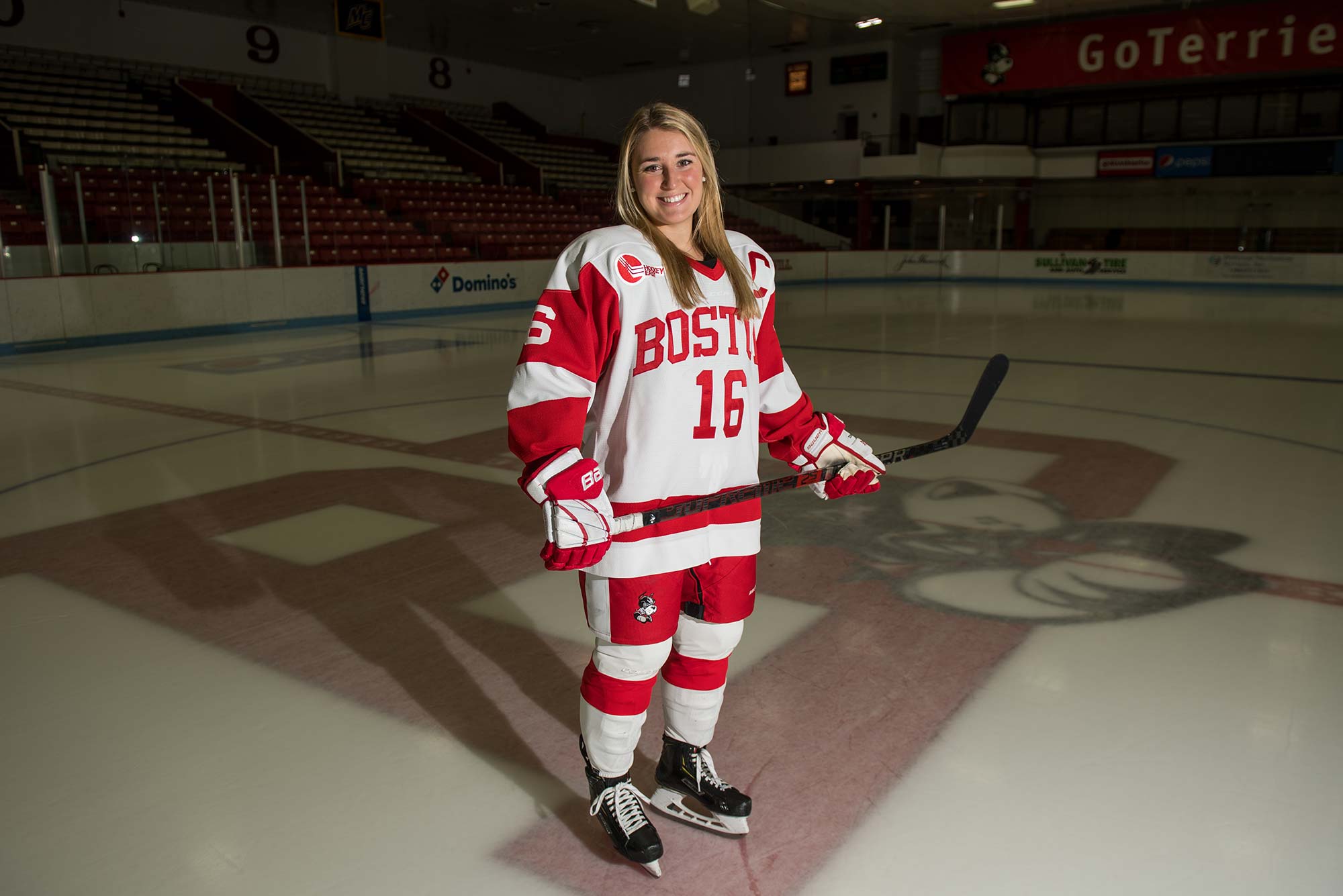 Sammy Davis (Sargent’19, Wheelock’20) was selected by the Boston Pride with the No. 1 overall pick in the 2020 NWHL draft April 28. Photo by Cydney Scott

As the 2020 draft for the National Women’s Hockey League approached, Boston Pride general manager Karilyn Pilch knew she wanted to use the team’s first round pick on a fellow Terrier—Sammy Davis.

Pilch (Questrom’09,’19) spent three years as BU’s director of hockey operations, overlapping with Davis (CGS’17, Sargent’19, Wheelock’20) all three seasons. In a draft day trade with NWHL expansion franchise Toronto, Pilch helped the Pride acquire the top overall selection. Then she did exactly what she’d wanted all along: drafted Davis with the top overall selection in the April 28 draft.

“Once we knew this was the direction we wanted to go, it was: OK, here’s our goal and how do we get there,” Pilch says. “We tried to figure out what the best path was to have Sammy Davis in a Boston Pride jersey, and it was one of those situations where we knew what we wanted and [had to] find a way to get there.”

The 23-1 Pride dominated the NWHL last season, and would have hosted the Isobel Cup championship game, but the season was cut short due to COVID-19.

Davis completed an impressive career at BU, finishing with 66 goals and 76 assists. After missing her junior season because of injury, she bounced back to finish her career the way she started it, as a scoring machine. She was the 2019 Beanpot MVP and a Hockey East First Team All-Star as a redshirt senior this past season. And excelling in the classroom, Davis earned four Hockey East All-Academic Team honors.

“I’m still trying to think about what words I want to say. I want to write a letter to BU and tell the girls how much it means to me,” she says. “I just had the most amazing time at BU. I wish I could redo it. I was able to pursue two amazing degrees. I loved it so much, and I can’t say enough about BU.”

“We are all proud of Sammy Davis and her number one selection in the NWHL,” says BU coach Brian Durocher (Wheelock’78). “Her tireless effort, talent, and overall success during her Boston University career make her a worthy selection. We wish her nothing but success going forward.”

Davis also won the 2020 Sarah Devens Award, given jointly by the ECAC Hockey and Hockey East conferences to a player who “demonstrates leadership and commitment both on and off the ice.” The Devens Award provides a postgraduate scholarship of $10,000.

Pilch describes Davis as “a rock star and super bright.” Davis plans to pursue a doctorate in occupational therapy at Massachusetts General Hospital.

“Honestly, I don’t even know what my future is going to look like,” Davis says. “I kind of see it like how I was in college, with being a Division 1 athlete and academics on top of it—I feel like it’s going to be about the same. Maybe I’ll have to spend more time on schooling and I know I am going to give a lot to hockey, because I love the sport so much.”

“It’s so exciting,” Davis says. “When you walk into a locker room with your teammates, it’s natural. I feel like we’re going to pick up where we left off.”

“Sammy is top to bottom an excellent hockey player,” Pilch says. “We didn’t want to take any chances, I would say, so that she could be in Boston. Any time you have a player like Sammy on the market, that’s someone you’re going to go after.”

Sammy Davis Is No. 1 Overall Pick in NWHL Draft

Sammy Davis Is No. 1 Overall Pick in NWHL Draft
0
share this