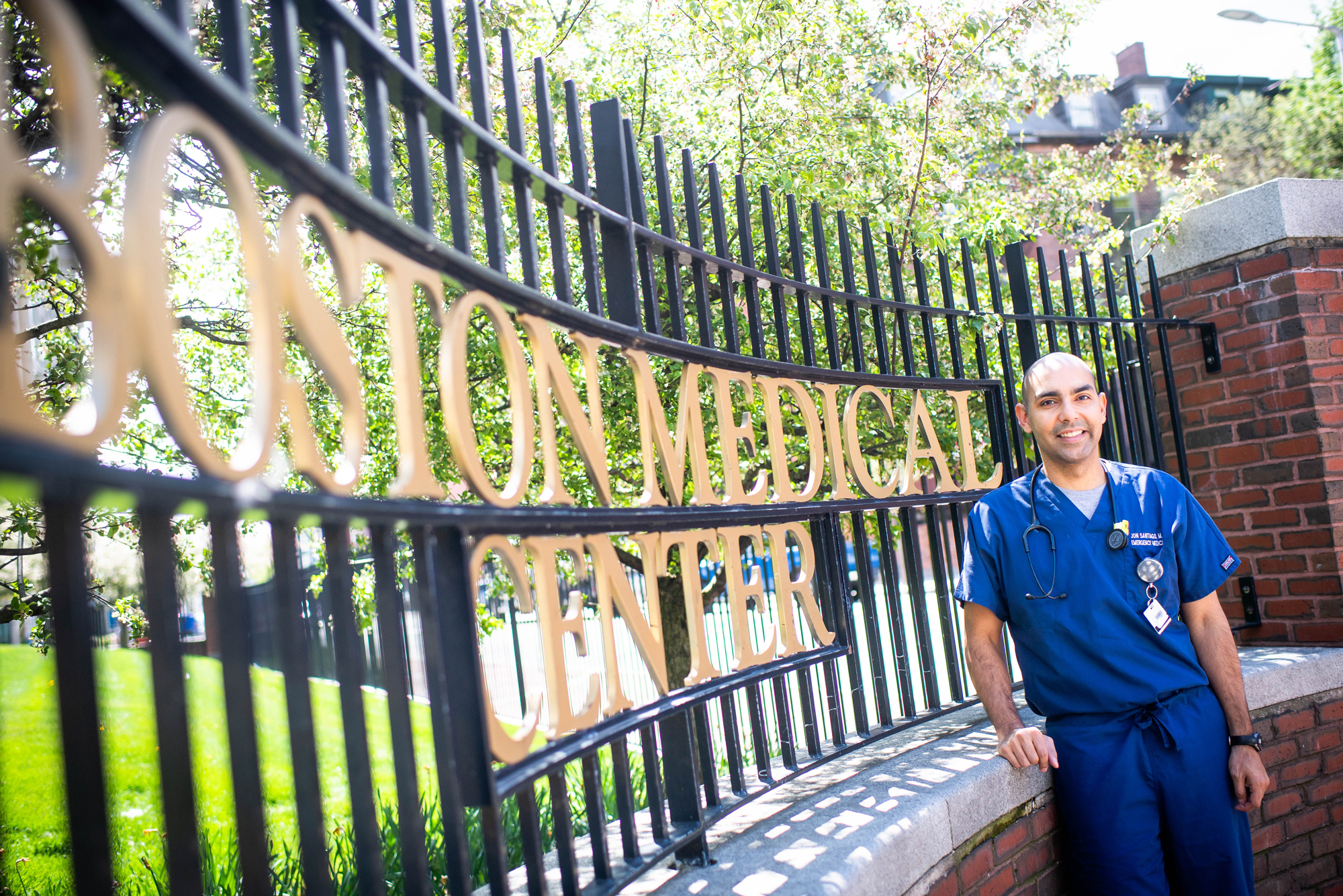 Jon Santiago, the Doctor in the House

Jon Santiago has wanted to work at Boston Medical Center since childhood; now he’s a BMC ER doctor weekends. During the workweek, he wears his other hat, as a state legislator. Photo by Jackie Ricciardi

In his 37 years, Jon Santiago has grown comfortable straddling different worlds, evidenced by his current roles as a physician and a Massachusetts state representative.

His family lived in subsidized housing in Roxbury when he was growing up, and a beloved uncle, doomed by HIV, he says, passed “through the healthcare system as a poor Latino man, and not having the best of access to care.”

Yet from that loss grew an interest in medicine, and hard work earned him a Fulbright Scholarship to study in Paris and admission to the ivied walls of the Yale School of Medicine. His résumé (“the stuff of a job recruiter’s dream,” the Boston Globe notes) in turn brought him five years ago to Boston Medical Center, his dream workplace since childhood, where he’s now a weekend emergency room doctor.

BMC is the Boston University School of Medicine’s teaching hospital and the city’s safety net hospital for disadvantaged patients. Santiago treats people who, like his uncle, are stuck at the back of the line for healthcare. “A lens into the community,” he calls the ER. “Why people show up in the emergency room, whether it’s a heart attack, stroke, gunshot wound—it’s a direct reflection of what’s happening in their respective communities.”

Soon he was itching to join another world, that of politics, believing that in legislating against inequality, he could offer patients “the best chance, literally, at a good, healthy life.”

In 2018, he ran for Boston’s South End seat in the Massachusetts legislature, toppling Byron Rushing, a 35-year veteran representative, in the Democratic primary. Cruising to victory that fall gave him another dual identity, as a representative of both haves and have-nots. His 9th Suffolk district mixes some of the city’s toniest real estate—“I represent the Prudential Center, the Hancock Tower”—with Roxbury’s poorest precincts. “Life expectancy decreases significantly between the two neighborhoods.”

His complex new world has also coincided with COVID-19 and the resulting global pandemic, which has reinforced his district’s preexisting conditions of inequality. It also has made him a war correspondent, tweeting dispatches from the ER battlefield. His written and video commentaries offer everything from updates on the virus to his concerns about how it’s being managed.

“It’s 6:45 in the morning. I am wrapping up my shift,” he says in one recent video. “It was a busy week. We passed some important legislation in the Statehouse. It was the first time we were able to vote remotely in the almost 400 years that the Statehouse has been running, so that was pretty awesome. And over the course of this week, it looks like things are trending in the right direction. There’s been a decrease in the number of cases.”

“But I’m at the hospital,” he continued, “and if I’m honest with you, I’m a little bit irritated, because there are some hospitals not getting access to the drug remdesivir. As some of you know, that’s the one drug that’s showing some promise.…A lot of big hospitals in Boston did not have access to it, Boston Medical Center one of them.”

His professional world is medicine, but the world of social media, like that of politics, allows him to amplify his voice as a healer.

Santiago’s MD is an asset to the legislature, colleagues say, leading to a seat on the House’s COVID-19 working group. No one knows better than an ER doctor the importance of being able to self-isolate in the pandemic, a challenge for the homeless, whose interests Rep. Kevin Honan (D-Brighton), chair of the Joint Housing Committee, worries about.

“He has been a staunch advocate for the homeless population throughout the city—making sure they have adequate access to shelter, healthcare, and other crucial services,” Honan says. “It is extremely valuable to have the firsthand knowledge of a doctor from one of Boston’s busiest emergency rooms guiding our policymaking decisions during these unprecedented times.”

When advocates for minority groups damned state guidelines for ventilators that they said could discriminate against minorities, Santiago “played a key role” in getting the guidelines changed, says fellow freshman representative Tommy Vitolo (D-Brookline).

Santiago was active on healthcare matters before the pandemic. “His advocacy around the opioid epidemic led to significant support in this past year’s budget for addiction treatment and recovery, including the neighborhoods along Massachusetts Avenue and Melnea Cass Boulevard,” near BMC, Vitolo says.

Switching gears from the ER to State House! Although we’ve passed important laws to address #covid19, challenging issues lay ahead that require conducting business remotely. Hoping to make history today in a body that uses the oldest functioning written constitution in the world! pic.twitter.com/bq0Xv0MnEy

Citing Santiago’s cosponsorship of a bill to remove lead from schools’ drinking water, Deirdre Cummings, consumer program director for the education fund of the advocacy group MassPIRG, says Santiago has “a good breadth of issues. He’s an incredibly hard worker and always willing to listen. He’s just very thoughtful, considerate, and as a freshman, pretty active.”

That hard work involves overnights in the ER Friday, Saturday, and Sunday, and state rep duties, on Zoom and phone these days, as his workweek day job. “When Friday comes, I’ll take a nap during the evening and wake up at 10 o’clock at night and put my scrubs on and head to work,” Santiago says.

To guard his own health amid this grueling schedule, he eats well, jogs, and has “the best partner in the whole wide world,” his wife, a Harvard neuroscientist. “She is the queen of quarantine,” Santiago says. “She has not left the house in like almost two months.”

Vitolo says he knows of another hobby of his colleague’s: “Rep. Santiago plays a half decent game of chess.”

The weight of each death

Still, Santiago acknowledges that what he’s seen in the ER in the last two months is “weighing on me.”

“Each death is someone’s family member—someone’s father, someone’s mother, someone’s brother or sister,” he says. “BMC is the busiest emergency department in New England… We see hundreds and hundreds of cases a day.” COVID-19 hasn’t made life easier. “You have to don and doff your personal protective equipment. You have to spend a lot of time with these patients, counseling and talking to them about their symptoms.”

This has changed our country forever. And we can’t just sit back and wait for the next pandemic to come.

Don’t confuse this for self-pity. “I asked to run for office. I asked to become a doctor,” he says. “The people who inspire me, who keep me going, are the people who didn’t ask to be in this: the parents homeschooling their children right now, the essential workers working on the MBTA or the grocery store shelvers.”

There’s another group of folks who, like him, very much asked to be in this fight, and who Santiago predicts will be a big part of the future of BMC and healthcare thanks to COVID-19: infectious disease researchers, including those at BU’s National Emerging Infectious Diseases Laboratories (NEIDL).

Santiago was in medical school when the South End neighborhood’s fears that the proposed NEIDL might allow deadly pathogens into their community filled the Boston media. Today, two years after it began research into Biosafety Level 4 pathogens (those that do not yet have any treatment), NEIDL researchers are laser-focused on helping to conquer COVID-19.

The facility “doesn’t really come up in conversations,” Santiago says. “Even when I was running for office, I think the NEIDL came up once or twice. If you take that as a measurement, a lot of the opposition has died down.”

In part, that reflects how COVID-19 has altered our thinking about far-reaching plagues and the importance of those trying to eradicate them, he says.

“This has changed our country forever. And we can’t just sit back and wait for the next pandemic to come. When it comes, we have to be ready and willing to address it…and make sure that we’re addressing a lot of the social inequities that have resulted in particular communities getting hit the hardest.”

Jon Santiago, the Doctor in the House

There are 6 comments on Jon Santiago, the Doctor in the House

Jon Santiago, the Doctor in the House
6
share this