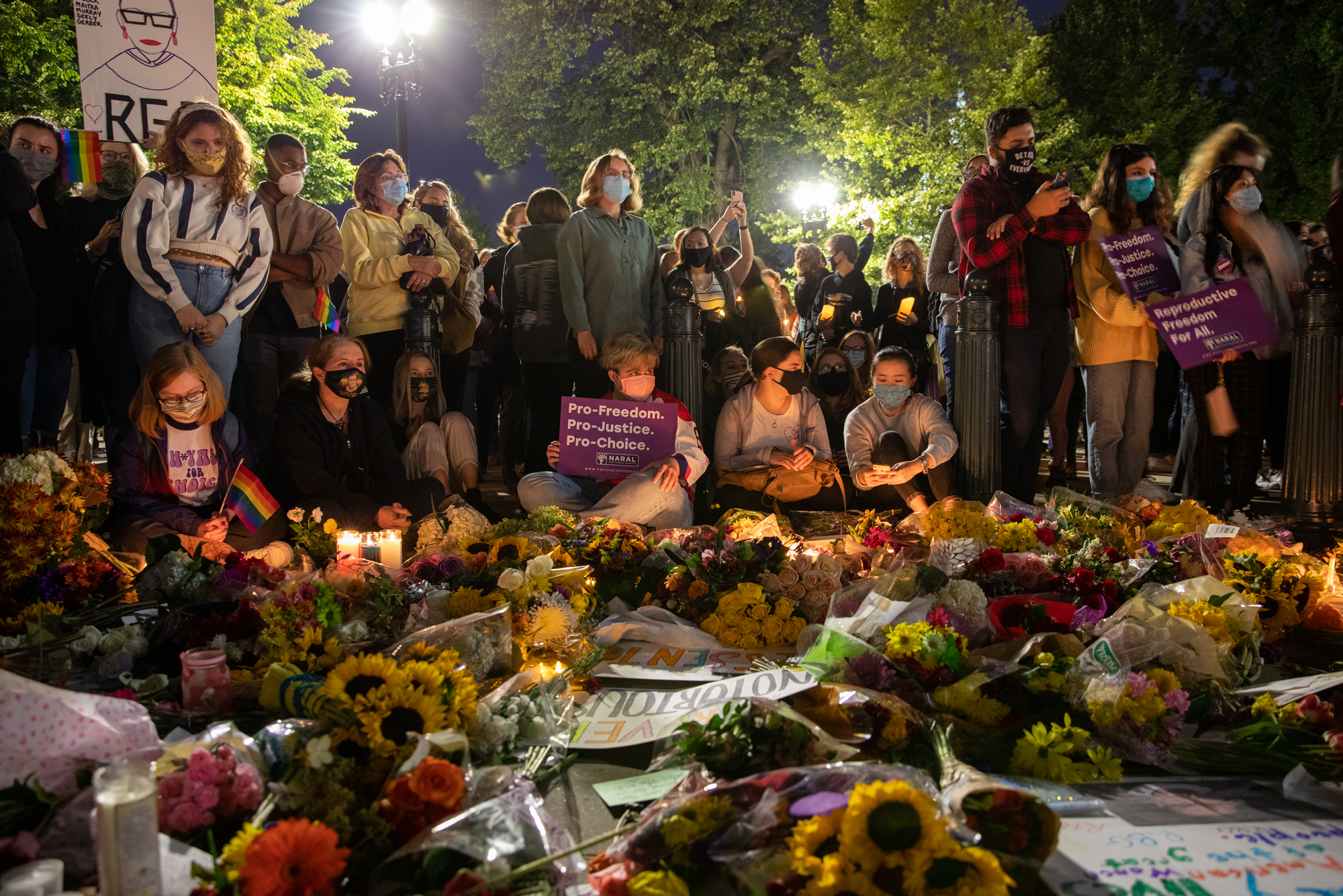 Mourners at a makeshift memorial during a vigil for Supreme Court Justice Ruth Bader Ginsburg outside the Supreme Court in Washington, D.C., on September 19. Photo by Amanda Andrade-Rhoades/Bloomberg via Getty Images

“RBG Convinced Me I Could Make a Difference in the World”

Kennedy Barber-Fraser cried for hours after a friend told her that Supreme Court Justice Ruth Bader Ginsburg had died Friday at the age of 87. “I could not even move for 20 minutes because I was in shock,” Barber-Fraser (LAW’22) says. “Usually I write Facebook posts pretty quickly praising my heroes who have died for their incredible work and legacy, but [with Ginsburg’s passing] it took me a day to get my bearings, reflect on RBG’s importance and work, and write a post in her memory.”

Barber-Fraser is not alone in her grief—students from around the University shared similar sentiments over the weekend when asked to reflect on her loss. A common thread was respect for how Ginsburg, a liberal justice, feminist icon, and stalwart voice for women’s rights, inspired them, and in the case of School of Law students, was instrumental in their choice to study law, and how they looked up to her at a time when the court was increasingly leaning conservative.

BU Today reached out to students and student groups across the University, asking them to share their thoughts about Ginsburg’s life and legacy. Their remarks have been edited for length and clarity.

RBG. A feminist, a role model, a woman of strength. Forever she leaves a legacy ❤️ 📷: @daylightillustrations

[I am] a woman who always had an interest in practicing law, since the sixth grade, [so] Justice Ruth Bader Ginsburg has been such an inspiration to me. First, representation is very important, so her presence on the Supreme Court proved that it was possible to see myself in a place like that (further strengthened by Justice Sonia Sotomayor’s presence on the Court).

It is more than that for me though. RBG used her position of power on the Supreme Court to defend minority groups continuously, writing vigorous dissents when she did not agree with her colleagues. Her bravery and desire to protect and defend women, people of color, and the LGBTQIA+ community (including as an attorney for the ACLU) with a liberal lens is what inspires me. Her relationship with her husband proved that women do not have to give up their dreams or lives to support their family, but can do both. The way he constantly supported her, recognized her brilliance alongside his, and never tried to dim her light has raised the bar for what I expect from my future significant other.

Last, the fact that Justice Ginsburg stayed on the Court through so many illnesses, until her death and right before the election, proves that she took her position extremely seriously. She proved time and time again that women not only deserve a seat at the table, but can get the job done and do it extremely well. It will be extremely hard to open my case books in class and know that she is dead when I see her name next to opinions and dissents.

“Fight for the things you care about, but do it in a way that will lead others to join you.” The women of Alpha Epsilon Phi are so honored to have such a strong, powerful alum, and look to replicate her integrity, moral compass, and strength in our own lives every day.

For me, Justice Ginsburg represented the fight for equality that is very much still continuing. She was smart, quick, and passionate, particularly in regard to many basic human rights issues, and that in itself is inspirational. While she was not a sole factor in my decision to study law, I’m so grateful for her paving the way for the normalization and acceptance of women studying law. I’m also an aspiring judge, and her dedication and perseverance were hugely influential in this goal.

When I first heard the news of her death, I was utterly shocked. After how difficult a year 2020 has been, this was something that was a hard blow. She had dealt with so many health complications, and came out of them as strong as ever, that I began to take her recoveries for granted. Naturally, the timing of the upcoming election is also a huge worry on a personal level, in regard to my rights as a woman. With that being said, RBG worked tirelessly her whole life, and I am sad that she had to work this hard up until her final moments.

My absolutely favorite quote of hers is: “People ask me sometimes…‘When will there be enough women on the court?’ And my answer is, ‘When there are nine.’ People are shocked, but there’d been nine men, and nobody’s ever raised a question about that.”

RBG convinced me I could make a difference in the world. Because of her, I decided to study law in order to make that difference. When I first heard the news of Justice Ginsburg’s death, I was shocked. That shock quickly morphed to devastation. I can’t believe she’s gone. But I hope she is with her husband and not in pain anymore. I plan to mourn RBG alone and with my close friends. I feel I’m able to better process the loss in that way.

My favorite decision of RBG’s is Bush v. Gore [the Supreme Court decision that resolved a recount dispute in Florida’s 2000 presidential election]. RBG ended her dissent in that case with, “I dissent,” which was so powerful, because most dissents end with, “I respectfully dissent.” Such a small change made her intentions very clear, and I thought that was incredible.

RBG was one of my inspirations in coming to law school. As a Jewish woman, seeing her success and tireless advocacy was a constant source of strength and hope that I could do the same. If I could have even a fraction of the impact she had on our country, I would be so proud.

My initial reaction [to the news of her death] was shock, followed by sadness. But in Judaism, there is a belief that those who pass away on Rosh Hashanah are righteous. Something about that feels very fitting. Now, I’m motivated even more to continue to support and value her legacy, continuing to fight for justice and equality.

On Friday September 18, at around 8 pm, I received a notification from the News app on my phone. My heart stopped. The mitochondria [sic] of the Supreme Court had passed, leaving a third opportunity for the current president to shift the Supreme Court to the right. I felt sick, heartbroken, and terrified. I knew that the current administration would do everything they could to hastily fill that vacancy before November 3.

But it also angered me. How could my first reaction to the death of a champion of women’s rights be anger? How could I focus my attention on the implication of her empty seat and completely ignore her accomplishments? How could I disrespect her by undermining everything she’s done to advance my rights as a young Asian-American woman?

Yet at the same time, she would be telling us to continue to push back, to fight for her dying wish to be fulfilled, to make sure a new Justice is not confirmed before inauguration. We have to honor her legacy by doing exactly that. So instead of letting our fears consume us, we must come together and fight for her, just as she fought for us her entire life and career.

Text RBG to 50409 to send a letter urging your senators to commit to refusing to confirm a new Justice until 2021. Register to vote at vote.org and request your absentee ballot. This election is the most consequential in modern history and we cannot underestimate our power.

Justice Ginsburg, your strength and tenacity will always be remembered. Thank you for your courage and your commitment. Rest in power.

“RBG Convinced Me I Could Make a Difference in the World”