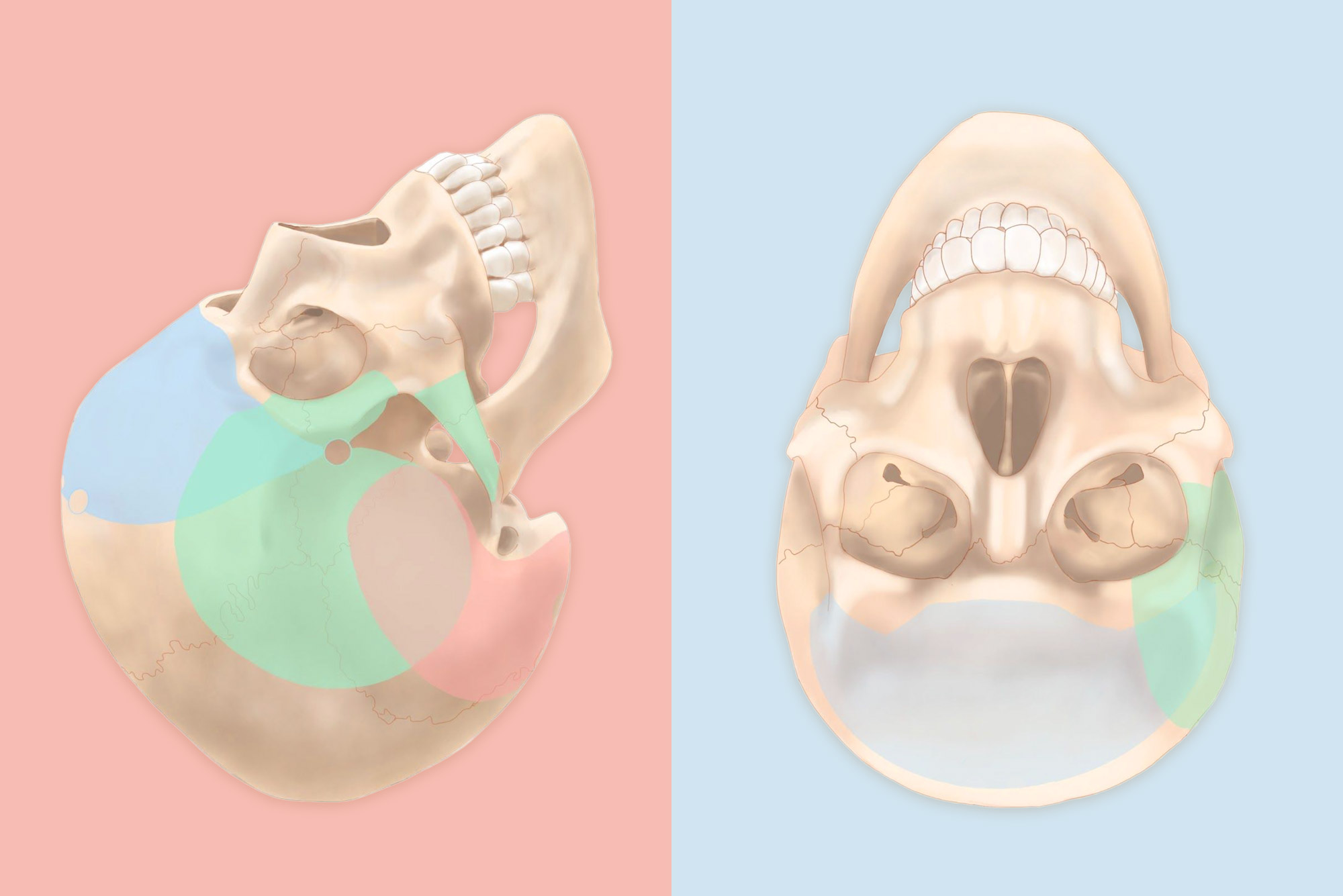 A meningioma of the cavernous sinus is an unwelcome diagnosis. A slow-growing tumor in a heavily networked part of the brain, it gradually places more and more pressure on the areas around it. Pain, facial numbness, and vision problems can follow. The treatment (squeamish readers should skip ahead a few lines) is equally unpleasant. Neurosurgeons peel back the scalp, drill holes—called burrs—into the skull, lift a bone flap, then remove the tumor. Precision is everything.

A key part of teaching surgeons exactly where to put those burrs is to provide them with illustrations of the best entry points. Some of the most up-to-date illustrations were created by Olivia James.

During a recent CFA internship, James (CFA’20) worked with neurosurgeon W. Linda Bi and certified medical illustrators at Boston-based Illustrated Verdict to learn how to draw burrs. A painting major who’s minoring in arts administration, James spent a semester drawing and shading images of a human skull. Four color patches—continental swaths of blue, green, red, and yellow—cover much of each skull to highlight the main operation areas; small circles show the optimal burr locations. James and two other students were admitted to the medical illustration internship, one of CFA’s newest, in fall 2018 and spring 2019.

Before then, James’ artistic output had largely been oil paintings of people and objects confronting “societal norms concerning body image”; today, her burr drawings are being used in Bi’s presentations to other neurosurgeons.

“Medical illustration, like any powerful graphic presentation of data, has a message, a story line, a hypothesis, a data fact we’re conveying,” says Bi, a Brigham and Women’s Hospital neurosurgeon and a Harvard University assistant professor of neurosurgery. “I increasingly appreciate how an image or a well-designed graphic is so much more powerful than any lecture I can give.”

Illustration has been a key part of medical teaching for centuries, from Gray’s Anatomy illustrator Henry Vandyke Carter in the mid-19th century and Leonardo da Vinci in the Renaissance to the pioneers of the Hellenistic period who created the first anatomical illustrations on papyrus. Even as technology now shines a light on much of the body’s inner workings, medical illustrations still have a range of uses, from elucidating dreary textbook prose to enlivening pharmaceutical sales pitches; illustrations capture what even modern imaging technology cannot: subcellular processes and the relationships between different parts of the body. The best illustrators are fine artists, but also able to grasp complex scientific concepts. A handful become board-certified, qualifying their work to stand up to interrogation in a criminal or medical malpractice court case. There are fewer than 400 certified medical illustrators in the world.

My drawings would go through edit after edit. I learned a lot about the structure of the eye despite not being a STEM major.

One member of that select group is John F. Harrington (CFA’85), founder and chairman of the board of directors at Illustrated Verdict. He helped establish CFA’s medical illustration internship and reviewed applicant portfolios. The first batch of applicants had little direct experience, so Harrington and his colleagues looked for students with certain traits and skills that could translate to the work.

“Medical illustration has to be factually accurate: it can’t be close, can’t be approximate,” he says. “We recognize the students are in the nascent stages of their careers, but if there are some seed crystals inside their work that say this person is very detail-oriented, that’s what we’re looking for.”

A student’s rendering skills—their use of shading and texturing to add realism—must be “very clean,” says certified medical illustrator Melissa Rockefeller, chief medical illustrator at Illustrated Verdict. “We look for an understanding of proportion and perspective.”

The Process of Perfection

The first step for the medical illustration interns was to meet one-on-one with Bi for their individual assignments, getting her direction on the subject matter and the audience—and diving into the science. That wasn’t always easy for Bi to convey or for the students to understand.

“What seems obvious to our mind from a medical perspective may not be so when conveying it to a student who has never encountered medicine before,” says Bi.

One of the interns, former BU student Natalie Charewicz, was given the challenge of illustrating a new technique for scanning the optic nerve with an MRI machine; Bi says the new approach “helps highlight the fluid space around the nerve, as well as the relationship to the nerve pathologies.”

Bi requested a series of carefully placed elementary shapes to demonstrate the procedure: a cylinder sliced through with rectangles and circles. But the simple brief was filled with subtle complexity. The illustration took Charewicz weeks, and many iterations.

“My drawings would go through edit after edit,” says Charewicz. Like all of the students, she did most of her illustrating on an iPad, working at Illustrated Verdict and meeting with Bi and her colleagues weekly. “I actually learned a lot about the structure of the eye despite not being a STEM major. Getting the drawing to be perfect was quite difficult—the angle had to perfectly match the reality of the imaging.”

According to Harrington, who also founded the healthcare training and assessment company Advanced Practice Strategies, Charewicz’s perseverance typifies a trait he consistently sees in artists he employs: discipline.

“What I really appreciate about artists in particular is that whether you’re a musician or in theater or fine arts, there’s a certain work ethic,” he says. “You understand you can’t just jump in and immediately achieve mastery of the skill; you have to respect the process, and the process of mastery takes time.”

“The willingness to experiment and the discipline to look critically at your work, to stop, step back, and have the courage to say, ‘I’m going to scrap this and start over,’ that’s absolutely crucial to being successful in any artistic endeavor.”

Emme Enojado (CAS’21) had a head start on her peers when it came to grasping the science: she’s a neuroscience major minoring in visual arts. For her, there was still plenty of research to be done before she started drawing—“that’s about half of the process,” she says—but it was her artistic talent that was stretched the most.

“My illustration skills have grown exponentially throughout the past year,” says Enojado. “And also the attention to detail, noticing how a tiny bit of red in the eye, for example, can make such a difference in what you’re trying to convey—the ability to bring colors, shading, using those artistic techniques to make an image both realistic and comprehendible.”

Those techniques were tested in a set of illustrations showing the House-Brackmann scale, a classification used to grade stages of facial paralysis. Bi and Enojado considered every detail, including the age, skin tone, and even hair color of the model. An older person’s wrinkles, for example, could detract from the nuances Bi might want to show.

“All of those small details are important to us from the medical storytelling perspective,” says Bi, “but may not be immediately obvious from a purely aesthetic perspective.” Enojado’s series, which shows the gradually drooping face of a middle-aged Caucasian woman with smooth skin and light brown hair, will be used to educate physicians on treatment approaches; her work will also be featured in a research paper Bi is writing for the Journal of Neurosurgery.

“Being acknowledged as an important part of a team of world-renowned experts and illustrators is empowering for a young artist and is an extremely valuable learning experience,” Harrington says.

“You have a physician who’s the lead subject matter expert, and your job is to take that information and turn it into something,” he says. “Each person has a role; it’s recognizing, ‘This person is a world-renowned expert, but I’m really valuable because I can do something they can’t.’”