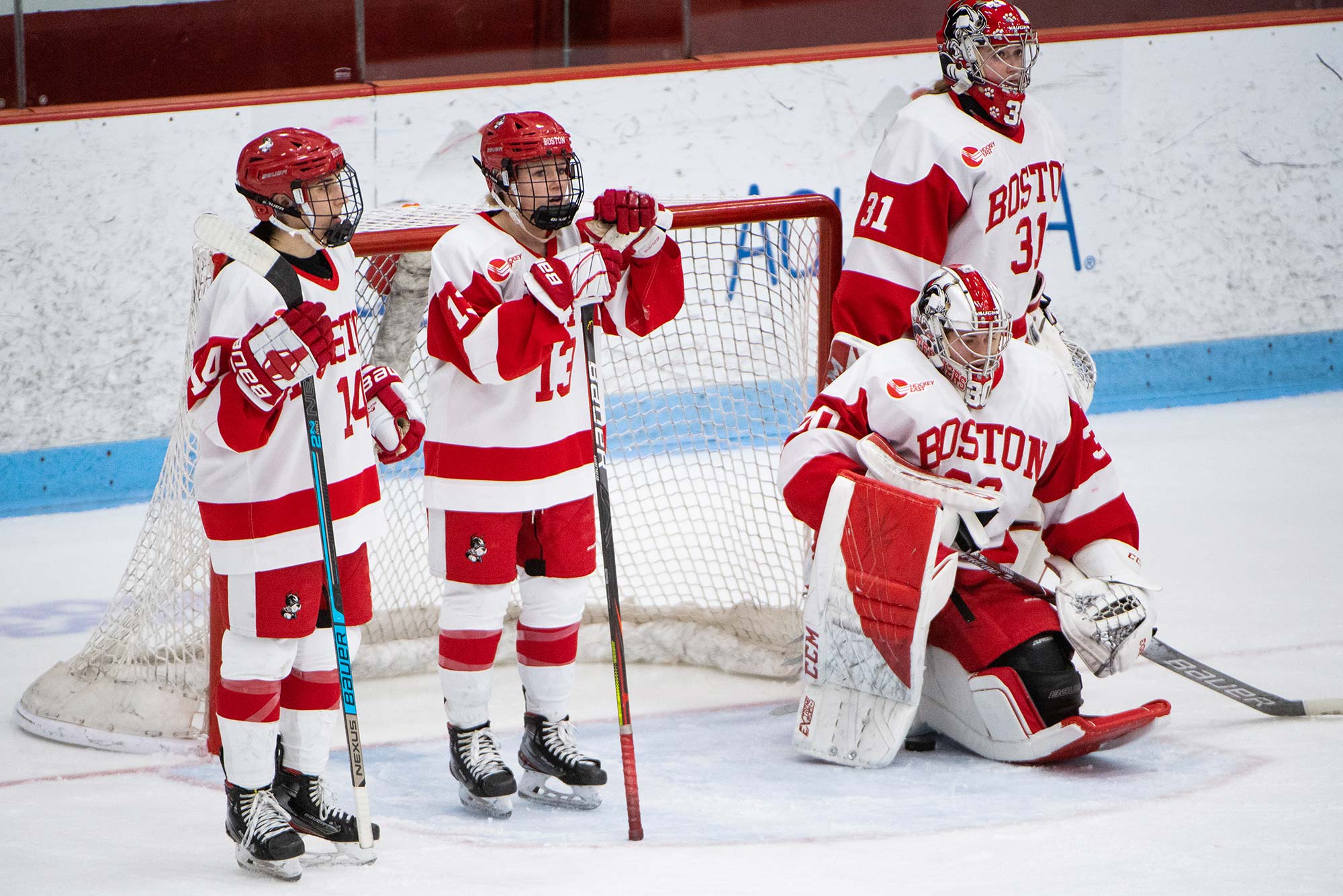 Just when the BU women’s ice hockey team’s defense of their Beanpot tournament title was looking unlikely, Sammy Davis (CGS’17, Sargent’19, Wheelock’20) emerged in exactly the right place at the right time. The cocaptain of ninth-ranked Boston University knocked in the tying goal with just 22.8 seconds left to play in regulation.

But despite a valiant tussle with third-ranked Northeastern (25-3-2), the Terriers (20-6-4) fell 4-3 in double overtime in the 42nd Women’s Beanpot Tournament championship game Tuesday night at Walter Brown Arena, before a record women’s Beanpot crowd of 1,790.

“I’m pretty sure you witnessed a classic hockey game there, two teams that played their hearts out,” BU women’s head coach Brian Durocher (Wheelock’78) said following the game. The players “displayed an awful lot of talent, compete, toughness, and made their institutions proud, win or lose.”

It was the first ever double-overtime women’s Beanpot final, with Northeastern’s Lauren MacInnis putting home a power-play winner with 3:57 left in the second overtime to capture the program’s 17th Beanpot title.

“I think the light should shine on the hockey players that played here tonight,” Durocher said. “Fantastic young ladies play on both teams, and I think throughout the year they’ve proved to be highly competitive teams.”

The Terriers entered Tuesday night’s game on the heels of last year’s first Beanpot win as a varsity team. They began strong in this year’s tournament, with a 4-0 win over BC in the semifinal last Tuesday. Northeastern topped 10th-ranked Harvard 3-1 in the first game of the semifinal to set up a dogfight in the championship round.

The Huskies had proven a formidable foe throughout the season, with BU losing all three of their regular season meetings, although two of those games were decided by a single goal.

“The script is pretty similar, that both teams are fighting like crazy,” Durocher said.

The Terriers scored first in a championship game that saw three different ties. Skating shorthanded didn’t stop Kristina Schuler (Questrom’21) from breaking through the Northeastern defense for a goal at 4:55 of the first period. Her eighth tally of the year was unassisted, as she caused a turnover and salted in one-on-one with Northeastern goalie Aerin Frankel, beating her with a backhand.

Northeastern rallied and took the lead on the strength of two goals by Chloe Aruard, her 19th and 20th of the season. The sophomore tied it with 2:28 remaining in the first period, and added her second goal at 6:33 of the second.

Things got chippy, and Breanna Scarpaci (Sargent’20) and Huskie Skylar Fontaine both got penalties midway through the second period. Scarpaci picked up two minutes for cross-checking, but Fontaine got a five-minute major and game misconduct for roughing—and was ejected.

The Terriers seized the moment and took advantage.

Abby Cook (Sargent’20) connected on the extended power play for her ninth goal of the season with 7:58 remaining in the period. Davis and Kaleigh Donnelly (CAS’22) picked up the assists on Cook’s shot from just inside the blue line to tie the game at two goals each heading into the third period.

Northeastern went up 3-2 on freshman Jess Schryver’s power play goal. Schryver collected a rebound and put it past Terrier goalie Corinne Schroeder (Sargent’21) with 5:19 remaining in the third period. But the goal did not deter the Terriers, who responded late. Davis notched her tying goal with 22.8 seconds left in regulation, tipping home a Cook shot. Nadia Mattivi (CAS’23) sent a cross-ice pass to Cook, who fired a shot to Davis. The redshirt senior struck for her 15th goal of the season to tie it at 3-3.

The NCAA-mandated five-minute overtime came and went without a goal. Courtney Correia (CGS’20) took a penalty with 4:36 left in the second, sudden-death overtime. The Huskies took advantage, lighting the lamp with 3:57 to play, when MacInnis found enough space to win it.

The Terriers and Huskies battled to another one goal game, with Northeastern coming out on top.

The BU women’s loss to Northeastern followed the Huskies’ heartbreaking 5-4 defeat of the men’s team in double overtime Monday night at TD Garden. The Terriers will have to wait another year for a shot at earning their first-ever Beanpot sweep.