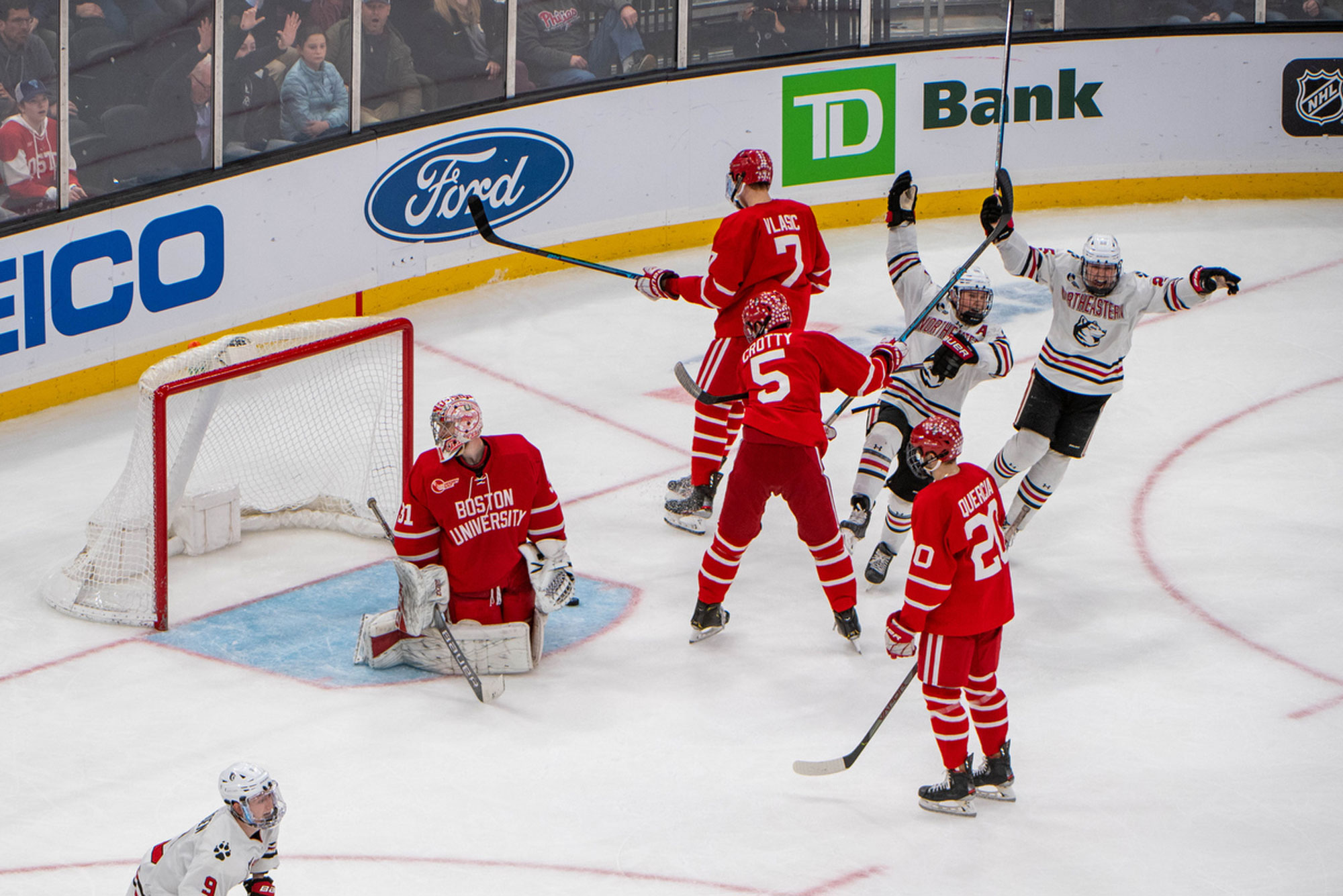 It looked over. It felt over. The Most Valuable Player ballots for the 68th Beanpot Tournament had been handed out and collected, and Northeastern was one second away from celebrating its third straight title with a comeback 4-3 victory over Boston University Monday night.

One second—1.2 seconds to be exact.

The BU freshman earned his place in Beanpot lore with his buzzer-beating goal to tie the game 4-4 and send the teams into overtime before a tournament record crowd of 17,850, in one of the Beanpot’s greatest finishes ever. But in double overtime, it was the Huskies who prevailed, 5-4, for their third straight, and seventh overall, Beanpot.

Zegras potted his second goal of the game after a pinpoint pass across the goal from Jake Wise (CGS’20), taking advantage of BU’s ability to keep the puck in its offensive zone in the waning seconds of regulation with Northeastern (15-8-3) trying to clear. BU (10-9-8) did just enough to pressure the Huskies with tenacious forechecking until Zegras found the back of the net, and then skated away from his ecstatic teammates while screaming and tugging his jersey in celebration.

That was a memorable moment—another young star shining on the big stage. But Northeastern’s Jordan Harris put it all to rest just under 15 minutes into the second overtime with a long wrist shot on the power play, leading to a flood of white Husky jerseys rushing on to the ice to mob one another. BU will have to wait until 2021 to nab its first Beanpot since 2015.

It was a seesaw contest throughout.

The game started with so much promise for BU: two quick goals during the first eight minutes of the first period. But 12th-ranked Northeastern showed its strength, delivering a flurry in the second period with four speedy goals that left the Terriers stunned and trailing 4-2 entering the final period.

Wise got the Terriers going early with a second effort tally. His goal came at 2:49 of the first period, redirecting a rebound from point-blank range. Matthew Querica (CGS’20) and David Farrance (CAS’21) picked up the assists on Wise’s second career tally.

Zegras uncorked a ferocious wrister on the power play, putting BU up 2-0 at 7:50 of the first period. Patrick Harper (COM’20) garnered the assist on Zegras’ ninth goal of the season.

The Huskies rallied fast in the second period, scoring their four goals in the first 12 minutes of the frame. They turned it up a notch, skating with extra energy. They also took advantage of the opportunities BU handed them.

Northeastern leading scorer Tyler Madden scored his 18th goal of the season at 2:53, Aidan McDonough added the tying tally at 5:51. Then Northeastern scored two power-play goals. Zach Solow put in the go-ahead tally at 9:42 of the period, and Grant Jozefek made it 4-2 at 11:23. The Huskies’ second period goals came in a span of less than nine minutes.

After stopping 35 shots in the semifinals, Terrier goalie Ashton Abel (CAS’23) struggled in that second period, making nine total saves before being replaced by Sam Tucker (MET’20) after the fourth goal. Tucker made 18 saves.

But BU didn’t let up. Needing a quick goal to open the final period, Farrance got it, firing a quick strike tally from the point to cut the deficit to 4-3 at 1:56 of the third period. Farrance’s power-play goal, his 13th of the year, was assisted by Harper and Logan Cockerill (SHA’21).

As the final seconds ticked away with Northeastern clinging to its one-goal lead, the Huskies couldn’t clear the puck out of their zone for nearly a minute, and Zegras finally found the net, sending Terrier fans into a frenzy (the goal was briefly reviewed to make sure it beat the buzzer). Wise and Farrance were credited with assists on the tally.

After the initial five-minute overtime, came a second. Northeastern’s Jordan Harris beat Tucker for the winner 14:33 into the period.

The two teams will compete again, as three of BU’s final eight regular season games are against Northeastern.