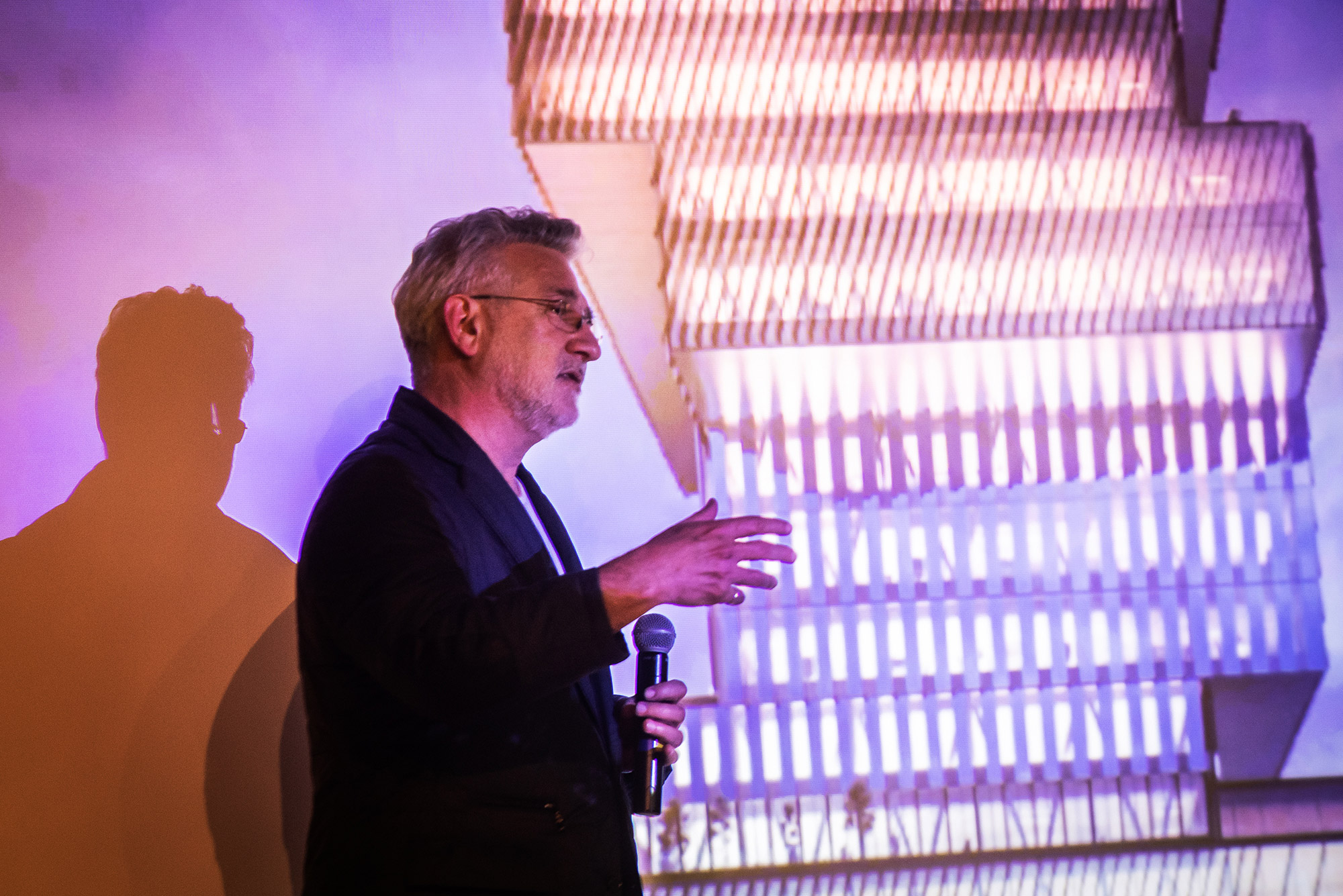 Luigi LaRocca of KPMB Architects, with a rendering of the proposed Center for Computing & Data Sciences, described the project Tuesday at a public forum on potential construction disruptions. Photo by Jackie Ricciardi

Just how much might you be rattled by construction of BU’s Center for Computing & Data Sciences? Bryan Sweeney, a geotechnical engineer consulting on the project, dispensed with vibration measurements only an engineer would understand and instead offered an analogy to attendees at an information forum Tuesday afternoon.

If you’re working or studying at Sargent College of Health & Rehabilitation Sciences, next to the construction site on the current parking lot at the corner of Granby Street and Commonwealth Avenue, vibrations from shoring up the excavated hole with sheeting will be equivalent to “possibly a 200-pound person like myself jumping up and down on the floor,” Sweeney said. “You will feel it, and it will be discomforting within about 50 feet of where you are.”

B and U are the first two letters in “build,” and University and project leaders described potential construction disruption from building the center, and what they’ll do to ease it, at the forum, held in the George Sherman Union Conference Auditorium. Assuming the project passes a final city review this winter, groundbreaking will begin in spring 2020, with a targeted completion in summer 2022.

Tom Spall, Suffolk Construction’s superintendent for the project, said the busiest period will be between February and September 2021, when the facade is enclosed and “noise certainly gets louder.” Among the safety measures throughout the job will be a covered walkway in front of the site, similar to the one used during construction of the Rajen Kilachand Center for Integrated Life Sciences & Engineering.

Police will direct pedestrians as trucks enter and leave the site, Spall said, especially during the excavation phase, when workers remove dirt from the site. “There are probably 15 trucks a day that are going to make 3 rounds, and 45 or 50 trips, through the site.” After that, as workers pour concrete, a similar number of trucks per day will visit about 20 minutes apart. A designated drop-off point for patients arriving for appointments at Sargent College will also be provided beyond the covered walkway.

“I give you a personal commitment that I’ll do everything with my staff, my crew to keep the job safe, keep the workers and the public safe,” he said. “We take it very seriously.”

The sheeting work will throw off 2 to 3 minutes of vibration every 15 minutes during the process, which “takes somewhere between four and six weeks,” starting next May, Sweeney warned. On the plus side, the foundation is designed so that pile-driving is not required.

Another disruption passersby will contend with is of an olfactory nature: the smell from disrupted marsh deposits on the site, remnants of when the Charles River flowed there centuries ago.

“You will notice, if it’s the middle of the summer and they’re digging down, the hydrogen sulfide odors that come from the organics,” Sweeney said. Workers will spray the organics with a deodorizer to mitigate the smell.

During the question period, Karl Kirchwey, a College of Arts & Sciences professor of English and associate dean of faculty, humanities, said current drilling of geothermal wells on the site has made some offices and classrooms on the east side of CAS “uninhabitable for large stretches of time.” He asked if relocating some faculty during intense construction would be possible.

“We don’t have the space to move people around,” answered Walt Meissner (CFA’81), BU associate vice president for operations. “We have talked about identifying certain areas in buildings as sort of sanctuary places for certain times of the year. [The noise] is not going to be continual for three years.… For the majority of the project, I would expect it to be tolerable.”

Jean Morrison, University provost, asked Kirchwey to contact her office if noise became intolerable, and “we will work through those specific examples.”

Chad Rodriguez (Wheelock’21), who lives in Warren Towers, asked how much the construction would increase existing street noise.

“The noise will be lower than allowed by the Boston noise ordinance,” Sweeney said.

“That doesn’t help you,” he added to laughter. The center’s construction noise would be “intermittent, but just as loud if not louder” than current levels, he said. Work will begin at 7 am and end at 6 pm, Monday through Friday, Meissner said, with occasional Saturday work.

Another questioner asked about the loss of the Granby Street parking lot. Meissner replied that University surveys show parking spaces at several locations, including Agganis Arena and 808 Comm Ave, are underutilized and available for drivers.

A project website will be created through the University to provide updates, a live camera feed, and other information. And Suffolk Construction senior project manager Chris Kenney gave out his cell phone number (617-671-8669) as point man for communications.

Once completed, the Center for Computing & Data Sciences will surpass the StuVi II student residence as the tallest building on campus. The almost 346,000-square-foot science citadel, resembling a stack of books, will be fossil fuel–free, and it won several city approvals this past summer.

The center’s siting—across Comm Ave from the Kilachand Center for Integrated Life Sciences & Engineering and between Sargent College and the Stone Science Building—is intended to spur collaboration among students, faculty, and staff across disciplines.

Dennis Carlberg, associate vice president for university sustainability, told the audience that the center will be the largest fossil fuel–free building in Boston, and it’s an essential part of BU’s plan to be carbon-neutral by 2040. That would be 10 years before the city of Boston’s own target date, and major institutions like BU “need to beat the city,” Carlberg said, not for competition’s sake, but for Boston to be able to meet its 2050 deadline.