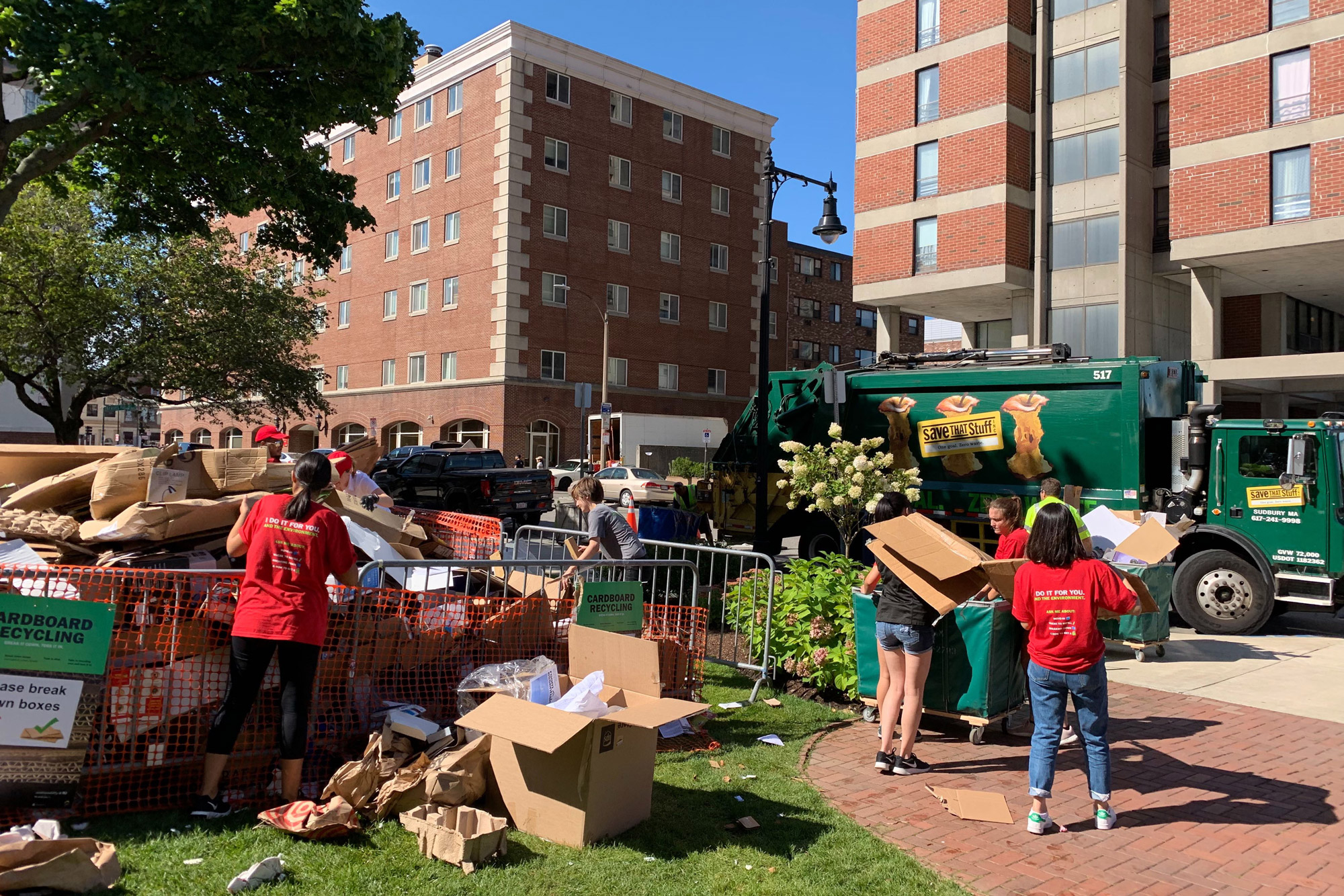 BU produces more than 9,000 tons of solid waste annually, enough to fill Marsh Plaza to the roofs of its surrounding buildings every three months. And more than half of that trash ends up in an incinerator or a landfill. It’s now time to change that.

Sustainability@BU has convened a Zero Waste Implementation Task Force that wants your ideas about how the campus can shrink its trash output further and lessen BU’s carbon footprint. The ideas will be incorporated into the task force’s five-month analysis and lead to recommendations to University leadership. Whether it’s carrying your own fork or straw, shunning plastic, or coming up with an easier way to recycle or compost, now is the time to share those ideas, grand or small. The deadline for comments is November 30.

“There’s an infinite number of ways to achieve zero waste,” says Kaity Robbins, BU’s Zero Waste manager. “We’re trying to act on the priorities of the community because that’s the way we’re going to get the most support for our recommendations.”

BU’s Zero Waste goal is to divert 90 percent of the University’s trash from incineration or landfills by 2030, building on its previous success bringing waste diversion rates from 3 percent in 2006 to 37 percent in 2016. BU’s Climate Action Plan, a $141 million blueprint for reducing the University’s carbon emissions, calls for the improvements, setting an aggressive University-wide agenda to reduce those greenhouse gas emissions to net zero by 2040.

A lot of money is at stake. Waste disposal costs BU about $1.6 million a year, and as the Climate Action Plan states, “There is abundant opportunity for further progress.”

Dennis Carlberg, associate vice president for University sustainability, says the timing is also right to reimagine how the University and its students, faculty, and staff think about trash. China, the world’s largest importer of recycled materials, enacted new bans and tougher contamination standards last year on the waste it buys, causing a global glut. (China had been the destination for about 40 percent of US paper, plastics, and other recyclables.)

Carlberg says part of BU’s Zero Waste effort will be obtaining data and more detailed information from its waste hauler about how much of the University’s recycling may be contaminated or end up in an incinerator or landfill. He says recycling is available in the basement of many dorms, but not on every floor, and offices could be better about limiting the printing of material. It’s an opportunity to leverage BU’s buying power and change the marketplace.

“Fundamentally, recycling and waste are an expense and we need to figure out how to optimize our expenses through this process,” Carlberg says. “A big part of this is developing a better and more coherent infrastructure and a logistical plan for how we handle waste and recycling on campus, really rethinking how we do all this, as well as rethinking our supply chain.”

Changing a culture of consumption, one that prizes one-hour doorstep delivery despite its excessive packaging and plastic, is no small task. And it’s especially difficult competing with Instagram influencers selling the latest and greatest clothing, makeup, and furniture at your fingertips, on YouTube. But the Youth Climate Strike in September, when millions of young people worldwide gathered to protest a lack of progress toward environmental goals, demonstrated the level of concern and a willingness to take action.

Carlberg says society cannot recycle its way out of the consumption problem. And the key to change here is building a coalition of involved students, faculty, and staff. Some small changes have already begun: last year, prodded by students, BU phased out nonrecyclable plastic straws and replaced them with paper straws.

“The whole community has got to be a part of this,” he says.

Buildings like Chou Hall at UC Berkeley’s Haas Business School, a model of Zero Waste innovation, show what can be done. It’s the first building of its kind to divert 95 percent of its waste—there are no public trash bins, only recycling and compost receptacles. Students, faculty, and staff who use the building treat it like camping: “Pack it in, Pack it out.” It also received a TRUE Zero Waste Certification last year, a new designation similar to a LEED certification for energy efficiency.

Gary Liss, a California consultant who helped mobilize the Zero Waste movement, was hired by BU to guide its efforts. He says the lack of trash bins may inconvenience some people, but that’s not necessarily a bad thing.

“The behavior change needed for Zero Waste is to get people to think before they toss,” Liss says. “They need to think, why did I create this garbage in the first place. This gets people to stop and think, and that’s really key.”

The Zero Waste Task Force wants to hear about those moments, says international studies major Denise Hagen (CGS’19, CAS’21, Pardee’21), who participated in two recent Zero Waste forums held by the University. Her concerns about climate change are guiding not just her career choices (she hopes to work internationally helping countries struggling with environmental devastation related to weather changes), but her day-to-day life. She avoids all single-use containers and avoids plastic.

As BU’s new Student Government director of environmental affairs, Hagen is also encouraging students to take a look at their own trash output, audit it, and see where they can improve. “Plastic for me is super unnecessary,” she says. She even avoided so-called fun-size candy bars this Halloween because of the excess wrappers.

She says that at the recent Zero Waste forum, some students questioned whether small individual changes could make a meaningful difference, so she thinks it may be a good idea for the task force to recommend requiring incoming freshmen to attend a sustainability program during Orientation to help them understand that they can make a difference.

“It’s really exciting to see the school that I go to is putting time and effort and resources toward this,” Hagen says. “Everybody has a different definition of what sustainability is. If we’re going to do it on campus, we need to have the same information and the same goals.”