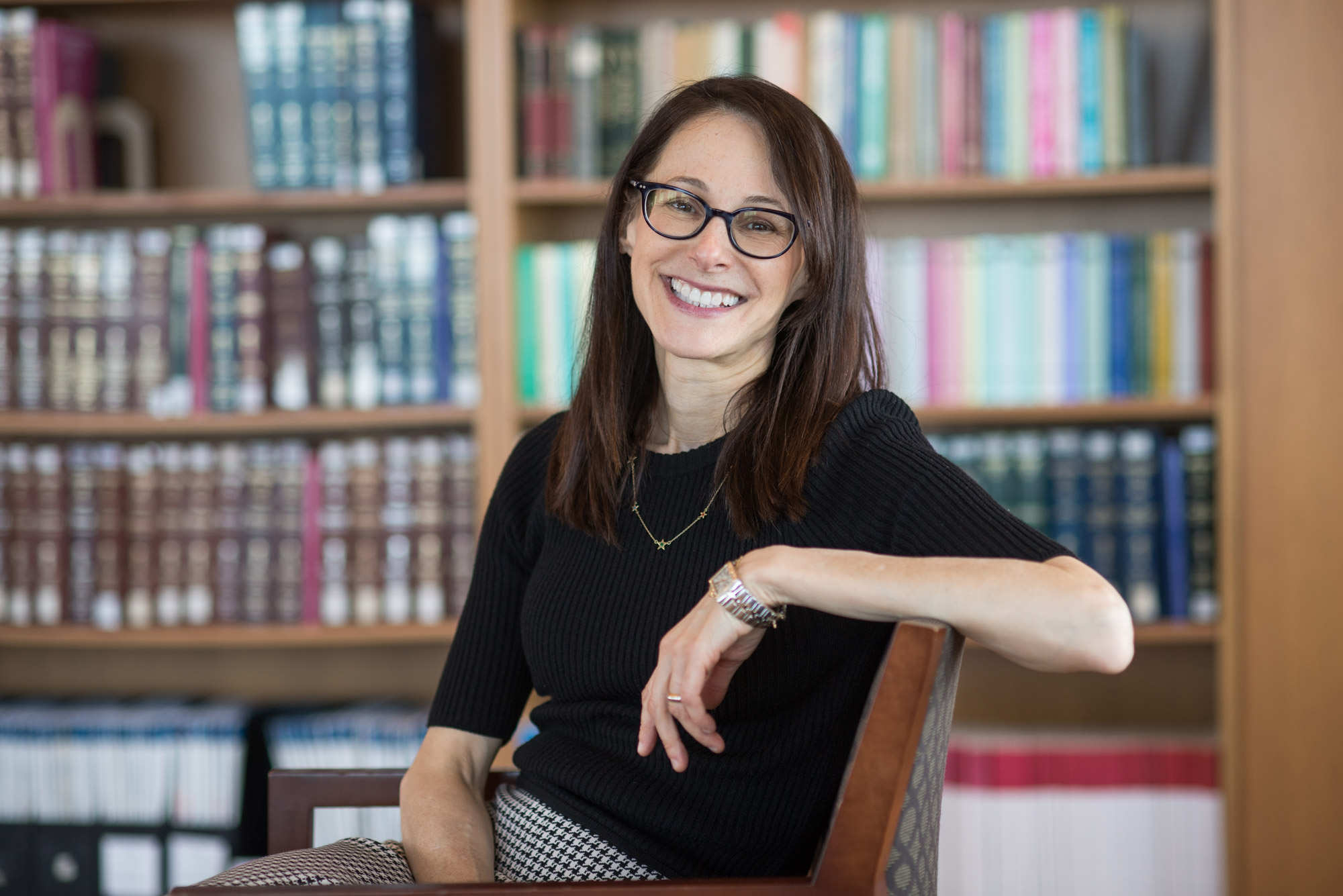 School of Law Professor Danielle Citron, a leading privacy scholar who has done pioneering work in combating hate crimes and other abuses in cyberspace, has been named a 2019 MacArthur fellow. Photo by Cydney Scott

“Genius” grant comes with $625,000 to further her research on privacy rights and hate crimes in cyberspace

Citron, a School of Law professor of law, and the other 25 new fellows, whose names were announced Wednesday morning by the John D. and Catherine T. MacArthur Foundation, will each receive a $625,000 no-strings-attached “genius” grant, spread over five years, in recognition of their exceptional creativity, significant achievements, and promise for future advances. For researchers, writers, scientists, entrepreneurs, and all recipients, it is one of the highest honors they can receive.

Citron, who joined LAW in July 2019 and is a member of the Hariri Institute for Computing and Computational Science & Engineering Cyber Security, Law, and Society Alliance, says she was stunned when John Palfrey, MacArthur Foundation president, called her a couple weeks ago with the news. “I screamed,” she says. “I fell on the floor. It’s crazy, right? Ta-Nehisi Coates and Bryan Stevenson are MacArthur Fellows—I can’t believe I’m in the same group.” (Writer Ta-Nehisi Coates received a MacArthur fellowship in 2015 and public interest lawyer Bryan Stevenson, who founded the Equal Justice Initiative, in 1995.)

“At first I thought I was being punked, and I was sure it was my privacy friends who were teasing me,” she says. “And then I realized it was John Palfrey’s real voice. I’d heard him give talks on YouTube.”

An advocate and scholar, Citron is vice president of the nonprofit Cyber Civil Rights Initiative, whose mission is to combat online abuses that threaten civil rights and civil liberties, and the author of the widely cited Hate Crimes in Cyberspace (Harvard University Press, 2014). “While she has explored a range of privacy and digital rights issues over the course of her career,” the foundation said of Citron, “much of her work has centered on gender-based discrimination in online environments, where women are disproportionately targeted with threats of a violent and sexual nature.”

Citron is also the author of more than 30 major law review articles on privacy, cyber harassment, and how to balance freedom of expression with civil rights and civil liberties on the internet. She says she will use at least some of her MacArthur grant to write her second book, on sexual privacy.

“We are thrilled that Professor Citron has been named a MacArthur Fellow,” says Robert A. Brown, president of BU. Citron joins Nancy Kopell, a William Fairfield Warren Professor and a College of Arts & Sciences professor of mathematics, as BU’s only current MacArthur Fellows. “These awards recognize an individual’s potential to make transformative changes. We’re very proud that Professor Citron has been recognized as a member of this highly selective group.”

A University of Maryland professor of law before moving to BU, Citron says her admiration for Angela Onwuachi-Willig, dean of LAW, and her work on critical race theory, was one of the reasons she wanted to come to BU (the Hariri Institute’s Cyber Alliance was also a big draw).

Elated over the news of Citron’s MacArthur award, Onwuachi-Willig points to Citron’s prescience: she was calling for legal remedies to cyber abuse a decade ago, when hardly anyone outside a small group of privacy scholars was listening.

“People who study technology and cyberlaw are often ahead of the rest of us; Danielle is ahead of them,” says Onwuachi-Willig. “She sees the future and recognizes its implications.”

The foundation notified BU Tuesday afternoon, prior to the Wednesday announcement. Early Wednesday morning, Onwuachi-Willig, Stacey Dogan, and Anna di Robilant, LAW associate deans, surprised Citron at her home in Brookline with red balloons, flowers, a coffee cake, and coffee. When they rang her doorbell at 6:50, Citron appeared in her sweats.

“We screamed and said, ‘Congratulations!’” Dogan says. “She was so excited to see us. I think she’s still a little shell-shocked. We had a big group hug. We went inside and just kept hitting refresh on our phones on the MacArthur page until the announcement came up at 7:01. Then we shouted and started fielding texts and phone calls from around the country.”

Citron snapped a selfie of the four of them, and sent it to her husband, Lou Citron, who was in California on a business trip. “We were already over the moon about her,” says Dogan. “This is just the icing on the cake.”

Today, Citron’s guidance on cyber civil rights and the law is sought after by lawmakers in Washington as well as by Facebook and Twitter (she is an unpaid advisor for both). In June she testified before the House Permanent Select Committee on Intelligence about the threat to democracy—and the 2020 presidential election—of manipulated media, particularly deepfake video and audio. In July she delivered a TED talk on deepfakes at the global TEDSummit in Edinburgh—that video is now approaching a million views.

“Many legal scholars are studied by a relatively narrow group of colleagues in their particular field,” says Onwuachi-Willig. “Danielle is cited by experts from a broad range of industries and areas of the law, because in this digital age, the issues she studies are pertinent to everyone and everything.”

Referencing Citron’s 2008 Washington University Law Review article “Technological Due Process,” Dogan, associate dean for academic affairs, says that Citron “argued that local government decision makers, by increasingly relying on opaque algorithms to do their work for them, were denying consumers and citizens due process. Today everyone is talking about tech due process and algorithmic bias.”

Citron’s Yale Law Journal article on sexual privacy, published in May 2019, “will be excerpted in every casebook about privacy,” Schwartz says. “It reminds us why we must care about the way our information is collected and our photographs are shared: it is because we must preserve the freedom to make decisions about intimacy.”

Schwartz and other legal scholars around the country say that Hate Crimes in Cyberspace is already a classic in the field.

“Danielle’s book is groundbreaking, not least by its clear-eyed reflection on the relationship between disruptive technological innovation and previously established legal cases and theory,” says Jonathan Zittrain, faculty director of Harvard Law School’s Berkman Klein Center for Internet & Society. “Danielle takes on the profoundly difficult question of whether and how legal frameworks around civil rights, honed over decades or centuries, could be brought to bear on the novel-seeming domain of cyberspace. It’s a bold admonition to those who, considering the extent to which the internet has reshaped social and political life, would be inclined to disregard or cast aside the hard-won lessons at the heart of those frameworks.”

Dogan says she finds both Citron and her work inspiring. “She impressed me immediately as not only brilliant,” Dogan says, “but incredibly committed to students, her colleagues, and doing good in the world.”