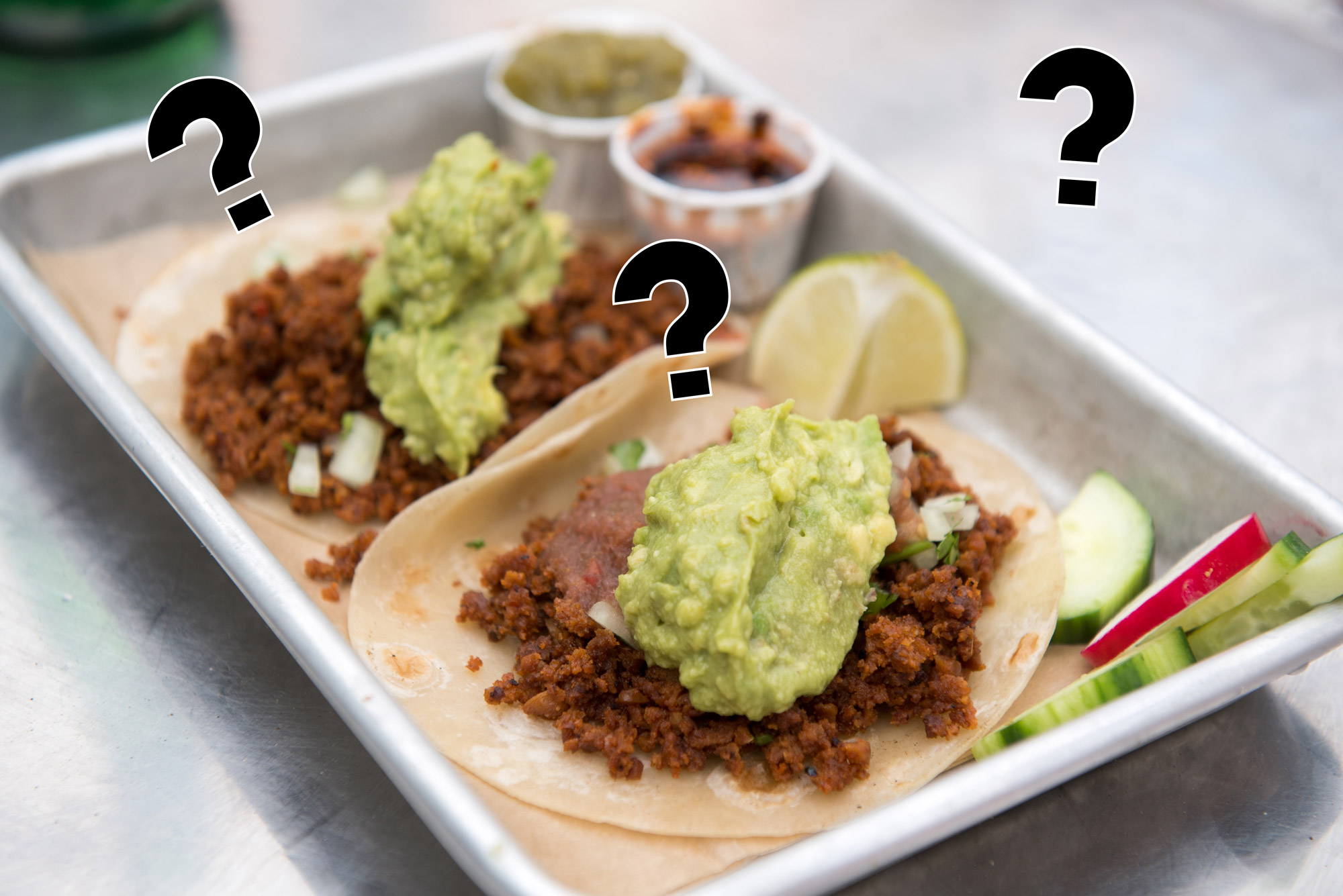 The vegan chorizo tacos served up at Taqueria El Barrio.

Students are demanding foods that are good for them, and for the planet. So what’s a college like BU to do?

The vegan chorizo in a taco served up at Taqueria El Barrio on Comm Ave poses a delicious dilemma.

The red, granular imitation chorizo looks just like Mexican-style pork sausage, and yet it cannot remotely be described as a health food. What is it made from? Nothing on the menu indicates its ingredients and the staff knows only that the main ingredient is soy.

Mystery (un)meat and new vegan faux meat options abound around the BU campus, from dining halls and the freezer section of supermarkets to Dunkin’ shops, which will roll out a new “Beyond Sausage” breakfast sandwich in early November.

With growing numbers of millennials and Generation Zers demanding affordable, cruelty-free foods and weighing the environmental impact of their day-to-day eating choices, there are now more options than ever, from Impossible Burgers and Incogmeato brand chicken nuggets to New Wave Foods lab-cultured “shrimp,” which it bills as “shellfish evolved.” And college and university campuses have become ground zero for the mock-meat movement.

“If people gave up meat, it would have such a big impact on the environment,” says Hannah Ferguson (CAS’23), who decided to become a vegetarian when she arrived at BU. “I don’t miss meat.”

“It’s definitely super, super easy now to be vegan,” says Gianina Padula (Sargent’21), who says dining options were one of the factors she weighed in choosing a college. “It’s made me more conscious of what I put in my body.”

But since colleges like BU, with 11,000 students on a meal plan, are where questions get asked, and often answered through years or decades of research, here are two to consider: what if fake meat isn’t so good for the planet after all? And what if it’s not that healthy either? What if it’s a trend, like the fat-free foods deluge of the 1990s that gave us potato chips made with Olestra and joyless Snackwell cookies?

It’s too early to know the answer for sure, but vegetarianism and veganism have evolved from being a personal health statement to a political one about the planet’s well-being. Sales of plant-based meat rose nearly 40 percent, to $801 million, between 2017 and 2019, according to the Good Food Institute, an industry group. Kara Nielsen (MET’06), vice president of trends and marketing at Silicon Valley–based CCD Innovation, says young consumers are driving the shift, impatient for new ways to address their concerns that traditional agriculture will not be able to support the planet’s food needs without at the same time destroying the planet.

“They’re big consumers of media and [they’ve] seen all the movies and videos that have shed light on the horrors of factory farming, so they’ve been influenced by that,” Nielsen says. “This is a way they can exert power and control using their diet.”

“The future of protein”?

Take the bleeding Impossible Burger, made with red, plant-based heme to make it taste meaty and look more like a burger. It’s now available in grocery stores and at Burger King, and is one of the plant-based state-of-the-art options in BU dining halls, because students are talking about it and demanding it.

And the alternative protein market is growing with companies like San Francisco–based Just using animal cells, not a slaughtered animal, to make “cultured chicken” in a laboratory.

A promotional video even shows Just’s employees eating its engineered chicken foodstuff at a picnic table while admiring a chicken named Ian, whose cells helped create the food they’re eating. Ian struts around the grassy yard, seeming happy to be alive.

It’s surreal, but the industry calls these pseudo chicken nuggets and plant-based burgers “clean meat,” because they are created in a laboratory, not raised in a factory farm. The companies behind the new ventures heavily promote themselves as an environmentally friendly option, as well as a virtuous one.

“Our planet cannot afford to supply the water, fuel, pesticides, and fertilizer that industrialized animal production requires,” the Just website says. “It can’t afford the polluted water or the biodiversity loss. It can’t afford the moral inconsistencies.”

Some research has shown that moving away from livestock and poultry would reduce greenhouse gases. Joseph Poore, a doctoral student studying the environment at the University of Oxford, found that avoiding meat and dairy is “the single biggest way to reduce your environmental impact, not just on greenhouse gas emissions, but on land use, biodiversity loss, water pollution, pesticide use, antibiotic use and a range of other issues.”

Another study, commissioned by Beyond Meat and conducted by the Center for Sustainable Systems at the University of Michigan, found that Beyond Meat’s burgers generated 90 percent less greenhouse gas emissions, among other environmental benefits.

The drawbacks of red meats and pork, as well as processed meats like salami and frankfurters, which the World Health Organization classifies as carcinogenic, are well documented.

But fake meats also come with many health and environmental unknowns that will take years to understand. An article by researchers at Harvard’s T. H. Chan School of Public Health that looked at whether plant-based meat alternatives can be part of a healthy and sustainable diet was published in the August issue of the Journal of the American Medical Association. Their conclusion: the answer remains far from a given due to a lack of rigorously designed and independently funded studies.

Take heme, the much-publicized ingredient in the Impossible Burger that the company says “makes meat taste like meat” and “is “something we’ve been eating and craving since the dawn of humanity.” Impossible Foods derives its heme from soy plants using a fermentation process and genetically engineered yeast.

Sean J. Elliott, a College of Arts & Sciences professor of chemistry, a heme chemist, and a vegetarian, says heme is a common molecule used in biochemistry research and is found not just in animals and soy, but in insects and bugs that don’t necessarily taste like meat. The heme that’s used by Impossible Foods isn’t just heme—it’s heme delivered to your burger using a heme-binding protein called leghemoglobin. That raises questions for him about whether it’s truly the factor responsible for the meaty craveability of the product.

Although he says he’s enjoyed Impossible Burgers on a couple of occasions, he also says the fermentation process used to create heme leaves behind a “cocktail of leftovers” along with leghemoglobin if the product is produced at an industrial scale.

“It’s easy to stay focused on the red heme, because it’s pretty. As a chemist, I have to think so,” Elliott says. “And for marketing, it gives you something easy to focus on instead of some of the other more complicated intellectual property that [Impossible Foods] doesn’t necessarily want all their competition to know about—like how you make those yeast strains do the stuff that they do.”

From a health perspective, Salge Blake says, many alternative meats are highly processed and made with unfamiliar ingredients, something health professionals have steered people away from for decades. A Burger King Impossible Whopper and a regular Whopper have about the same calories (630 vs. 660) and both contain unhealthy amounts of saturated fat and salt and more saturated fat than a regular hamburger made from lean beef.

It can also be tricky to discern what to eat when even traditional health advice about meat is called into question. Last month, a surprising study challenged decades of nutrition advice by telling consumers that forgoing red meat and pork offers only small health benefits, contradicting decades of nutrition advice and sowing confusion. On the heels of the report, it was revealed that the study’s lead author, Bradley C. Johnston, an epidemiologist at Canada’s Dalhousie University, has funding ties to the meat and food industry.

Salge Blake recommends—this will sound familiar—a balanced diet rich in vegetables and fruits as well as lean meats and proteins. And she cautions against taking an extreme approach when it comes to health trends that also claim to save the planet, because it can create anxiety over food choices.

“I’m not a fan of the ‘clean-eating’ thing, because it makes people crazy,” she says. Students are thinking, “I can’t have all these worlds coming at me at one time.”

Christopher L. Bee, BU culinary director, has a big job. The University has more than 11,000 students on its food plan, and they are vegan, vegetarian, carnivore, pescatarian, and increasingly, flexitarian. (No fruitarians yet. Yes, that’s a thing.) Keeping everyone satisfied is a challenge, especially when students are ranking colleges by which ones have the best dining halls.

Bee offers Impossible Burgers and a wide variety of vegetarian and vegan dishes, as well as organic, fair-trade, free-range, and sustainably harvested foods. There are dining halls that offer as many as 10 different types of milk and milk substitutes, with oat milk the latest addition.

“People are less afraid of the word vegan,” says Bee, recalling the era when tofu and seitan seemed exotic. “But laboratory food isn’t what we like to do.”

He says he’s interested in offering vegetarian fare that’s nutritious and familiar, and he’s recently offered a special vegan-vegetarian station training class for Dining Services chefs. And he’s got another on plant-forward cooking planned. (According to Plant-Forward Global 50, plant-forward is “a style of cooking and eating that emphasizes and celebrates, but is not limited to, plant-based foods—including fruits and vegetables.”)

The University already sources more than 20 percent of its food from local farmers, more than 80 percent of the seafood it serves is certified as traceable or sustainably caught or farmed, and nearly 20 percent of its meat and poultry products are certified as humanely raised. Ground beef, hamburgers, and hot dogs are from grass-fed animals, pork is from gestation crate-free animals. Find a full list here.

It will be college and university researchers who will ultimately untangle the environmental and health benefits, if any, related to the new meat substitutes hitting the market. But Bee, himself a carnivore, says he thinks the vegan meatballs cooked by his chefs at Fresh Fuel at Granby Commons compete favorably with meat and vegetarian options, and they’re cooked using eggplant, garlic, and lentils and are “very flavorful.”

“We do serve the Impossible Burger, but we can get the same results using food, while still making a difference,” he says.

There are 14 comments on Fake Meats Are Hot, but Are They Healthy?

Fake Meats Are Hot, but Are They Healthy?
14
share this