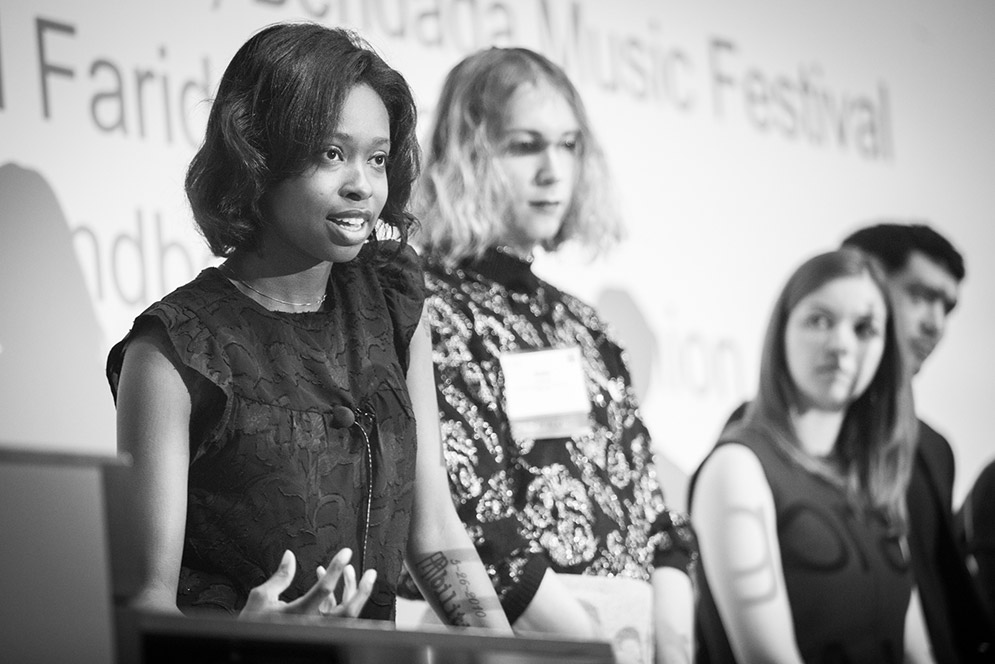 How do you create meaningful impact through innovation? Seeking answers to that question, more than 300 students from Boston University and other area universities and colleges trudged through Saturday’s snowstorm to make it to IDEA 2019, a one-day conference headlined by entrepreneurs who are current BU students or alumni.

Organized by Innovate@BU, which enables and encourages students to embrace an entrepreneurial mind-set and learn the skills to translate their ideas for the real world, IDEA 2019 featured entrepreneurs sharing the peaks and pitfalls of their own innovation journeys as well as workshop tracks designed to foster conversations around specific issues they’ve faced.

Despite the wet snowflakes outside, attendees were in sunny spirits through the day, engaging in presentations with hearty “Woos,” loud clapping, and lots of follow-up questions. Everyone seemed to share an interest in helping new ventures take off in ways that benefit people and the planet. BU Today was there and shares some of the inspiring things heard from entrepreneurs.

1. “I was lacking many skills that I needed to succeed, but I never stopped moving forward,” says Inês Andrade (CFA’18), founder and director of the annual Bendada Music Festival, a summer event in Bendada, Portugal, that has attracted more than 100 student musical performers and 4,000 attendees since Andrade kicked it off in July 2016.

Growing up, Andrade visited her grandparents in Bendada and developed a special affection for the small village, but as she grew older she began to understand that the village was burdened by the effects of a slow economy. She also noticed the joy that music sparked in Bendada’s residents. Putting two and two together, she orchestrated a music festival with the goal of making Bendada a destination for music-lovers and world travelers alike.

2. “Innovation isn’t just about selling products. Around the globe, it’s about connecting people that wouldn’t otherwise work together,” says graduate student Dielle Lundberg (SPH), cofounder of Make Fashion Clean, which upcycles used denim products from the United States and turns them into custom clothing and handbags, the handiwork of talented local artisans and ateliers in Ghana. Lundberg, a “public health person” as they say, says their journey to being a fashion entrepreneur was an unexpected one. But it started out with Lundberg being disturbed by the environmental impact of denim jeans.

The average person in the United States owns seven pairs of jeans, Lundberg says, which equates to 4.8 million pairs of jeans in Boston and 2.3 billion pairs across the country: “What happens to all those jeans when people are done wearing them?” Lundberg says that “65 percent of denim is sent straight to the landfill, where it releases methane, and 25 percent is sent to the incinerator, where it’s burned, releasing carbon emissions and pollution.” As for clothes that are donated? More than half are shipped abroad to west and east Africa, where the influx of American clothing crowds out the market for local clothing makers. “People often donate with the goal of recycling, but the overall impact is negative,” Lundberg says. “We call it ‘denim dumping.’” As an alternative, Make Fashion Clean finds a better use for donated denim through partnership with Ghanian artisans, providing economic benefit to people in the region and turning old American denim into something new.

3. “The word ‘yes’ originally meant ‘may it be,’ [the idea of ] willing something into existence. I’m a chronic yes man,” says Mike Stone (ENG’12), cofounder of Cofab Design, a company that turns ideas into actual objects through a variety of design and fabrication methods.

Stone, who lives inside Cofab Design’s Holyoke, Mass., warehouse (or “warehome” as he says), credits being part of a traveling band playing around “empty bars” in America for a few years for teaching him how to organize people and things. In addition to Cofab Design, he’s also cofounded Brick Coworkshop, a Holyoke-based coworking space that fosters local community and connection through “sensory-filled” street festivals and other networking events. Cofab and Brick, Stone says, each contribute to his ultimate mission, which he also advises other entrepreneurs to adhere to: “Do work, do good, be present.”

4. “You get what you give,” says Brian Zitin (Questrom’17), CEO and cofounder of Reggora, a fully automated appraisal platform for mortgage lenders and appraisers.

Zitin says he believes in the power of cold emails, which he sent voraciously to experts in real estate and appraisals when he was trying to get his app idea to take off as a BU senior. It was a time-consuming endeavor—“I skipped a little bit of classes, sorry BU!”—but it paid off. Although he says only one percent of his thousands of emails ultimately generated a reply, those connections enabled him to learn the industry and connect with experts and venture capitalists. Most people are afraid of getting rejected, Zitin says, but the secret to success is putting yourself out there. He also says, although he doesn’t recommend it, that desperation can be a motivating factor—such as not applying for jobs and instead focusing full-time on a start-up idea. “Burn the ships behind you,” he says.

5. “Intersectionality is key to a more equitable future,” says Ellice Patterson (Questrom’17), the founder and director of Abilities Dance Boston, a professional dance company for people with disabilities. Patterson says intersectionality is the intersection that exists when racism, sexism, ableism, and classism combine and overlap, especially for marginalized people. As a black female with a disability, she has firsthand experience with intersectionality and its impact in her life.

Patterson, who glided onto the stage with the support of a walker, says when thinking of someone with disabilities, most people will think of a white person in a wheelchair. She was always active in dance and the arts growing up, but when her body began to change, she says, she felt dance wasn’t a space for her anymore. “There were literal barriers to entry” to dance studios tucked up narrow staircases on the upper floors of Boston’s brickface buildings. Companies also told her they weren’t willing to modify choreography for her. “They said, ‘This is a professional dance company,’ so I made a professional dance company,” Patterson says. During her presentation, two Abilities Dance Boston dancers, one in a motorized wheelchair, put on a performance filled with graceful turns, partner dance moves, and synchronized arm movements.

It hasn’t been an easy journey, with lots of long nights and early mornings, Patterson says, and systemic discrimination has been a barrier in attracting funds. Potential funders have given feedback that Patterson dances too well to have a disability or that some dancers in the company don’t look like they are disabled at all. “This is illegal,” she says, and it shows a serious “lack of understanding of disabilities.”

6. “Innovation is seeing what has not yet been made,” says nurse practitioner Rebecca Love (CAS’01), who is the global community officer at Ryalto, an app for networking and news among healthcare professionals.

Love’s inspiration struck when she went to her first healthcare hackathon in Boston and noticed that she was the only nurse there. That didn’t make any sense, she thought, because nurses are so involved in clinical care that they should naturally be a big part of healthcare innovation teams. She was spurred to launch the first hackathon for nurses, she says, when she woke up in the middle of the night feeling more passionate about making a solution than about almost anything else in her life. “We went from no one talking about nurses being innovators to Johnson & Johnson now having a new campaign about nurses,” Love says.

Kat McAlpine can be reached at katjmcal@bu.edu.

Six Quotes from BU Entrepreneurs to Ignite Your Innovative Spirit