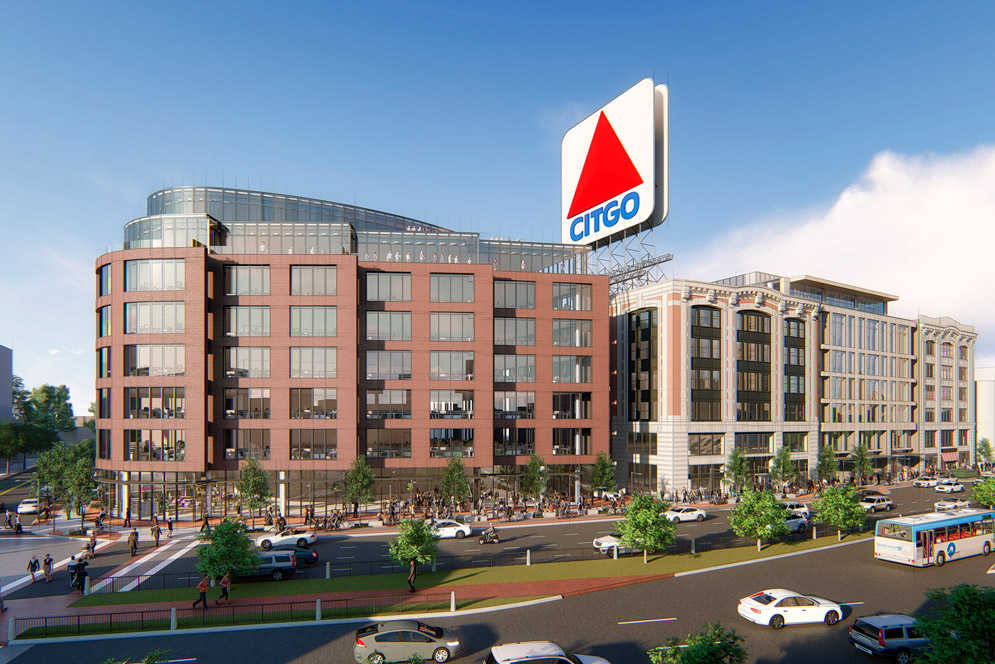 A rendering of what the north side of Kenmore Square will look like when construction on Beacon Street and Commonwealth Avenue is completed. Courtesy of Related Beal

The CITGO sign stays, but almost everything else on the north side of Kenmore Square will change, starting in June.

Developer Related Beal will begin demolition and construction work on the Kenmore Square buildings the firm bought from BU in 2016, from 648 Beacon Street to 541 Commonwealth Avenue, with plans for multiuse development, with retail and restaurants at street level and offices above. The properties include 310,000 square feet of commercial space; some will undergo only interior renovations.

Related Beal plans a town hall–style meeting to present the two-year project to the BU community and answer questions on Wednesday, June 5, from 4 to 5 pm, at the Kenmore Classroom Building, 565 Commonwealth Ave. A second meeting is being scheduled for local residents in coordination with Boston’s Office of Neighborhood Services.

The developer is still discussing with the city when it will begin preliminary steps such as fencing and sidewalk protection, says Alex Provost, Related Beal development project manager, but that work will likely start next week.

Related Beal has created a website to provide project updates; the website also includes a form for submitting comments and questions and phone numbers for Beal project managers.

The buildings at 533-541 Commonwealth Avenue will be the first to come down, beginning in June, to be replaced by a new single eight-story, 130,000-square-foot building with two distinctive glass-walled penthouse floors on top, set back from the edge.

“Our architects, Roger Ferris + Partners, have designed a building that really holds the corner, extending that masonry six-story street wall that you see prevalent across the square,” Provost says. “But the top of the building was focused on a lot, so it does not extend that street wall up to the seventh and eighth floors, and so it was different and unique.”

In a second phase, Related Beal will build a seven-story mixed-use office development at 650-660 Beacon Street, beginning three to four months from now, after final permits are obtained from the city, Provost says. The buildings at 650, 652, and 656 Beacon will be demolished and the new seven-story structure built in their place. But 660 Beacon, home of the CITGO sign, will retain its main structural elements and facade while being renovated to connect to the new building. Its east wall will be removed and its six floors adjusted so they align with the floors in the new construction. It will also be served by the same mechanical services and other infrastructure.

“While it will somewhat look like two buildings, it will act as one,” Provost says.

Last year, Beal and Citgo Petroleum Corporation reached a deal to retain the iconic sign for 30 years. The building plan for 660 Beacon means the sign will remain in place throughout construction.

The two buildings at either end of the project, 648 Beacon and 11-19 Deerfield Street, will receive interior renovations.

Neighborhood impacts will include a perimeter fence at the curb line enclosing existing sidewalks in front of the buildings. A temporary raised, protected walkway for pedestrians will be built outside the perimeter, taking over parking spaces and a bike lane. No vehicle lanes will be closed. Bicycles will have to share a vehicle lane during construction, but a raised and protected bike lane will be included in the new streetscape upon completion. The MBTA Green Line entrance in front of 648 Beacon is outside the construction perimeter and will be unaffected, notes Provost.

Tenants in BU-owned and other buildings on the south side of Bay State Road will likely see significant impacts. Two tower cranes will be erected in the alley behind the buildings: the first will be behind the Commonwealth Building and a second will be placed later behind the Beacon Building. Initial planning documents show parking there could be affected by the construction perimeter, but Provost says that is still being studied and Beal will limit impacts as much as possible.

BU had leased back much of the space in the buildings after the 2016 sale, but has now vacated the premises. Among significant BU facilities in the buildings were the Barnes & Noble at BU Bookstore, now relocated to 910 Comm Ave, and the Center for Anxiety and Related Disorders, which has moved to 900 Comm Ave. A number of staff offices have also been relocated to new locations. As for the future, the University is closely following Related Beal’s retail and office space development and construction planning for Kenmore Square.

Perhaps the most significant non-BU tenant in the affected buildings is the US Post Office at 11 Deerfield Street, which closes on June 14. Box holders and mail and package pickup will be located at the Astor Post Office, at 207 Mass Ave, near Symphony Hall, for now. A press representative for the Postal Service’s Boston office says that they are actively looking for a new location in the Kenmore area, but have not yet secured one.

BU retained ownership of the land under all the buildings, issuing Beal a long-term ground lease, but ensuring that the University will have a say in the development of the area for many years to come.